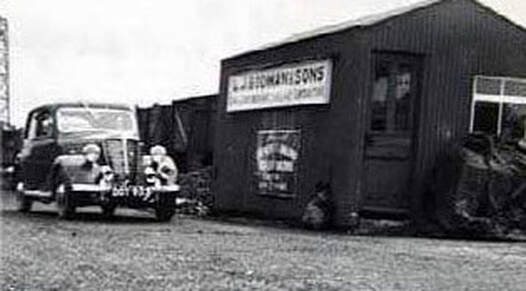 No publication on the Lambourn Valley Railway could ever be considered complete without mentioning the Bodman family. Fuel suppliers for many years to Lambourn and its surrounding district, the name Bodman became inextricably linked with Lambourn station. L. J. Bodman & Sons were also agents for The West of England Sack Company and hired out hessian sacks to local farmers during the harvesting season.
Lewis Bodman had operated a coal merchant's business in Lambourn since the First World War. He had two sons, George & Louis, both of whom stayed with the firm thoughout their entire working lives, eventually taking over the operation when their father died.
George, seen above, working in the station yard in the 1950s, still lives in Lambourn today and in 2020 celebrated his 90th birthday but, sadly, Louis passed away in 2003.

George willingly supplied all the pictures you see on this page for which I am extremely grateful. Any updates you can supply for this page would be gratefully received.