Welford Park Station marked the line's approximate half-way point. Named after the nearby private estate of Welford Park, the station served the villages of Welford, Wickham and Weston.

The station itself was unique, being home to the only crossing place for trains on the line. Consequently, it was the only station on the line that required both an up and a down platform. Despite its operational importance, it was one of the quieter stations from a traffic volume perspective, although traffic did increase after the airbase spur was opened in 1954.

There is another reason for considering it one of the most important stations on the line. The roots of the LVR are firmly embedded here by virtue of the fact that Welford Park estate was the ancestral home of one George Branston Eyre, who later changed his name to Archer-Houblon. This local entrepreneur, as we now know, was the instigator and then Chairman of the original, independent LVR Company. 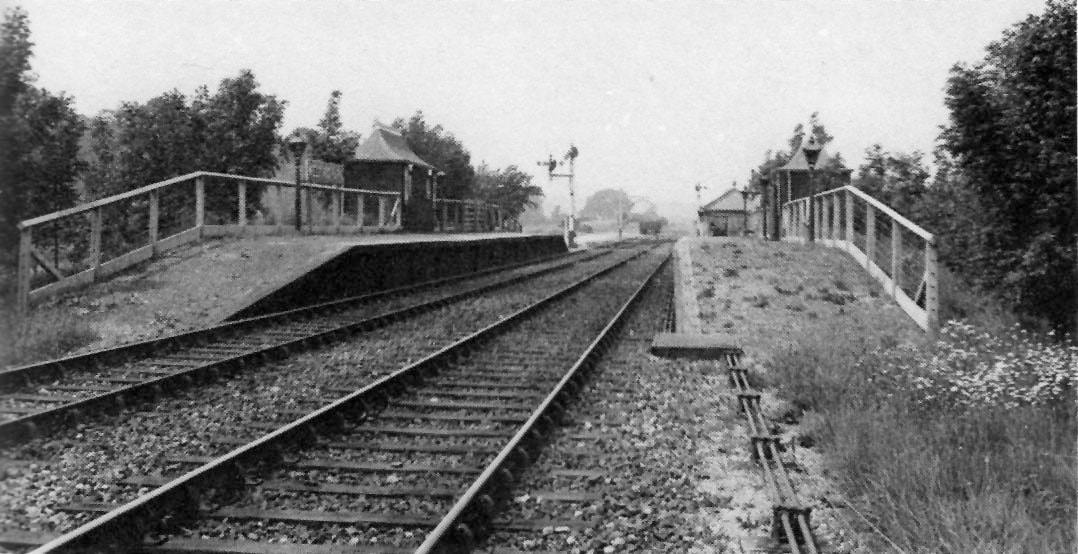 Infrastructure
The station was reconstructed by the GWR in late 1908; this view dates from around 1920. Corrugated iron pagoda waiting sheds were provided on each platform and a speed limit of 15mph was active through the approaches to the down loop. Also visible is the dog-leg point rodding, designed both to enable it to clear the 'up' platform, and doubling as an expansion bracket for the metal.

The station's water supply was primarily ferried in from Lambourn by train, but in 1954, mains water was piped in for the first time by connecting into the pipeline previously laid by the military line contractors in 1952. Despite the establishment during World War II of the nearby airbase, Welford Park saw no major rise in goods traffic.  Things, however, didn't stay totally static: the movement of additional livestock, plus the odd wagon-load of supplies for the camp did generate some increase.

In 1942, the GWR decided to construct a concrete loading dock to ease the loading and unloading of goods and livestock between rail and road vehicles. It was built into the end of the down platform, and the work was
carried out by the GWR engineering department at a cost of approximately £120.

The crossing loop could hold a locomotive and seven carriages and measured 312 ft. long. The booking office and up platform were accessible from the platform ramps via a boarded crossing.
Operations
The signalmen shared the responsibility for the general cleaning of the station and the internal appearance of the box itself. The quiet nature of the line resulted in the added advantage of allowing staff to enjoy unofficial activities during their hours of duty, such as the yearly crop of Welford tomatoes grown in front of the frame.

Throughout the 1930s, signalman worked a two-shift system, the first being 5am to 2pm, and the second covering 1pm through until 9pm. The overlapping hour was used to carry out any work in the yard such as the roping and sheeting of wagons where necessary, or just normal cleaning duties. 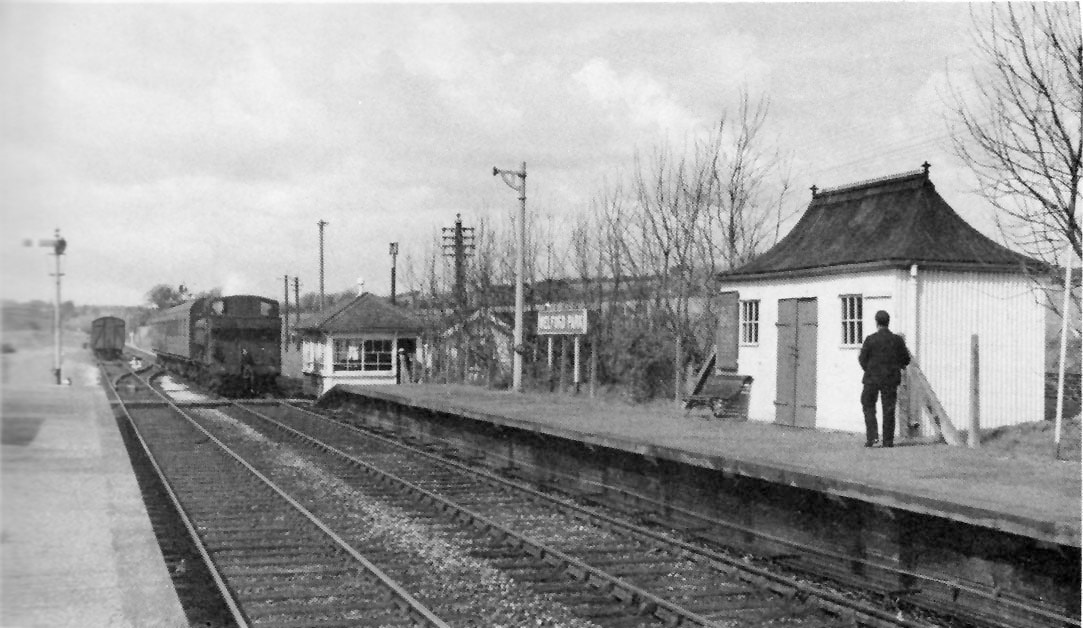 A sunny April day in 1959 and the arrival of a Newbury train. The cinder surface of the platform is clearly defined, as are the Tilley lamp posts and associated winding gear. At the Lambourn end of the platform, near the signal box, the ramps were edged with concrete. The signal box lever frame had itself been extended to 23 levers by this time. Situated immediately behind the pagoda and on a slightly higher level, were the airbase exchange sidings, constructed seven years earlier in 1952. 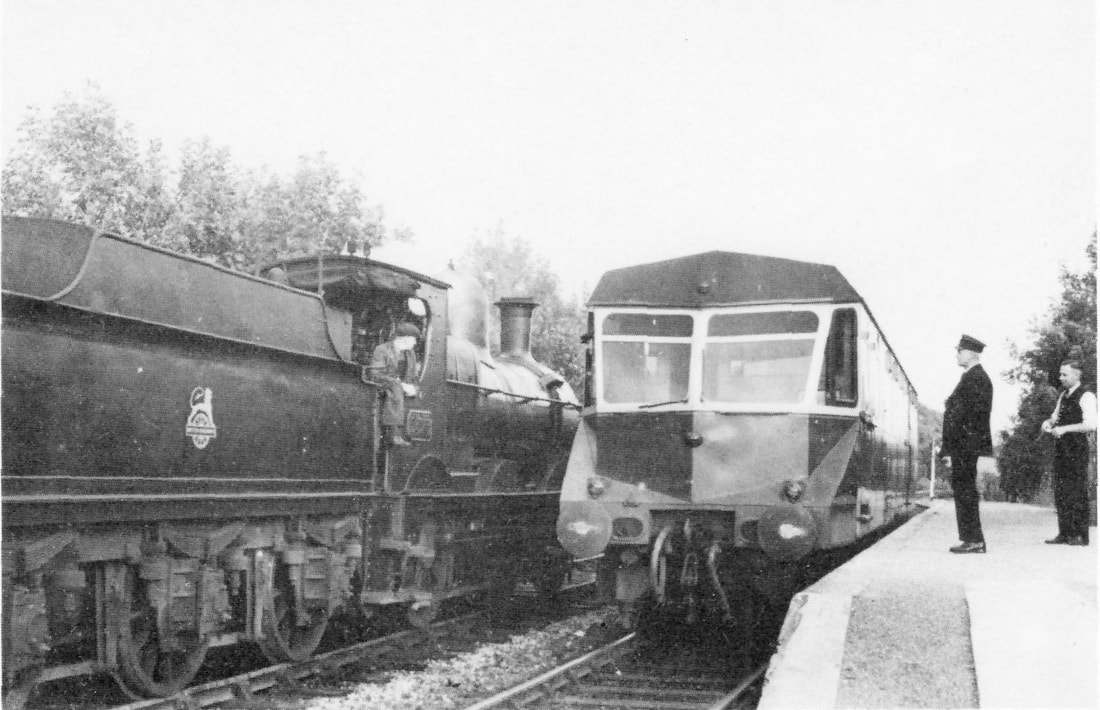 Old and new technology: trains crossing at Welford Park in the early 1950s. 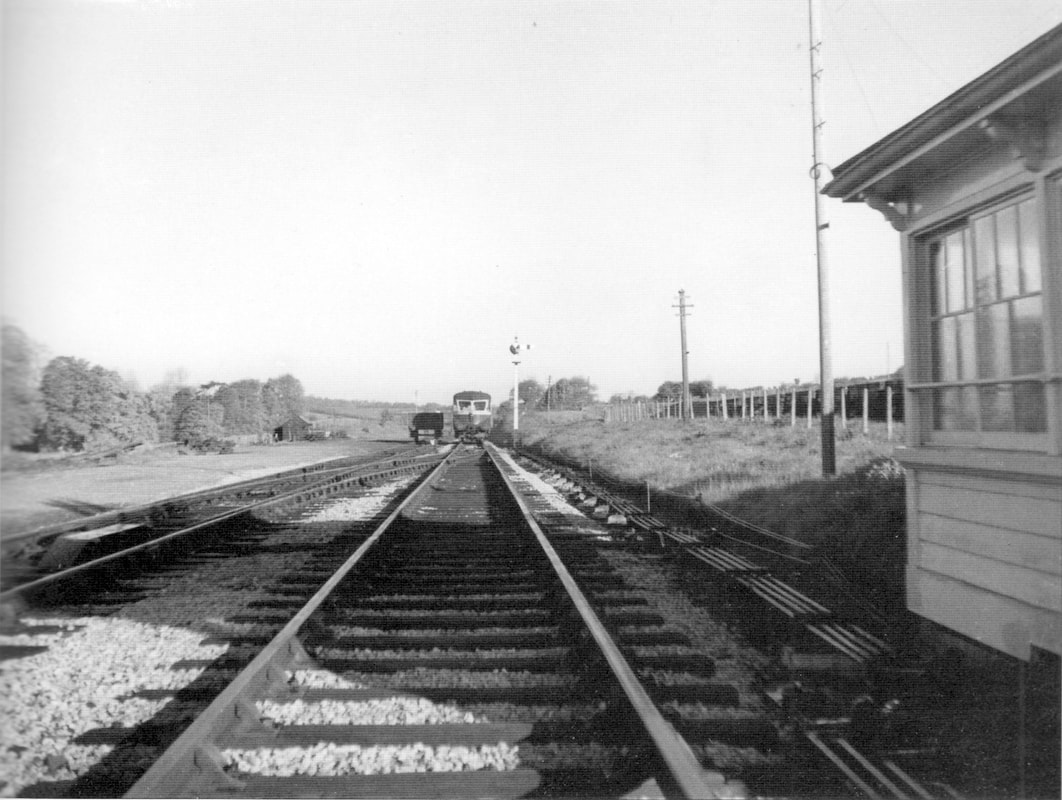 The railcar departs towards the north and all will be quiet for at least an hour. Note the single wagon in the goods siding, and the permanent way hut on the left, against the trees. Photo by signalman Bernard 'Curly' Smith 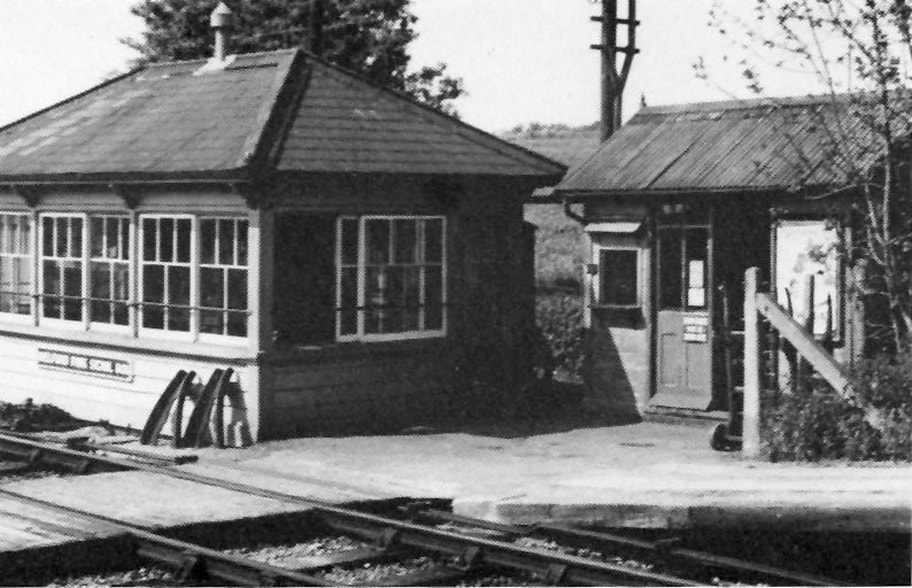 The cells providing power to operate the signalling equipment were stored in a battery cabinet which was fixed to the rear wall of the signal box. It is just visible in the above picture. The two re-railing ramps would have been used for minor wagon derailments and should have been stored within the signal box, but their sheer weight made it impractical to do so. 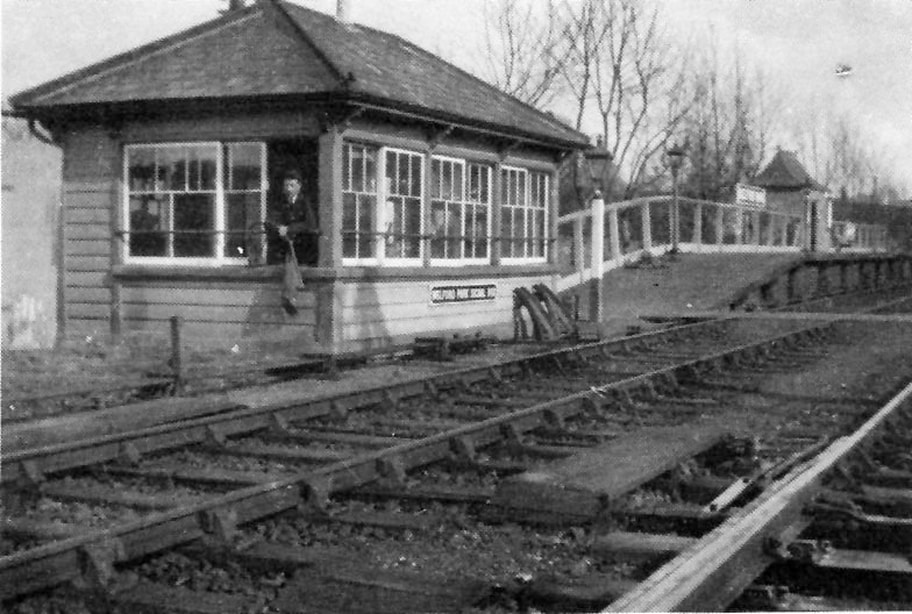 This, and the photo above show the signalbox and booking office. In the image immediately above, The lamp at the end of the platform illuminated both the board crossing and the tablet exchanges. The station re-railing ramps still lean nonchalantly against the front planking.
Welford Park signal box was graded as Class 5 and the weekly pay rate for a signalman here in 1934 was 51/9d (£2.58p). Duty times varied over the years in accordance with differing train services. Consequently there would be a number of times in the year when the opportunity to earn extra money, in the form of horse box cleaning over at Lambourn, became available for the signlman on early turn.

On 6th October 1947, the coal-fired stove used for heating the signal box ignited the framework of the roof, resulting in severe damage to the building. Repairs were subsequently carried out and the box was restored to its original design. 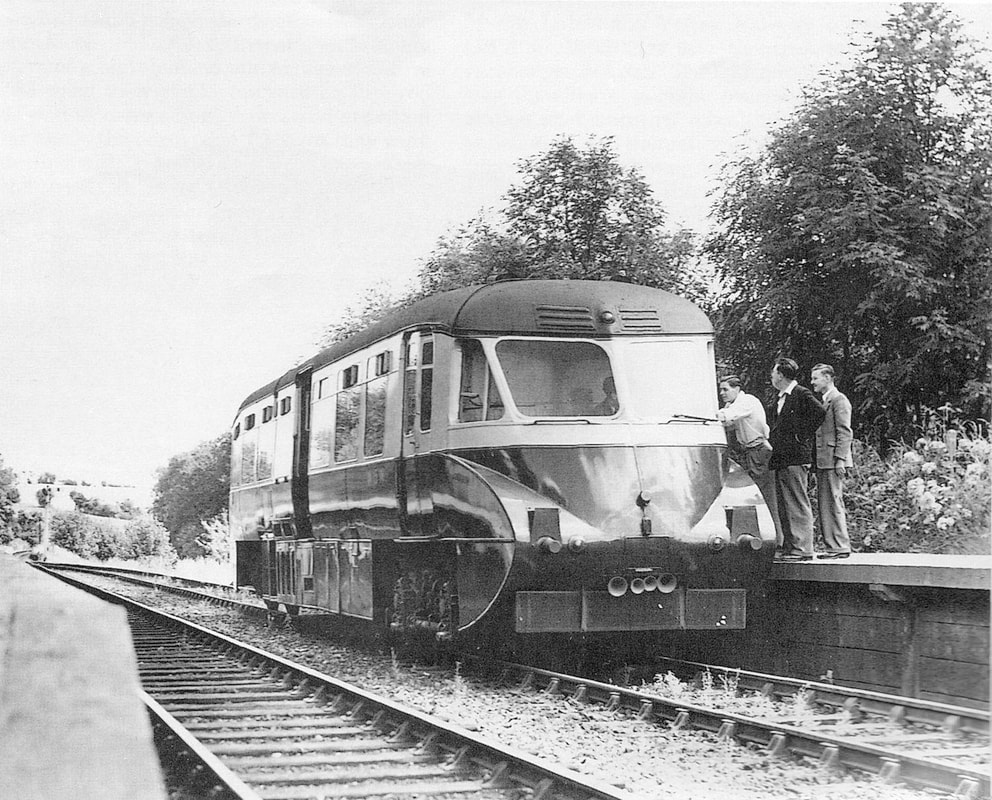 The railcar driver chats with Branch Line Society members. The image dates from the 1950s. 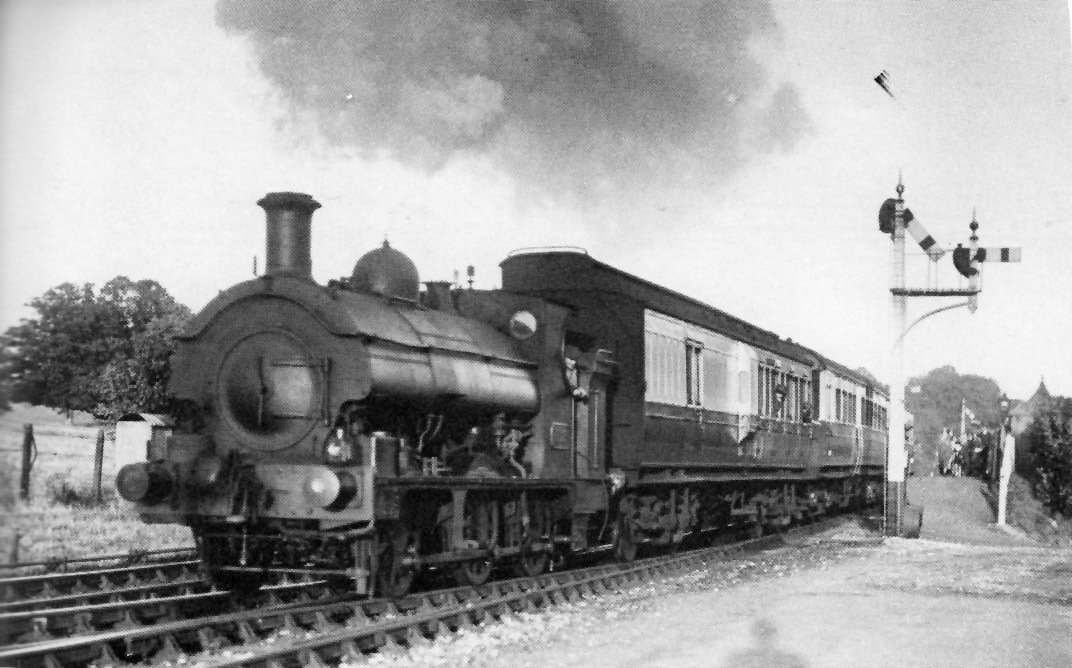 An 850 class saddle tank leaving with a Lambourn train some time between 1930 and 1934. Peeking out on the left is the oil shed, used for the storage of 40-gallon paraffin drums. Station lamps were attended to by station staff but signal lamps were maintained by the Newbury lampman. 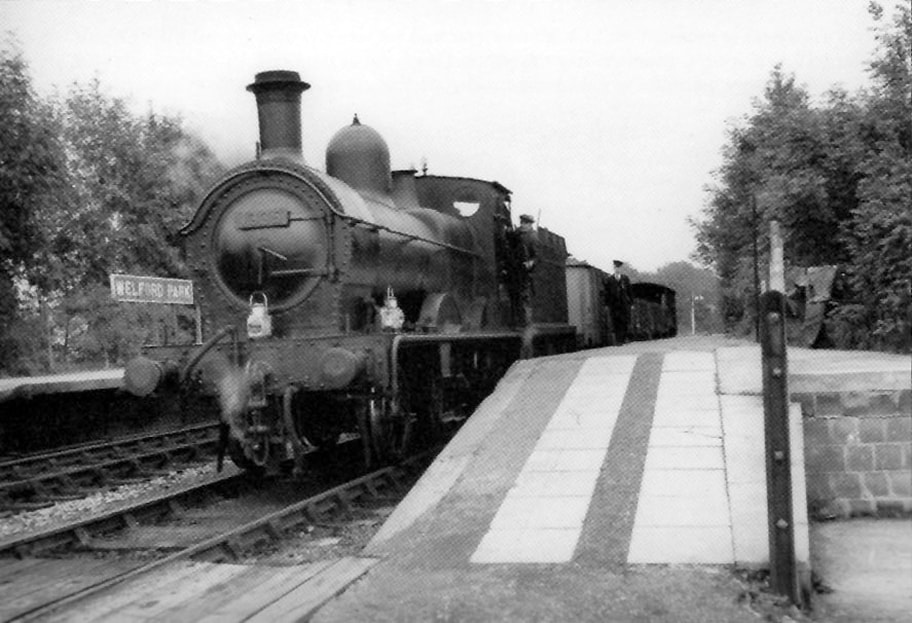 1951, and an ex-MSWJR 2-4-0 awaits departure clearance from the guard before continuing its journey to Lambourn. This photo also shows the vehicle loading dock at the end of the down platform. 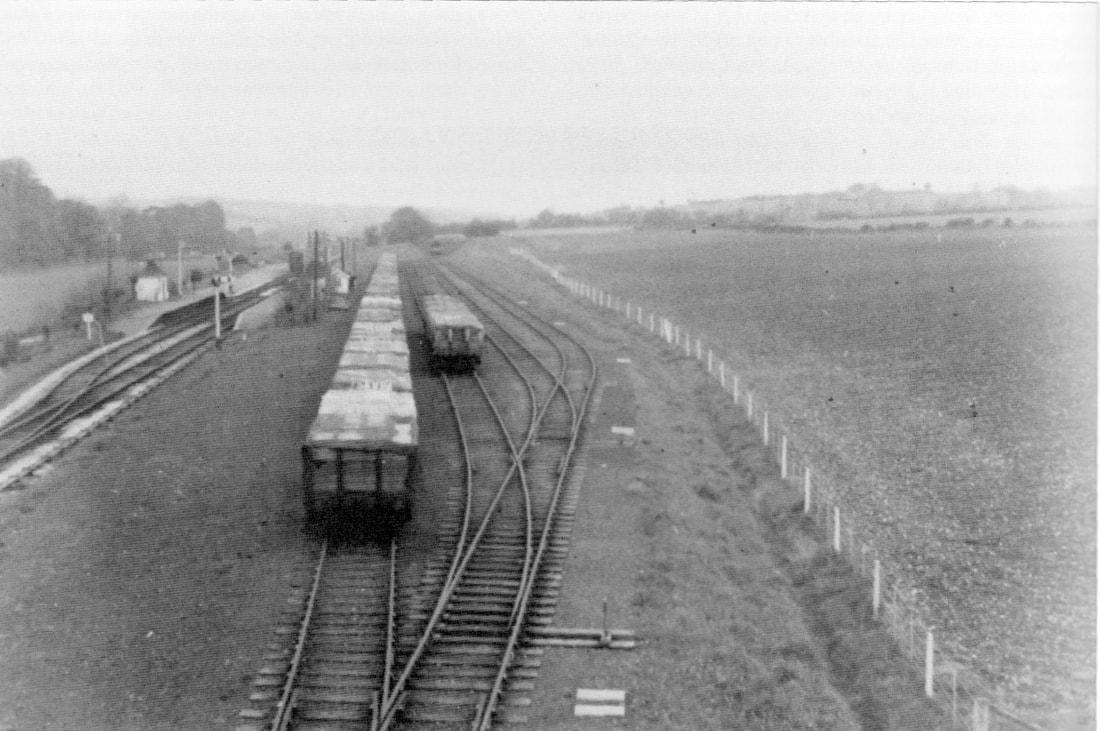 The image above shows the exchange sidings used for the military traffic associated with the Welford Airbase. Traffic left here would be picked up by a diesel locomotive from the base (see above, right). The gradient to the base was up to 1:80, so the loco had remain at the lower end of the train. This meant that one of the through lines sidings always had to be clear to allow the loco to run around the wagons.

Welford Park Station closed to passengers on 4th January 1960. Goods traffic continued on the line for a few more years until 1965, when Boxford lost all its freight facilities. Six months later, on 19th July, Welford Park's non-military services were withdrawn, and military use of the line ceased on 3rd November 1973. The USAF then returned control of the line to British Railways.