Model railways are a fascinating way of exploring how the railways used to look, could have looked, or how they look today. The amount of detail that some modellers manage to incorporate is astonishing.

As far as Lambourn is concerned, it falls into the GWR branch line category, which has long been one of the most popular types of model, due perhaps to the atractive colour schemes of the company's liveries, the countryside through which its lines ran, and an indescribable essene that the GWR brought to its activities. Also, it has to be said, branch lines fit better into small British homes.

As a couple of examples, the Dartford Model Railway Group has built a model of Lambourn, as has the Culm Valley Model Railway Club - this one looks highly accurate.

And Colin Robinson, below, describes his foray into modelling Lambourn, back in 1958.

As a teenager, I came across Lambourn on a hot summer's day with my father; the station appeared deserted and we were able freely to wander across the tracks and inspect the Collett goods 0-6-0 left simmering in a siding. The smell of creosote and engine oil remain with me. I made a model of Lambourn, and wrote an article about it and the line in The Model Railway News a couple of years later. Happy memories. Even now I use Lambourn as a prototype for some modelling.

Don't get excited, the model was pretty primitive and the article terribly pretentious; in mitigation I plead that I was only 15 years old m'lud.  I doubt it will add anything to the LVR canon. But for what it's worth, enjoy! 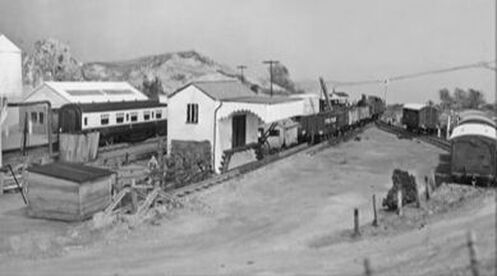 Lambourn station is at the northern end of a 12½ mile single line, branching from Newbury about 1/2 mile westward out of bay-platform 3, on the Berkshire-Hampshire section of the old Great Western Railway. Nine stations are served, in an area famous for horse breeding and training, and 11 passenger trains per day run over gradients not exceeding 1:60 – which occurs twice – with a timetable starting and finishing at Lambourn.

From my research into the line's history, which took me as far as the Houses of Parliament. I ascertained that schemes for a line started in 1873 and that eventually Act 176, authorising the construction of the Lambourn Valley Railway, was passed on August 2nd, 1883. 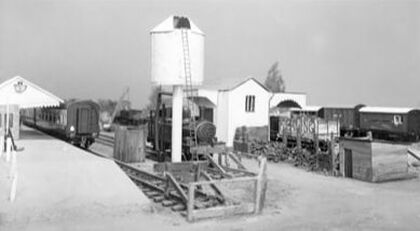 In later years of course, G.W.R. stock was used in great variety, and included a Dean 0-6-0, M. & S.W.J.R. 2-4-0s, 0-6-0 saddle tanks (often stored overnight in Lambourn's own shed up to 1925-30) and 57XX class pannier tanks (without cab back plates) hauling the classical auto-car trailers. Collett 0-6-0s have also been noted, and just prior to the last war, during G.W.R. experiments, A.E.C. railcars began frequenting the route.

Other passenger stock has included a 46 ½ ft suburban brake-third and a two-coach "B" set. Horse-boxes and coal wagons are abundant in and around Lambourn, two of the former being allocated to the line, marked " Return to Lambourn," and a G.W.R. gas-wagon lettered "No 7" is resident on the station sidings.

My first problem of modelling was a common one, that of insufficient space, for I live in a small London flat, and consequently I was compelled to reduce lengths to a minimum. Finally I built a baseboard 6 ft x 2 ft out of hardboard and 1 in. hard wood battens, and the unit was made portable. A greater length would certainly have done the model more justice, but nevertheless I feel that the results are satisfactory. The trackwork was laid with a proprietary flexible track, for I was not then in a position to re-equip myself with a more super-scale design.

The system is wired for two rail running, and has a 12 volt d.c. supply. All the superstructure was prepared from rough sketches with the aid of one or two photographs, but a further brief visit to Lambourn, en route from North Devon to London, served to refresh my memory and to make a few more notes. I found varied success in cardboard exteriors to buildings and huts, all of which have wooden frames, and I prepared the immediate surrounding earthworks by moulding in plaster, on a coke base to reduce weight. The ground surface was roughened with the usual sand and sawdust, was primed with matt enamels, and was finished in water colours.

In completing this replica of Lambourn I feel that I have achieved some small success in my first attempt; I do know that I have gained a tremendous amount of experience and railway knowledge.

Photos by Brian Jones
Thanks to Colin for giving permission to publish his article on www.lambournvalleyrailway.info