The Transport Act 1947, which came into effect on 1st January 1948, nationalised nearly all forms of public transport. British Railways came into existence as the business name of the Railway Executive of the British Transport Commission, and took over the assets of the Big Four railway companies. This included of course the GWR, and so the Lambourn Valley Railway became an offshoot of BR's Western Region, which unlike the  boundaries of the other three of the Big Four, corresponded pretty closely with the previous boundaries of the GWR.

Not much else changed on the LVR. As we have remarked, traffic volumes remained firm, probably in no small part as a consequence of the post-war austerity and the lack of consumer money to buy motorcars.

BR's Modernisation Plan came and went, but the LVR was soon to enter to a slow decline from which it would not recover.

It wasn't all misery and decline though. Fireman Bob Crump remembered firing on the LVR branch in the 1950s, as reported in the Great Western Railway Journal, Spring 2002 edition. He recalled the Lambourn trains hauled by a 1335 or a 1336 struggling to get up the bank to Stockcross & Bagnor – shown in the working timetable as quite a climb at 1 in 75 – because the combination of a 5mph restriction across the canal bridge and greasy rails caused the 13s to slip to a standstill. The 22XXs were more sure-footed and fared better.

One of the things about the LVR that stuck in Bob's memory was the friendly people along the line.
"Most of the people waved as the train went by. However, the occupants of a wooden bungalow just between Eastbury and Boghampton [sic] even waved a lamp at the window at night – we always returned the wave."

The construction of interchange sidings at Welford Park and a new line to Welford airbase got under way in 1952, bringing with it some alterations to the signalling system and the hope that the line would face a more secure future. Come August 1954, traffic losses were still giving cause for concern. In a further attempt to reduce expenses, British Rail reduced the status of Boxford station to that of an unstaffed halt. Ticket revenue would be collected by the guard en route. 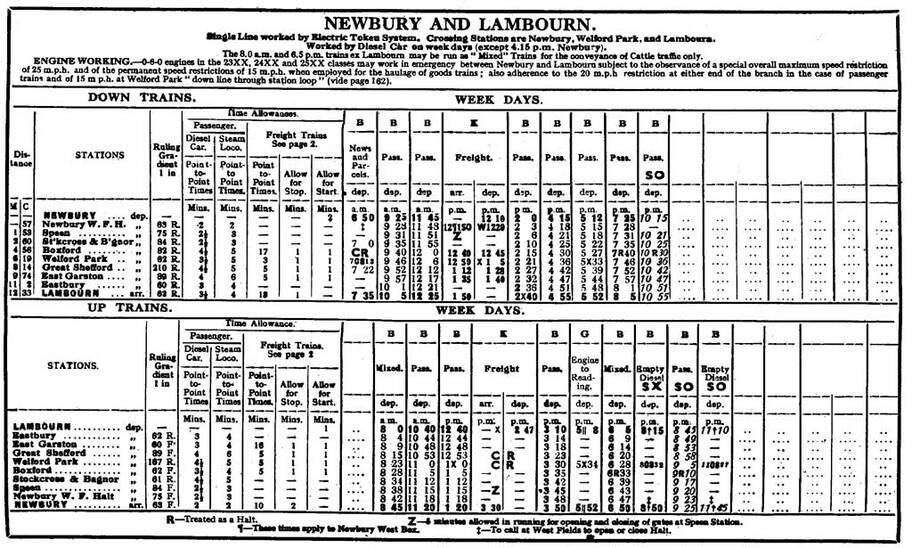 A working timetable from the 1950s.
In 1956, the diesel railcars were displaced and steam-powered services reintroduced to the line. Following the complete withdrawal of the Dean Goods and M&SWJ 2-4-0s from service in the early 1950s, BR's Western Region had little option but to approve the use of more modern, heavier steam engines on the branch. This led to 57xx pannier tank engines and 22xx tender engines appearing on services, a situation that was to endure until the line closed.

1956 also saw the removal of West Fields Halt as a stopping place, coinciding with the new Winter timetable. The halt was officially closed on 4th February 1957 and, shortly after, both shelter and platform were demolished. The financial situation worsened, culminating in BR's issuance of a notice of closure in June 1959 of all passenger services on the line. BR announced plans to retain the line only as far as Welford Park which then became the Lambourn Valley Railhead. 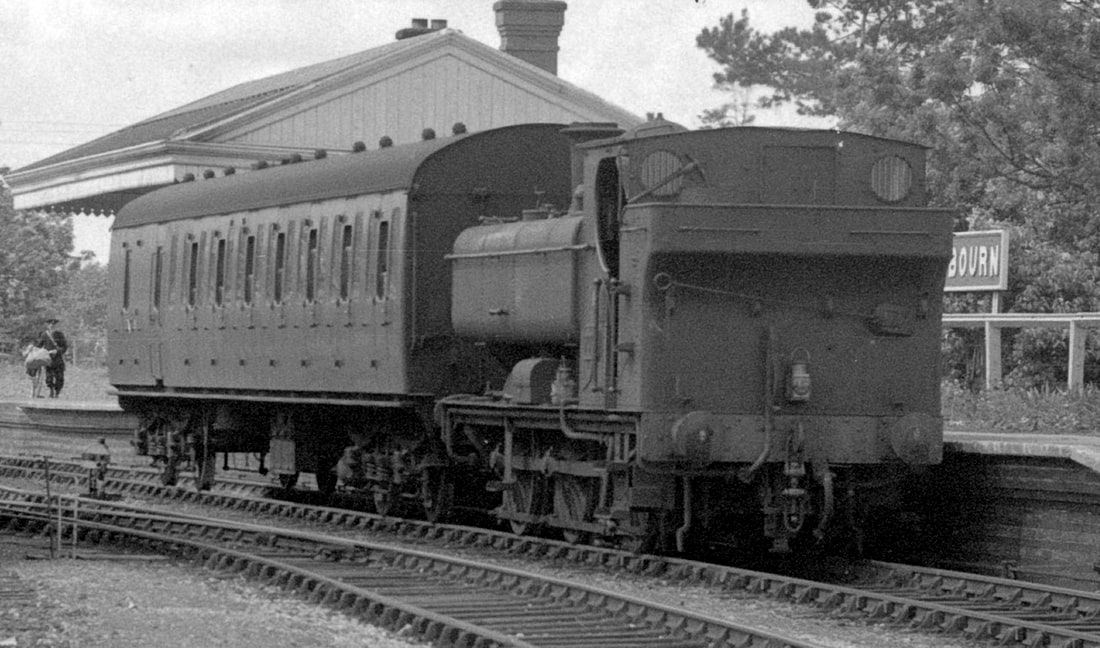 Lambourn station in 1957, with a Pannier Tank in charge of a single coach. It's warm enough for most of the windows to be open, and the postman is wheeling a bag of post towards the train. But the line has under three years of life left.

No. 4670 with a train to Lambourn on the last day of operation. Photo: Roger Joanes 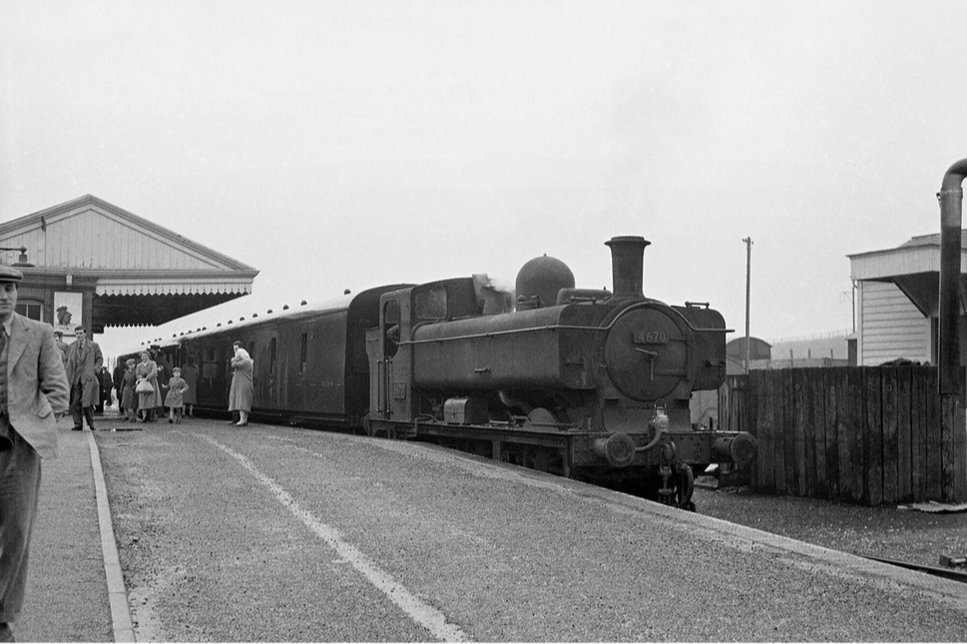 No. 4670 has just arrived from Newbury on the last day of operation. Photo: Roger Joanes 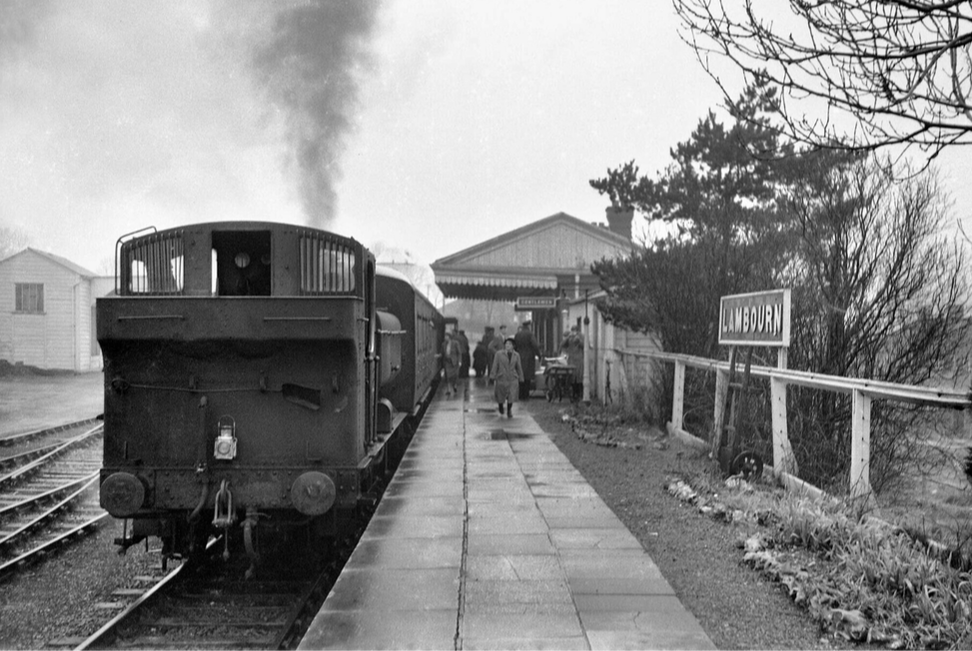 No. 4670 with a train for Newbury on the last day of operation. Photo: Roger Joanes

The 4th January 1960 was the last day of passenger services. Thoughout the day, enthusiasts and local people alike turned out to enjoy a final journey on the line, or simply to wave goodbye. The last train out of Newbury, the 5.20pm, required six coaches to accommodate the waiting passengers.

And so it was, on a dark winter's night, almost 62 years after its inauguration, the Lambourn Valley Railway ceased to exist as a fully operational, passenger branch line.

After closure: The Enthusiasts' Special in 1969

As part of the line remained open, enthusiasm for the line also remained. So on October 1969, a special train was laid on for enthusiasts to travel the remaining part of the line for what most considered to be their last opportunity to do so.

Following the demise of the passenger service, a goods service was introduced to the line. This ran Monday to Friday and terminated at Welford Park. Besides military cargo, the only goods carried were coal and agricultural commodities. Motive power was normally supplied by the Newbury Town Pilot, a 350hp diesel locomotive, although there were exceptions. The maximum authorised load outbound from Newbury station was 29 basic wagon units and 24 units on the return journey. Ordinary goods traffic was interspersed with military traffic bound for the American airbase at Welford.

The track north of Welford Park was lifted in 1962 and the up platform was also demolished. In 1965, Boxford lost all its freight facilities.
Six months later, all non-military services were withdrawn from Welford Park. During the latter part of 1970, agreement with BR was finally reached and the USAF took over all traffic operations.

On the 14th of February 1970 the tracks were once more to carry a passenger train in the form of a Diesel Multiple Unit. The "Isis" tour, whch included numerous other locations, was organised by The Locomotive Club of Great Britain. A very final run along what remained of the LVR took place in 1973.

Two images above: leaving Boxford for Newbury
<< The GWR Years | The End of the line >>