At a glance: the LVR story

Sixty years from start to finish

The LVR story in a nutshell

The Lambourn Valley Railway was built some 50 years after the railway building frenzy of the 1840s and 1850s, which saw the creation of a significant proportion of the British railway network that still exists today. So the LVR was late to the party - and it closed - or rather, faded away - before the railway closure frenzy of the Beeching years in the mid-1960s.

You could say that the LVR in fact avoided any kind of frenzy, and maybe its sleepy, quiet character proved to be the agent of its downfall: not enough people used it to keep it going. Service along the full length of the line lasted just over 60 years. And it's now been over 60 years since it closed - as long or longer than the line's lifespan as a passenger railway.

Despite that, the LVR was a line with character, and for most of its existence, boasted good reasons for remaining open for business.

Yet like so many quiet branch lines, it was vulnerable to the growth of rival bus services. And, after the second world war, it suffered both from the massive explosion in car ownership and the flight generally of passengers to individual modes of travel, and the flexibility of point-to-point journeys for goods enabled by the lorry. That, and the general assumption that the railway was a mode of transport which belonged to the past; roads were seen as the future - and we know that turned out: congestion, pollution and global warming.

So while the steam-powered LVR could not survive the onslaught of the internal combustion engine, many still argue locally in favour the line's re-opening, unlikely though that seems given the cost of rebuilding a modern railway over a now heavily built-over track bed. Were the track still there, maybe today's efficient battery-driven or diesel multiple units allied to the huge growth in rail passenger numbers that we've seen in the 21st century could make a business case for re-opening it - who knows...?

The LVR line became operational on 2nd April 1898. Financed almost entirely by Colonel Archer-Houblon, it ran as an independent company until 1905 after which time it was owned and managed by the the Great Western Railway. 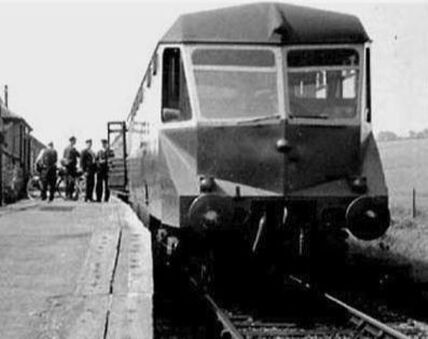 When the GWR took full control, it laid plans to increase the existing facilities and introduce general line improvements. In 1907, a new halt was added at Newbury West Fields and the small original buildings at Lambourn were replaced by a larger, more modern brick-built structure, using a GWR standard design, on a platform of regulation height. Subsequently, all stopping places on the line were provided with standard-height platforms, and all  the buildings acquired a distinctly Great Western character.

Motive power and rolling stock were quite varied for a small branch line. Locos included custom-built locomotives during the early, independent years, and under the GWR and BR's auspices, Dean Goods engines, both steam and diesel railmotors (like the one on the left), pannier and saddle tank engines, and more. Rolling stock included auto-coaches (though they were only used as ordinary coaches on the LVR), clerestory coaches, four and six-wheelers, horse boxes, a variety of goods wagons, plus of course the ubiquitous coal wagons for the delivery of coal to households and businesses along the valley, as well as to the railway itself.

By around 1910, large-scale improvements included replacement of the entire track using second-hand GWR stock. In 1948, the line became part of nationalised British Railways, under whose aegis the LVR stayed until its final closure. It closed to passengers on 5 January 1960, an event still mourned by locals today, but the southern half remained open for freight for a further 13 years.

In 1973, an enthusiasts' rail tour marked the complete closure of the line, following which the track was quickly ripped up, although many of the original buildings survived for a few more years.

A trip along the line

Starting at Newbury, the line which was single-track throughout ran parallel to the main line for half a mile, up a steep gradient, and veered off to the north west. Westfields Halt was not one of the original stations but was added in 1907 by the GWR. 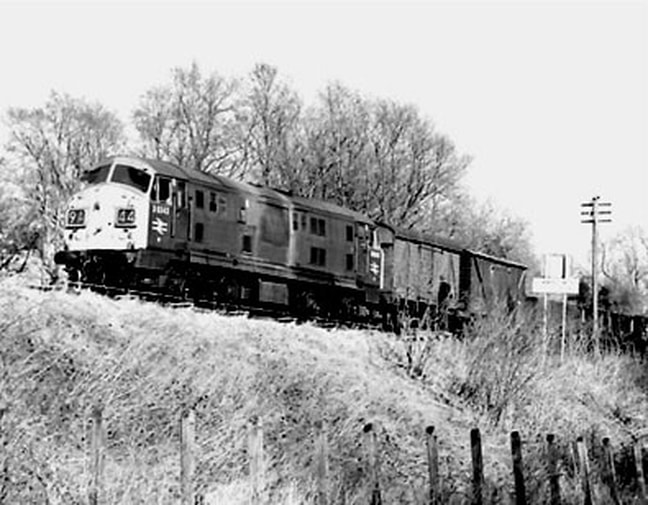 A BR diesel hauls the daily goods train after closure of the northern half of the line
The Lambourn Valley Railway line was just over 12 miles long, and the journey from Newbury to Lambourn took about 40 minutes. It left Newbury Station from bay platform 3 and headed west, parallel with the GWR tracks, for about half a mile.

At this point, the branch line turned north, encountering a 1 in 63 gradient. Just beyond West Fields Halt, the line levelled out to cross the River Kennet and its tributaries over a long girder bridge. From here it continued onto Speen, passing through a deep cutting and two tunnel bridges, one of which took the track under the main London to Bath road. 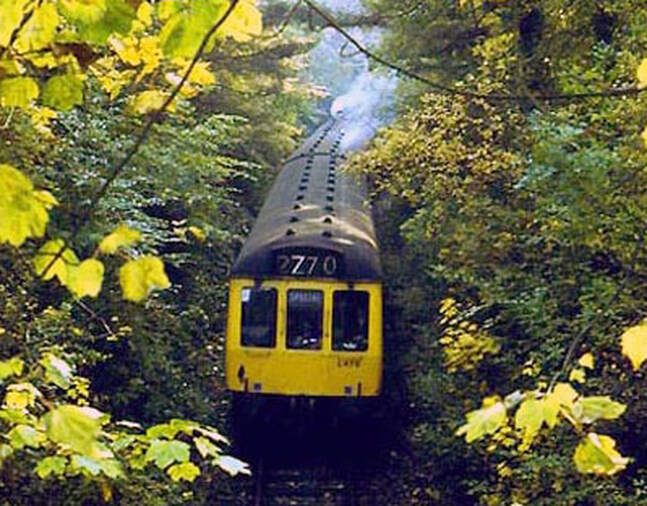 A 1960s diesel multiple unit on the last enthusiast tour just before closure on 3 November 1973. And getting scratched to bits by overgrown vegetation in the process...
Speen Halt was just one-and-three quarter miles from Newbury. The station was equipped with a level crossing and a small shelter but no sidings. For the rest of its journey, it followed the north-westerly course of the River Lambourn. The line resumed its steady climb, passing through Stockcross and Bagnor Halt until it reached the village of Boxford.

Boxford was approached along an embankment and the station itself consisted of a siding loop and a small office. From Boxford, the climb continued in part at 1 in 75 before reaching its halfway point at Welford Park.

Welford Park station sported both up and down platforms, small offices and waiting rooms, plus a ground frame and siding. The following stretch of track was fairly straight and level and brought the line to Great Shefford. Eight and a quarter miles from Newbury, Great Shefford station was home to a small goods yard on the south side of the line, and featured a scissors crossover with a siding from two tracks that backed on to a cattle dock.

The final stage of the the line into Lambourn contained a whole series of gradients: a climb of 1 in 82 out of Great Shefford before levelling out through open country to East Garston, and beyond that, an ascent of 1 in 60 preceded a short descent of 1 in 200 running into Eastbury Halt. After crossing the main road at Bockhampton, the line made its final climb on gradients of 1 in 63, easing to 1 in 100 before entering Lambourn station.

Lambourn Station boasted the most extensive layout of all. In addition to the station buildings it had a signal box, loading dock and offices, and in the earlier years, a small engine shed. 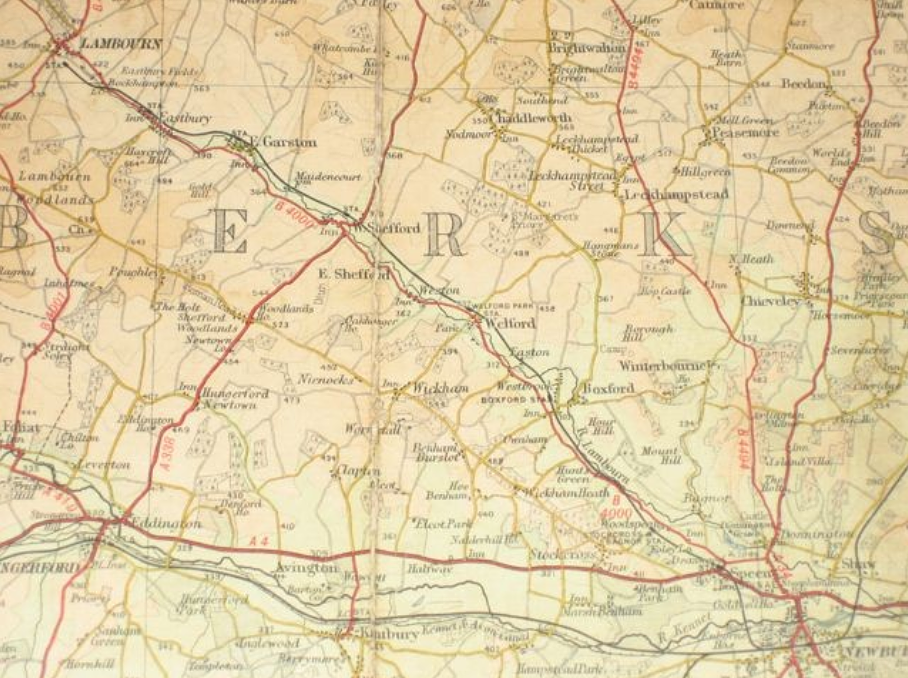 Next stop: The Independent Years