The spur line from Welford was constructed to serve an airforce base that lies some three miles from Welford Park Station. The airfield itself dates from World War II and during its occupation by the USAF, it had two purposes, the first as a conventional bomber squadron station and the second as a base for secret, unpowered glider experiments.

In 1945, custody of the base was returned to RAF and its future role was to be a storage depot. The Ministry of Defence decided the construction of a rail link for the movement of arms and munitions etc was now a priority. Naturally, most of the plans and discussions that took place regarding the propoposed new railway line were carried out in secret. However, we do know that the rail link was originally intended to connect with the branch line at Boxford. Ultimately though, Welford Park was chosen and, towards the end of July 1952, a start was made on the two-and-a-quarter mile stretch of new track. The work involved the laying of four interchange sidings at Welford Park and a new single line which ran alongside the branch for a short distance before heading north-east into the camp.
The first cutting was followed by an embankment and then by a second, much deeper cutting.
A high percentage of the construction materials was brought in by rail, as was the contractor's locomotive. The loco was transported on a crocodile-type well wagon. The new track also arrived this way. Why the engine needed such treatment is a mystery. Presumably, there would have been a valid reason as it would have seemed more appropriate, and easier, to have brought it in under its own steam. A likely reason, one might suppose, would be British Railways' in-built resistance to non-BR locos using BR-owned tracks.

Looking south towards Newbury, a view of the completed interchange sidings and runaround at Welford Park. Each siding could hold 40 wagons, even though British Railways had placed a maximum restriction of 15 wagons per train on the Lambourn branch itself. BR was also unwilling to allow longer, double-headed trains to use the line.

The new spur now begining to take shape as it enters the newly formed cutting. The Lambourn Branch line can be seen to the right of the picture. The intricate network of sidings meandered between a wide and varied assortment of buildings and storage areas. However, the track within the base was of light construction and was not popular with British Rail.
Arrival at the eastern perimeter of the camp would encounter an assortment of sidings. These were linked to tracks that connected directly to other areas within the airbase itself. The sidings were partly built on an embankment and required the presence of a catch point to protect Welford Park against runaways. The single-track engine shed pictured above right, was situated in the south-eastern corner of the camp and was used for servicing and minor repairs, but any major work including overhauls would require the removal of the locomotive to a suitable MoD establishment.
The branch line itself required modifications to accommodate the new line, among which was the construction of a second span alongside an existing iron bridge - see below. 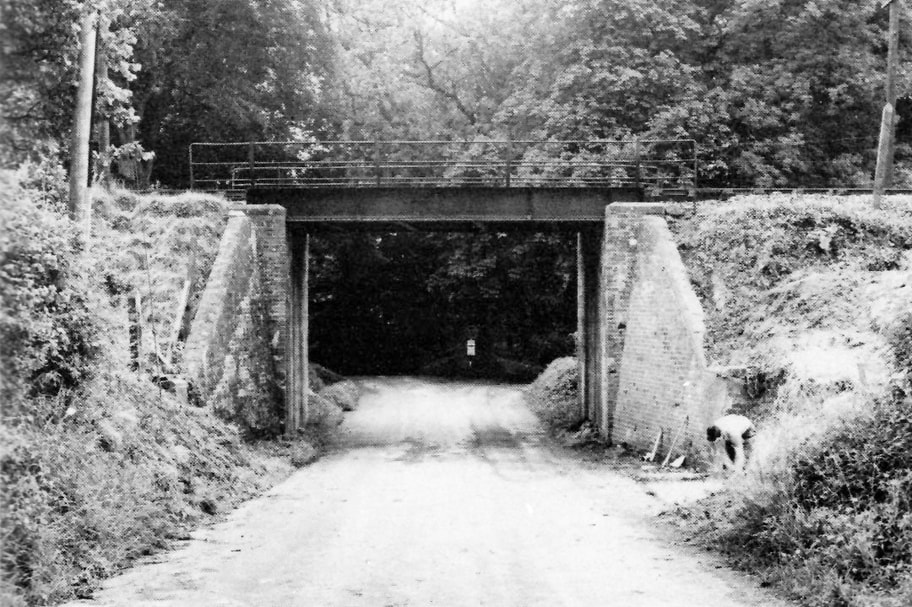 The original overbridge at Welford 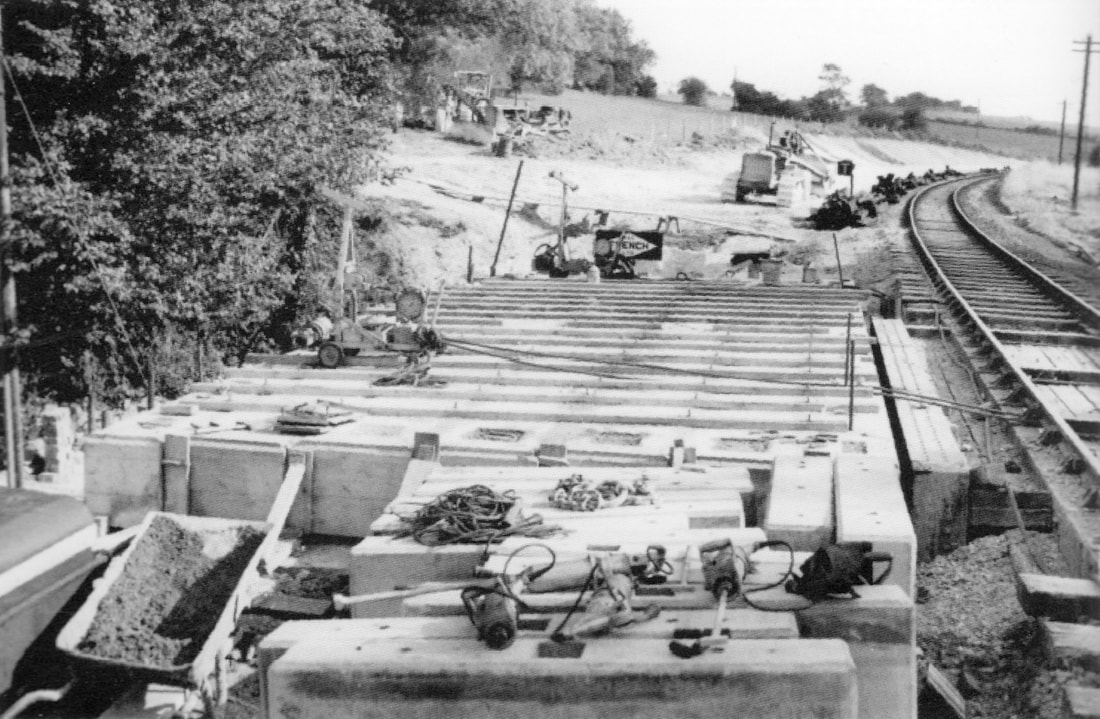 The new bridge under construction 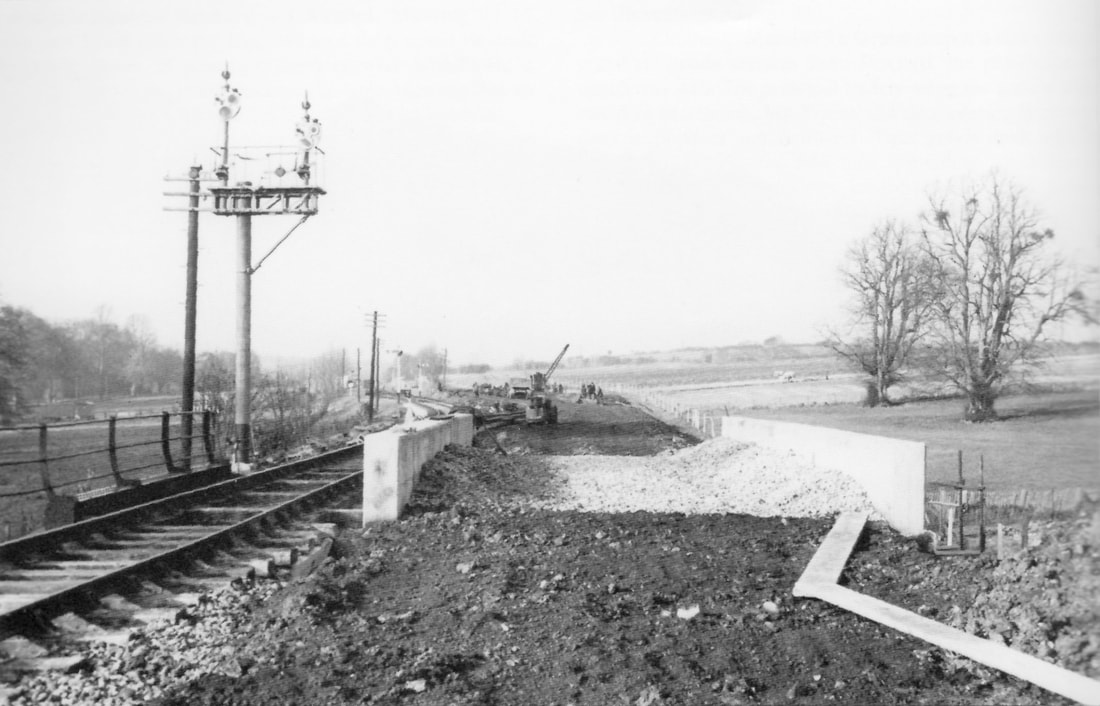 Looking over the new bridge towards the station. Note that the signal engineers have been busy, with the new brackets already in place.

On a personal note...

Can anyone throw any light on the subject as to why the new bridge had a longer span than the original one? The road it crosses was, and still is, a very minor one. Even in the 1950s, it was never likely to fall victim to any road widening schemes.

The following was received from Reg Tarbox, Jan 2003:

Ken.....
Just been on the Welford line trying to rekindle some old memories. I saw that you were asking why the new bridge had a longer span. Could it have been due to the weight of the munitions carried to and from the base. During a Middle East crisis, I was there and saw the goods wagons loaded with HE bombs. There is no doubt in my mind that they weighed far more than a carriage full of passengers. Just a thought. The railway also ran through the revetments where the munitions were stored but I doubt if pictures of that will ever come to light as it was a restricted area.
Cheers, Reg.