Just over a mile from Lambourn, the rural Eastbury Halt was similar in size to the other stations on the line, originally built with the nine-inch high platform, but without the standard wooden office favoured by the LVR. Neither was it provided with the usual pagoda shelter after the GWR took it over in 1905. 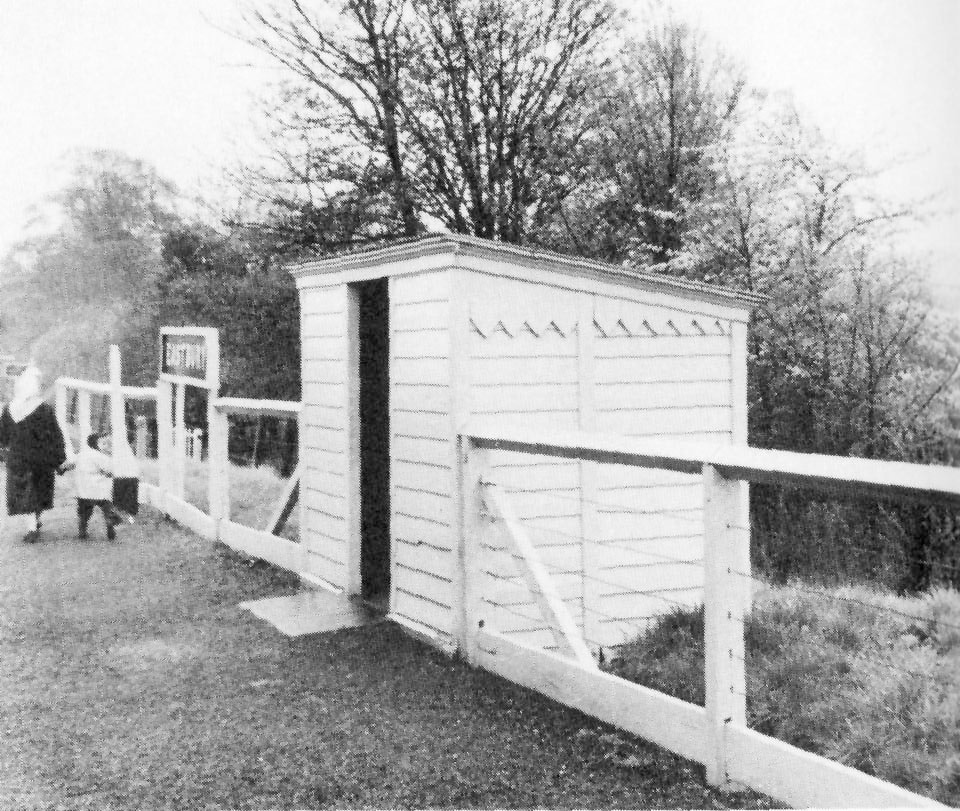 The Eastbury shelter, in the 1950s. Like the Lambourn goods shed, this was one of the LVR's original structures which survived throughout the life of the line. Photo: R. J. Buckley
Shelter for Eastbury passengers took the form of a simple wooden shed the twin of which could be found at Stockcross and Bagnor stations during the line's early period. A local carpenter had been commisioned by the LVR to construct various fixtures and fittings for the company, seating and numerous other structures being part of his brief. Both shelters may well have been part of his original work requisite.

In 1901, the population of Eastbury stood at just 254. That fact, coupled with the station's close proximity to Lambourn and East Garston, meant that goods traffic handled here would be minimal. Barnards, the Eastbury based coal merchant, did actually receive its coal deliveries by rail but it was in fact collected by them from East Garston station, two miles up the line.

One anecdote suggests that locals preferred to tell the time by the trains rather than travel on them. Local folklore also claims that Eastbury church congregation would listen for the Sunday evening train leaving the station, as the sound of the departing engine would leave them content in the knowledge that the service they were attending was nearing completion.

By far the largest proportion of what traffic there was came from the Baylis family. Milk from its sizable dairy herd was transported in churns to the station and left on the platform for collection, so the guard of the Sunday milk train regularly arrived to find anything up to two or three dozen milk churns awaiting onward transmission. It being Sunday, he was required to load these unaided, a task that must have taken some considerable time to complete.

Occasionally, the odd horse would be loaded from here but with purpose-built loading facilities at East Garston and Great Shefford, most preferred to go the extra mile or two and do the job safely. For example, the local coal merchant, Mr. Barnard, was based close to the station but received deliveries at East Garston. As a consequence, goods tail traffic was very rare here.

The station was reached by way of a narrow lane from the village which continued on over the crossing and onto Eastbury Downs. As the name suggests, this part of the line travelled through some very exposed countryside. In the summer, it offered the passenger superb views of the rolling downs, but in winter it was extremely vulnerable to drifting snow, the worst of which was the infamous winter of 1947 when services were badly disrupted.

At the outset, three passenger trains per day operated in both directions on Mondays, Tuesdays, Wednesdays and Fridays. There were four on Thursdays, five on Saturdays and none on Sundays. In 1912, the GWR finally introduced a Sunday passenger service.

The Sunday milk train was introduced later. The second-class fare from Eastbury to Newbury was just one shilling (5p) and the five-minute journey to Lambourn cost the princely sum of tuppence, about one penny in today's money - before inflation.