Photo above by Lens of Sutton
Looking north in the direction of Lambourn, this early view (above) of the refurbished GWR Station shows that the original wooden LVR office at the far end of the platform, had been extended to effectively twice its size. This new building was constructed by the GWR between 1908 and 1911. The post and wire platform fencing remained intact until closure in 1960. At rest in the loading dock is a privately owned horse-box, most likely one of three belonging to R.C. Dawson of Whatcombe Stables.

Viewed from the Lambourn end, the station looks resplendent with its new coat of paint. The wooden office's extension is clear, with no windows and only plain, non-patterned barge boards, although the GWR largely maintained the original's character. 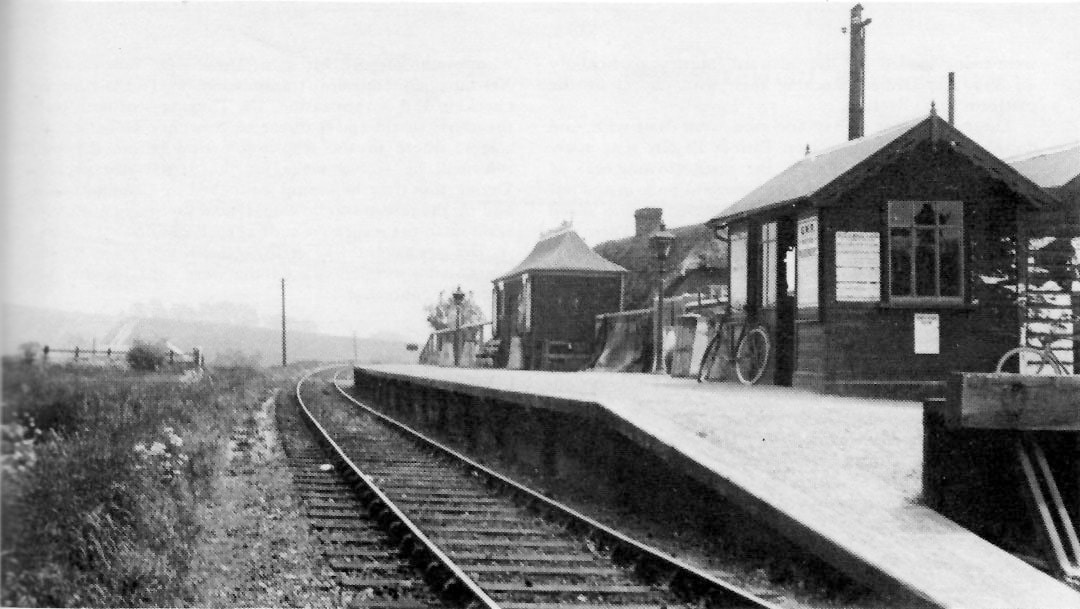 The station in 1919, looking south towards Newbury, before it acquired the coat of paint seen above. The extension to the wooden building was used for additional secure storage. Note the wagon tarpaulin laid out to dry over the fence.
Built on marshy ground, the station handled a considerable volume of traffic, far more than the other intermediate stations. In view of this, the original configuration of a single loop siding was enhanced by the GWR in 1910 as part of the line's general upgrading process. An 80-foot horse loading dock was constructed with rail access from the Lambourn end by means of a scissors crossover. An additional dead-end siding was installed to serve this newly built loading dock.

The scissors crossover (seen in the images below) was controlled from a ground frame (south) with three levers incorporating point discs. Access to the opposite end of the yard was gained via a two-lever frame (north). The total cost of this upgrade to the line was listed as being £1,284. It included raising the platform and the erection of the now-mandatory GWR pagoda waiting shelter. 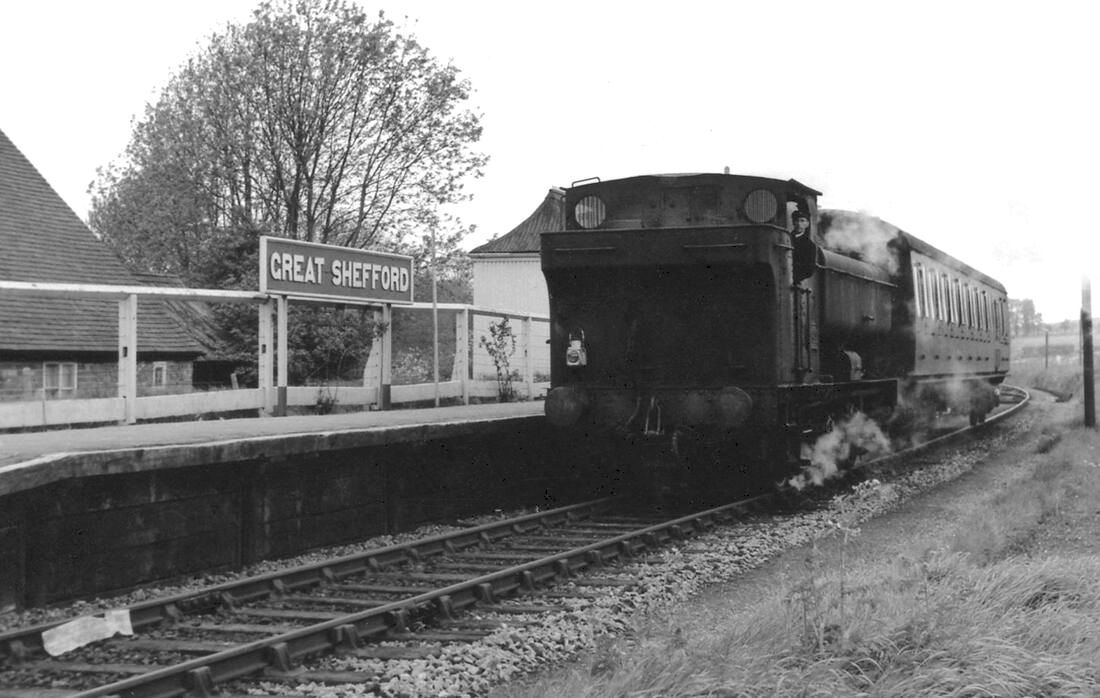 I bought this at a boot sale some 20 years ago for the princely sum of 15 pence. No info on it other than the date pencilled in on the back - 1958. Ken Tarbox (2020)
Traffic at Great Shefford gained rapid momentum from the early 1900s, its location being ideally suited to the many local farmers. The transport of milk from the surrounding area was a major factor, one farm alone being responsible for the daily despatch, in large churns, of more than 200 gallons of milk. Hay and corn were also dealt with in large quantities. Bales of straw would be dispatched to Swanwick during the strawberry season, Swanwick being the main strawberry growing area of Hampshire.
Tail traffic was well supported both in and out or the station. The transportation of cattle and sheep along with the occasional race meeting contender made up the bulk of the content for this form of traffic. 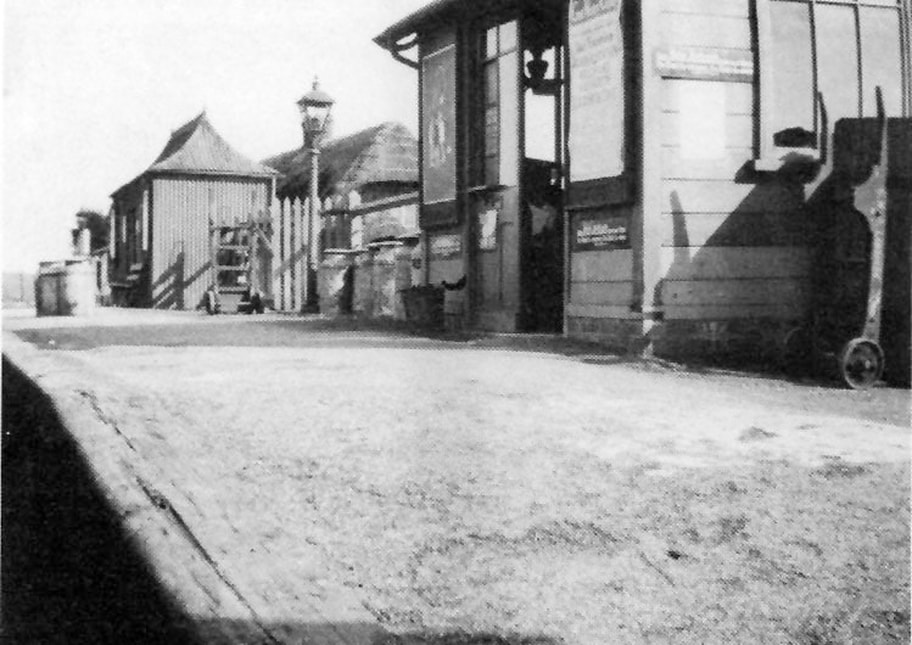 The station furniture is superbly depicted in this photo from the 1930s. Two platform hand trucks were provided both clearly marked 'G.W.R. Lambourn'. In the early 1940s, a passing engine set alight the thatched roof that is just visible to the rear the pagoda shelter, resulting in its complete replacement.
Coal was stored in the yard under the business control of W. Sayers; Messrs. Gear also traded from here. Business was increasing to such an extent that as early as 1914, the GWR found it neccessary to employ an additional porter to augment the duties with the existing man.

The two porters operated shifts that had a considerable amount of overlap built into them. This arrangement lifted the need for the early shift porter to return to the station to deal with the early evening train to Lambourn. 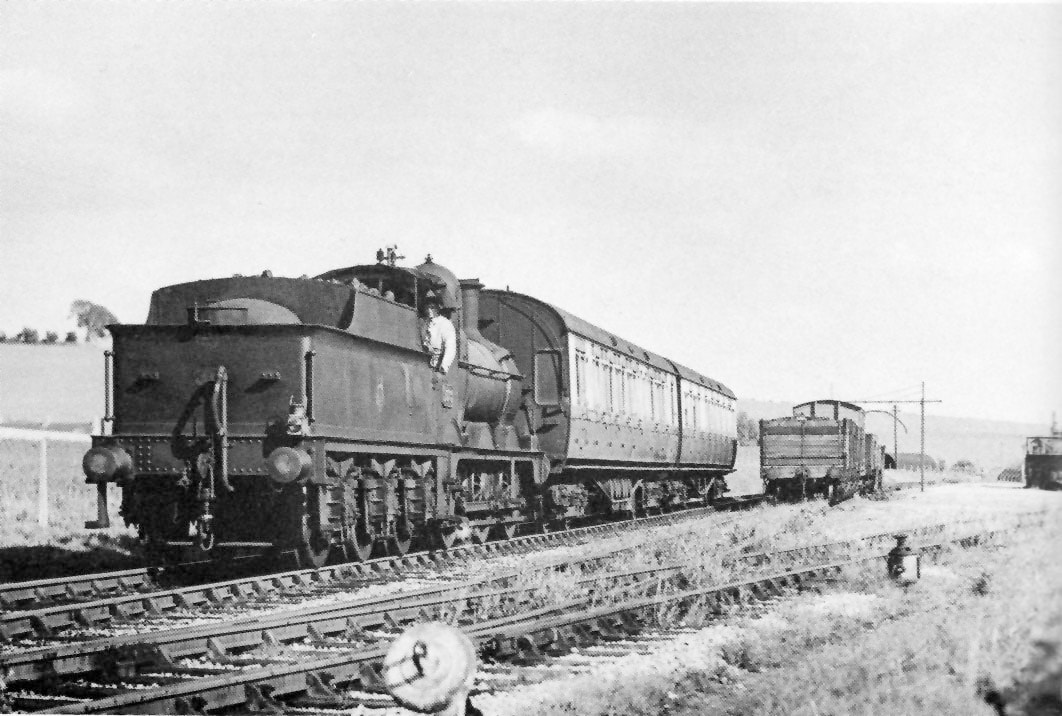 Circa 1952 and photographed from the northern end of the goods yard, this is a delightful study of a Dean Goods gaining speed as it heads for East Garston. Just to the right of the picture, the aforementioned crane and beyond the goods wagons, two height gauges. 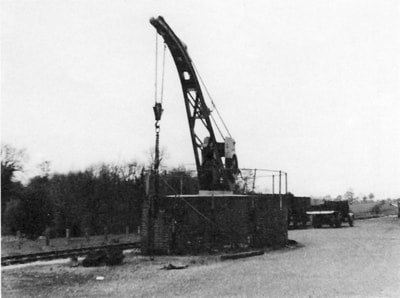 In 1923, to facilitate the handling of larger, heavier loads, a 64-ton capacity crane was installed in the station yard at a cost of £179. It was mainly used for dealing with timber. Travis & Arnold were handling supplies here arround that period. The lorry parked behind the crane belonged to Mr. Bates, a local carrier.

The office accommodation was in line with the other intermediate stations, and could, at best, be described as adequate. A bench seat ran along the back wall of the building with a counter and fixed shelf at one end. A ticket rack was mounted on the wall over a second bench at the other end. A desk, a cupboard and a tortoise stove were provided along with a wall-mounted lamp.

Milk churns can be seen on the platform awaiting collection for onward transmission. From the late 1920s, some 20 of these churns were being loaded daily for the outward journey. Sundays were no exception with farmers stacking their own churns on the platform to await collection.

In the early 1940s, a passing engine set alight the thatched roof that is just visible to the rear the pagoda shelter, resulting in its complete replacement. 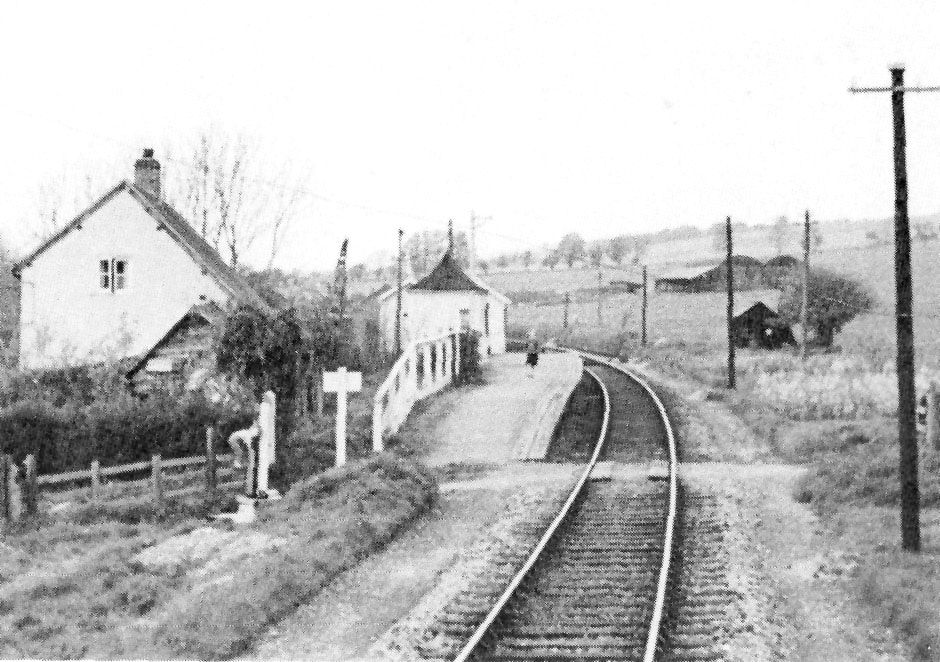 Approaching Great Shefford Station from the Newbury direction. The crossing in the foreground doubled as a foot crossing and an access track for a local farm. 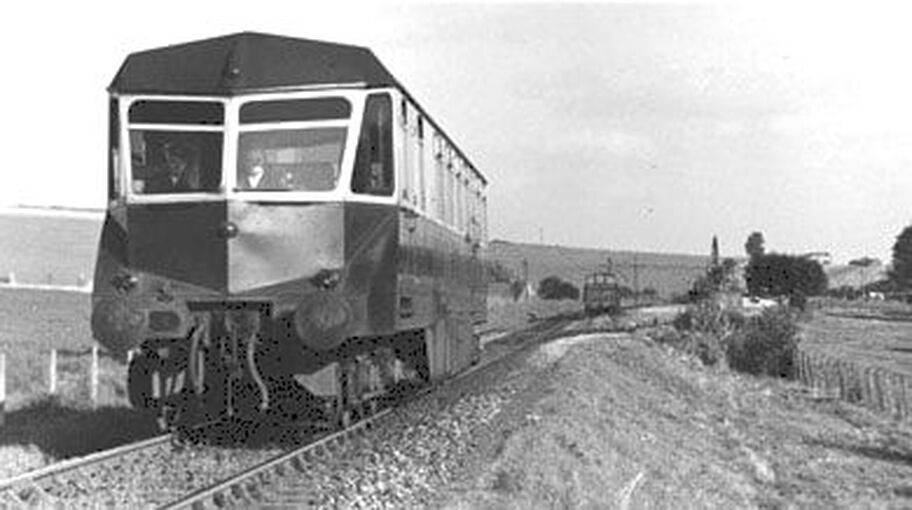 Seen here leaving Great Shefford, bound for Lambourn, the diesel railcar was a common sight on the branch from 1937. This one is of a later batch of cars built at Swindon from 1938 onwards, on a chassis assembled by AEC at Southall. 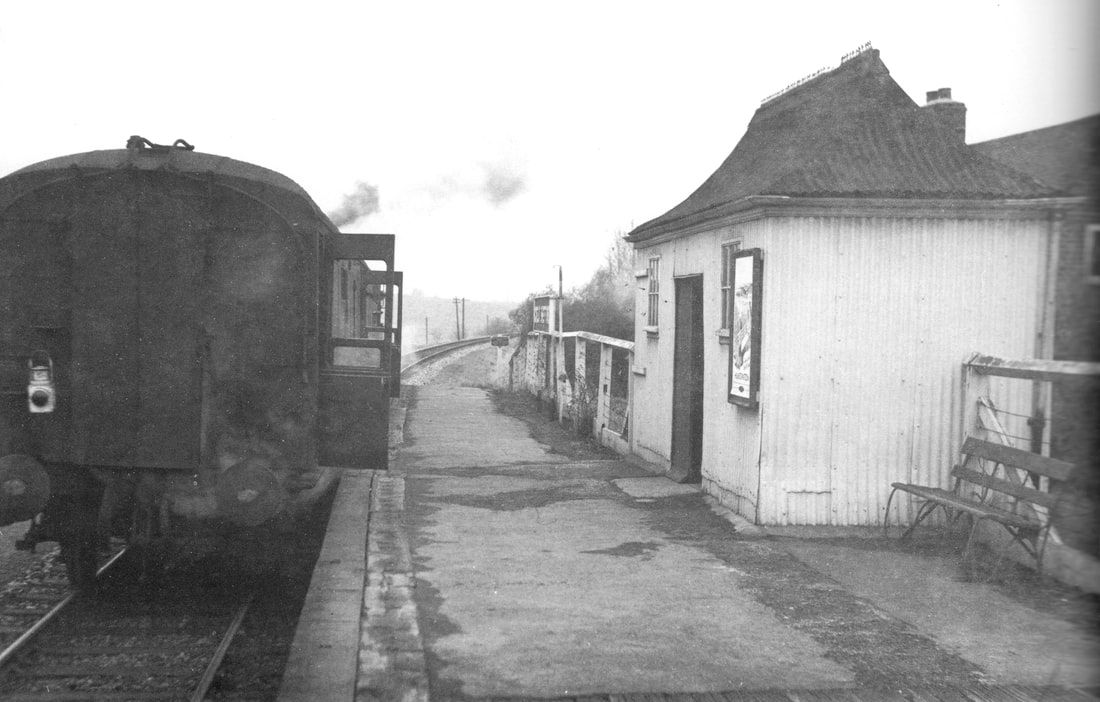 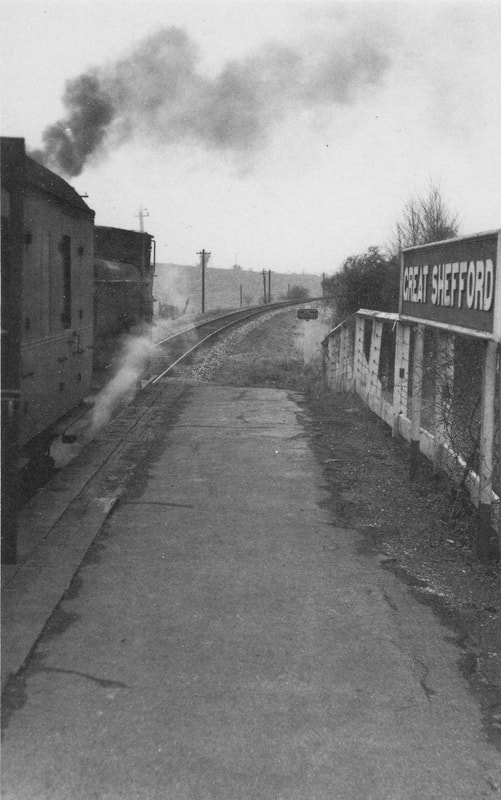 Close-up of the nameboard and wooden fencing with wire strands. Photo: Chris Gammell

On a personal note

The black, Nissen-type building behind the loading gauge was rented from a local farmer by my Dad and used for the purpose of growing his own mushrooms. Yard maintenance was not at a premium in 1952, as can clearly be seen in the foreground.

Great Shefford is the one station on the old line that holds special memories for me personally. I grew up here and as a consequence used the rail facilities quite regularly, in fact, right up until the the blight of closure was inflicted on us by the short-sighted government of the day. The station itself was situated in the village just north of centre. Formally called 'West Shefford', it underwent a name change in November 1900.

A local man, Arthur Smith, was porter at Great Shefford for as long as I can remember. He was an extremely kind and patient man who always had time for people, regardless of their age or background. The trains were a draw to most of us village children, and Arthur would always allow us to watch the comings and goings from an area he defined as safe. Two other long serving members of staff here were Reg Hatter and Sid Alexander. Bert Nimms was also a well known, much respected member of the railway staff.