The line from the south, after passing West Fields, made its way through Speen Cutting, a description of which can be found on the page for West Fields.

The original station at Speen consisted of a nine-inch high platform fenced with chestnut palings, a small office, three oil lamps and a station nameboard. The platform was ultimately raised to standard height with the addition of two 25-foot ramps. The traditional Great Western, corrugated iron pagoda shelter was added around 1910.

Initially, the station was known as 'Speen for Donnington' and, as late as 1932, was so listed in some timetables. A lad porter was in sole charge until February 1908.

The increase in traffic, coupled with the added responsibilities for the operation of the crossing gates, prompted the GWR to upgrade this position to that of a Class 1 Porter. Duty times for the porter would be 7am to 8pm. At all other times, including Sundays, the train crews were responsible for the safe operation of the crossing gates. The Speen porter was also required to light the station lamps at West Fields and Stockcross.

This 1919 view looking towards Lambourn shows the station as it would have appeared after its GWR restructure. The office and lamps from the original station are still in situ. However a new GWR-style nameboard was now in evidence sitting proudly on the newly raised platform, the length of which had been increased by 49 feet. The seat by the booking office appears in no other photograph. 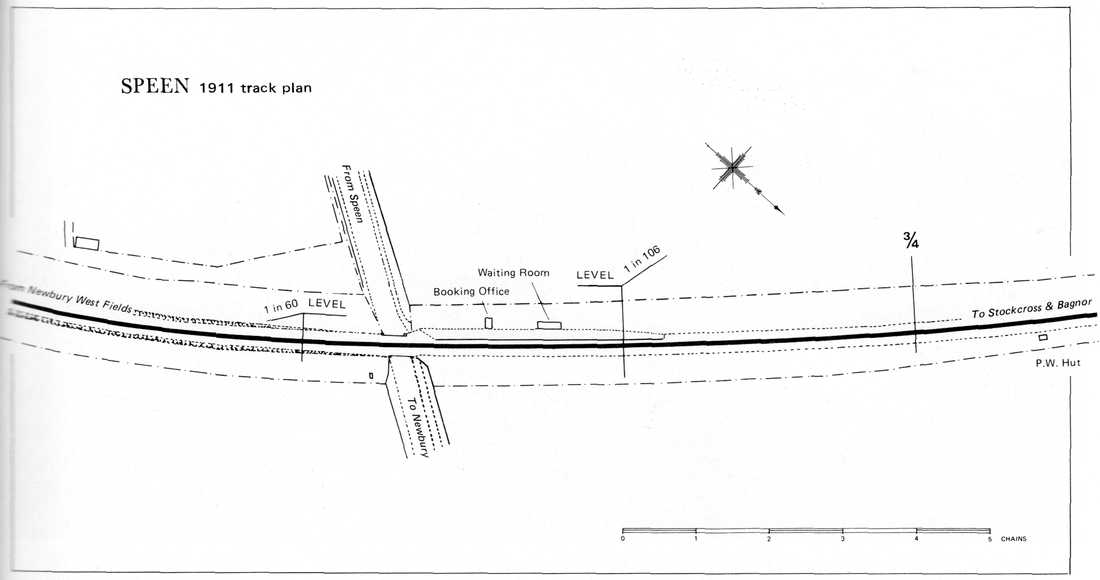 The track plan couldn't be any simpler, although Speen did boast one of the line's three level crossings. The road is still named Station Road.
Speen's level crossing was protected by fixed distants, that for the up direction being situated at 540 yeards, with the down distant at 500 yards. In the late 1950s, a BR work study revealed that 375 road vehicles, including cycles, used the crossing during an average day, and that the average delay at the crossing was 1-3 minutes during station opening hours. 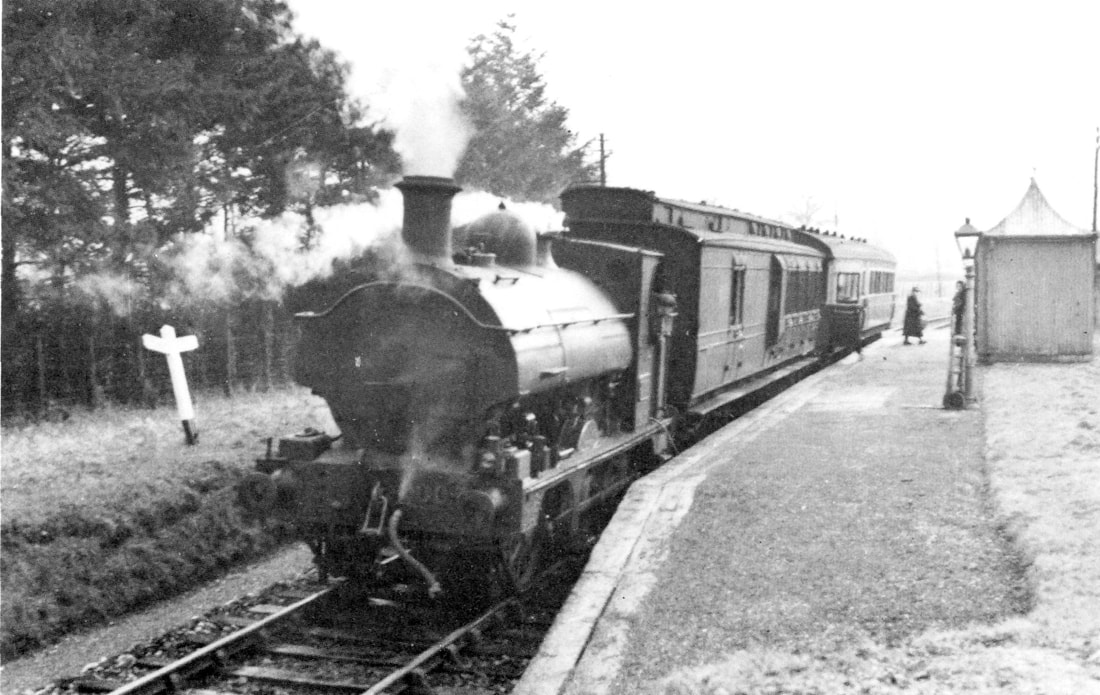 Saddle tank engine 2007 at Speen heads a Lambourn train in January 1936. The clerestory brake coach behind the engine was one of two used at the time to supplement the daily service as and when required. Photo: Dr. I. C. Allan
Speen's traditional oil lamps were replaced with Tilley lamps, as happened at some of the other stations. The small cupboard on the side of the wooden office housed the batteries for the telephone communications which had been installed in 1905 between Welford Park and Newbury. This now meant of course, that the porter at Speen could be advised in advance of all departures from those stations for opening the gates. Fixed distant signals protecting the crossing were situated 540 yards south, on the Newbury side, and 500 yards north, on the Lambourn side. 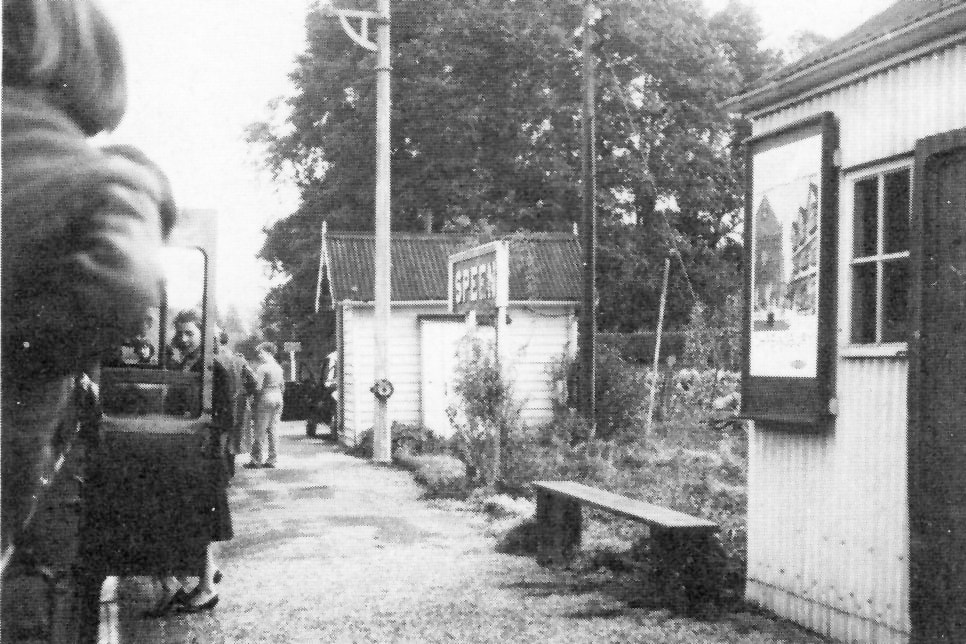 A busy day on Speen station and the number of passengers in evidence would suggest that this photo was probably taken on a Thursday, this being Newbury's market day in the 1930s.
The line ran through a prime agricultural area, a high percentage of which was used for livestock farming, so it's no surprise that the surrounding farms provided a quite sizable volume of milk traffic. This situation continued until the general decline of milk carriage by rail.

A considerable number of parcels were also dealt with. Some of the smaller items would be delivered by the porter, Larger, heavier parcels would be dealt with by the Newbury-based road vehicle or by a local carrier. Race horse transportation was virtually non-existent at Speen.
The summer of 1951 (above), and a typically average day sees a solitary passenger boarding the train to Lambourn. Most people now used the local bus company to travel up and down the valley. The Speen porter was usually kept fairly busy, for in addition to his parcel deliveries the station had to be kept clean and tidy, as did West Fields and Stockcross, all three being his responsibility. Note the re-purposed slip coach in the right-most image above. 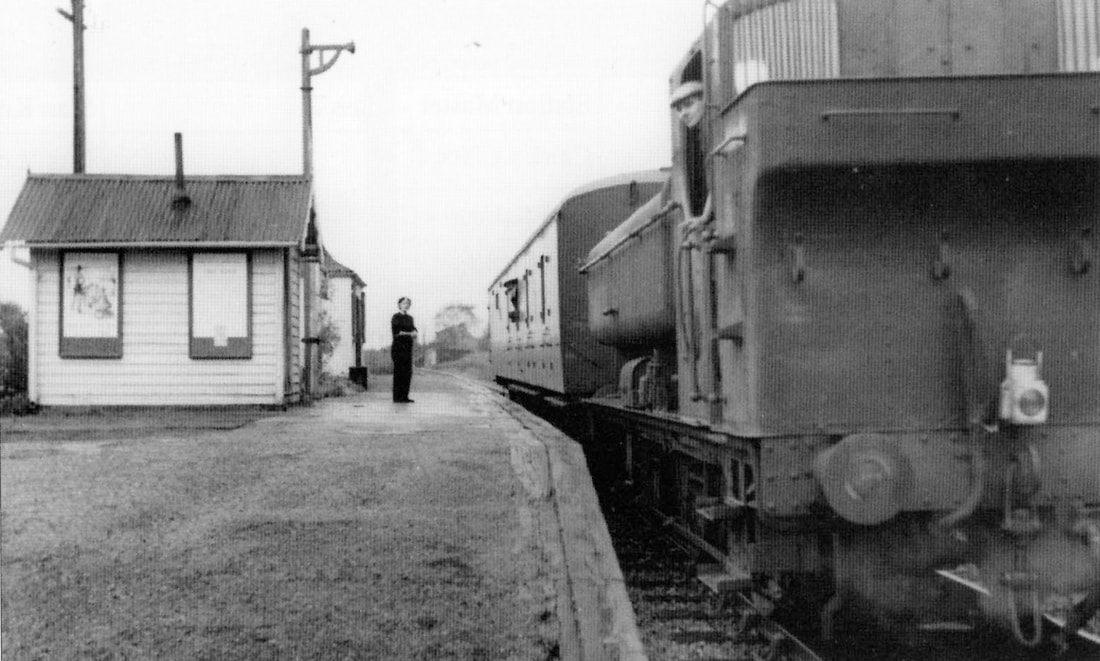 Edith McCartney watches the departure of an engine and single coach destined for West Fields and Newbury. Edith worked at Boxford until the station was reduced in status in 1954. It was then that she took over duties at Speen, and remained here until the line closed. 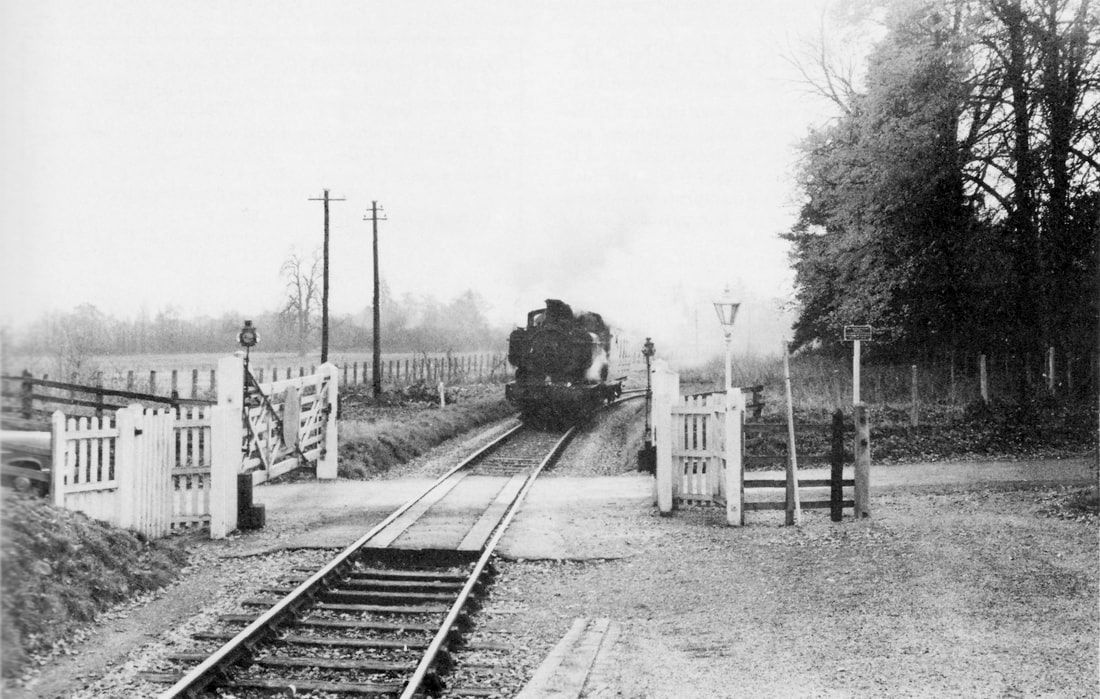 The train emerged from the cutting passing the village of Speen and coasted gently toward one of the line's three level crossings. Each gate carried lamps fitted with both red and clear glass. The lamps rotated as the gates were opened and closed, providing a visual warning to road users of the impending hazard ahead. Image taken on 21st November 1959. Photo: R. Denison 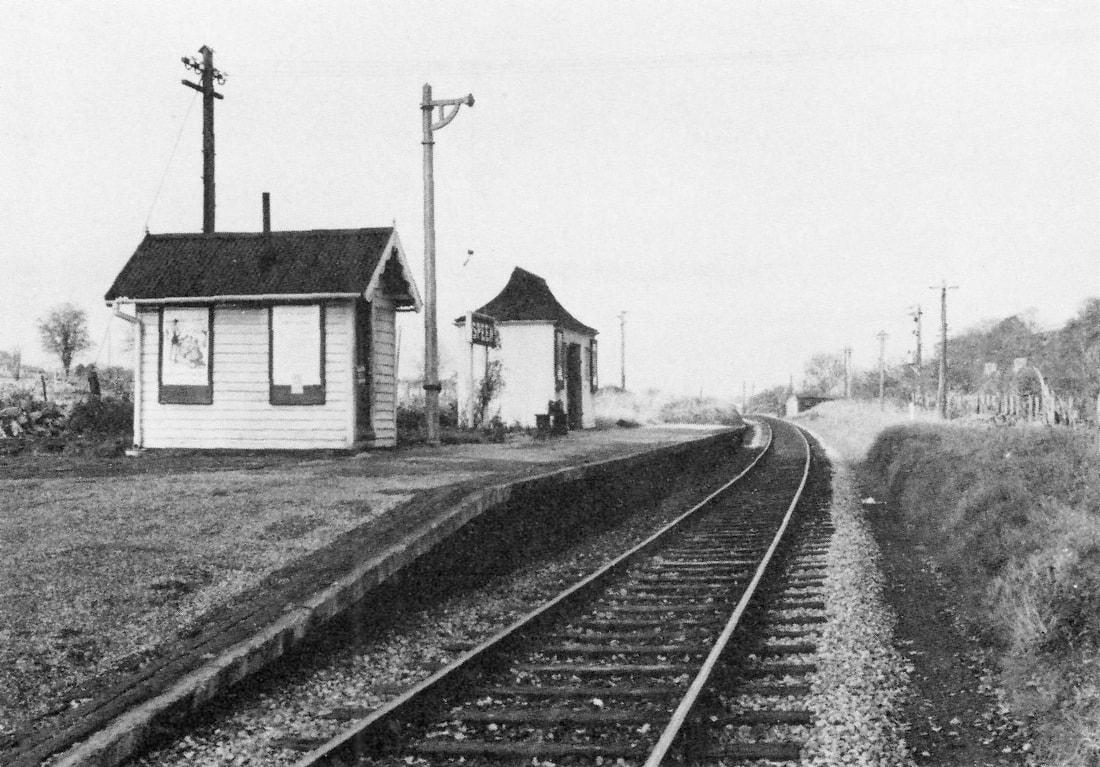 The waiting shed was a standard GWR structure, clad with corrugated iron. The wooden building to its left was originally provided by the LVR and had the luxury of a fitted stove. With the exception of Westfields, the platforms of all the intermediate stations on the line were located on the western side of the metals. This image was taken in 1959. Photo: R. Denison 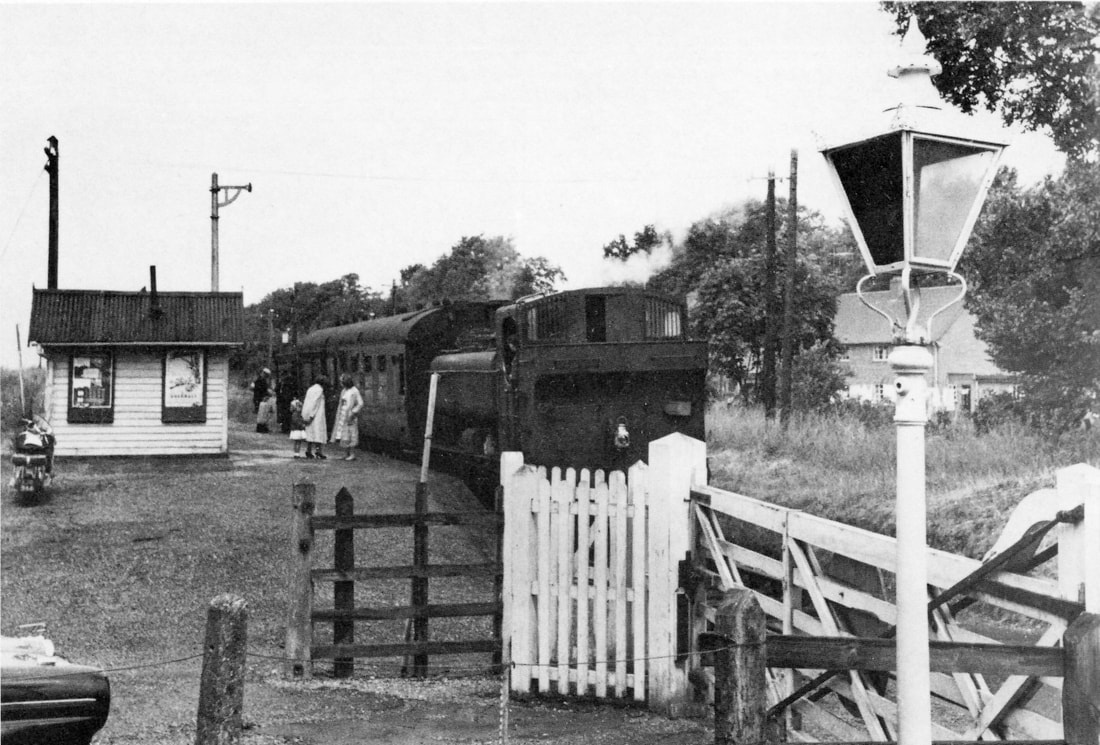 Judging by the paint on and lack of seat next to the wooden ex-LVR building, and the nose of the Austin car just visible bottom left, this image was taken in the 1950s 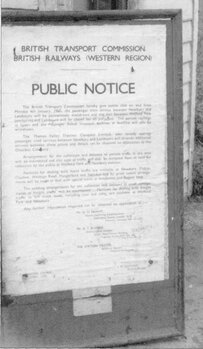 The public notice, dated late December 1959, advising of the withdrawal of services on and from Monday 4th January 1960

Long periods of inactivity on the line by the late 1960s would often draw a group of interested parties lineside. This BR diesel-hydraulic type D63xx (above) heads slowly towards Welford with its military payload. Infrequent military traffic to Welford Air Base kept the level crossing in operation until 1973. 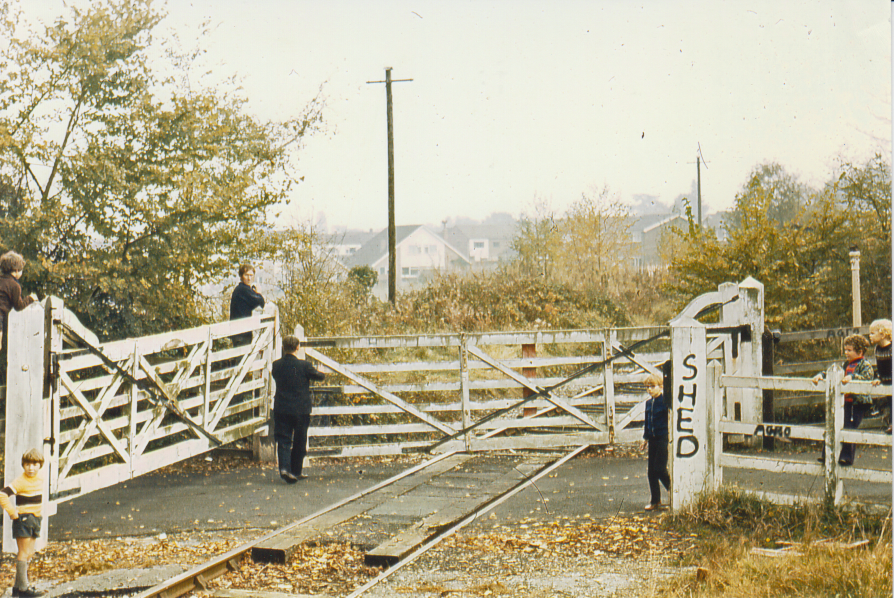 A late study of the level crossing at Speen. Judging by the clothes and the state of the gates, this image is likely to have been captured just before complete closure in 1973. And interestingly, you may find copies of this image on a variety of websites, and on most, close examination will reveal that the graffiti on the right-hand gate post and fence has been digitally erased. Photo: David Canning 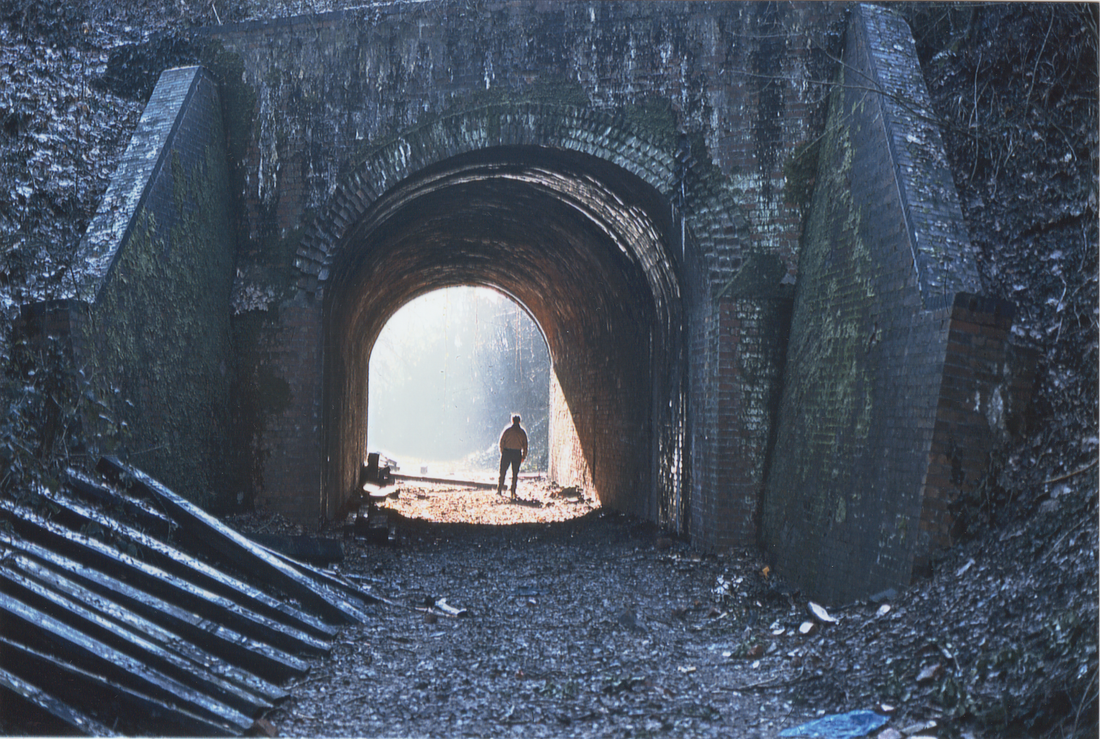