Above: 57xx Pannier Tank no. 4670 en route to Lambourn. Note the auto-coach, although auto-working was never used on the line. Photo: Lens of Sutton

Newbury West Fields (to give it its full title) was part of an expansion programme which saw many similar types of halt being erected on other areas of the Great Western Railway, all with the intention of increasing patronage by means of the new railmotors. The report from the Board of Trade inspection at the opening of the halt describes it as: equipped with lamps, nameboard and shelter, sanctioned for use for rail motor traffic. 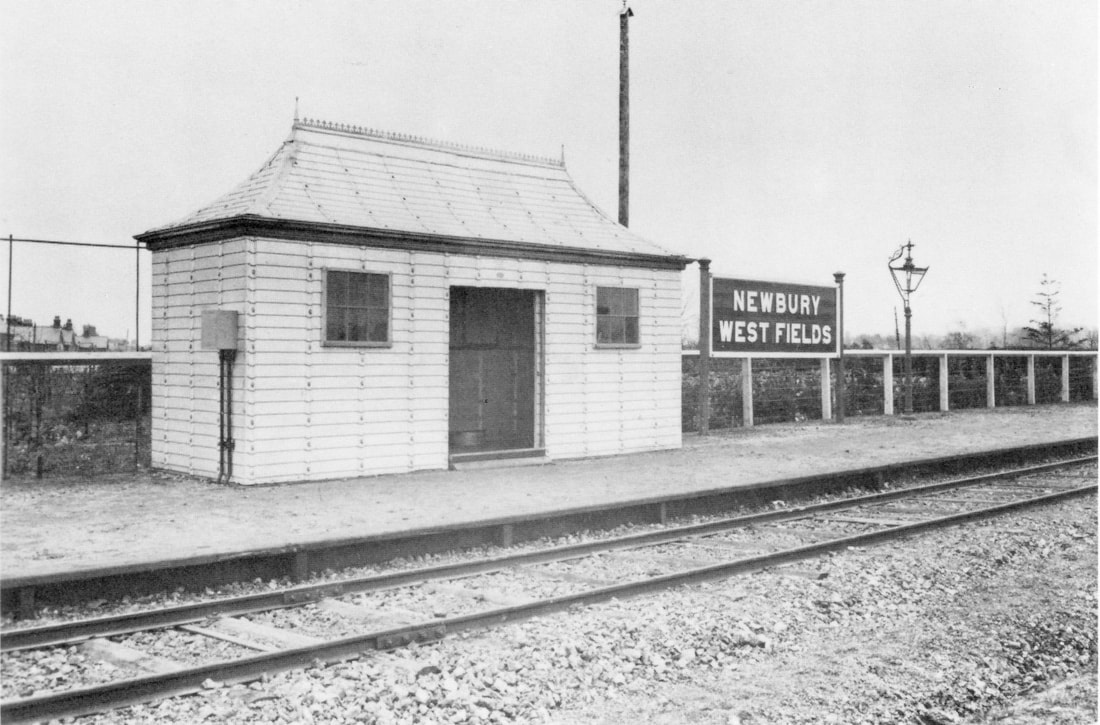 The station soon after opening. Note the LVR building and the nine-inch high platform, which woud be replaced in due course by the GWR with a full-height version. As you can see from the image at the head of this page, the GWR didn't have to do anything to the building to make it look like a GWR design.
West Fields was in keeping with many of the other stations, and consisted of a solitary platform situated on the eastern side of the line. Shelter was provided by the GWR's traditional pagoda-style hut. Supplied by S. Taylor & Co. of Birmingham, this building differed from the others as it was built of concrete instead of the usual iron construction. It was described as being built from Taylor's patent universal roof covering and building material. 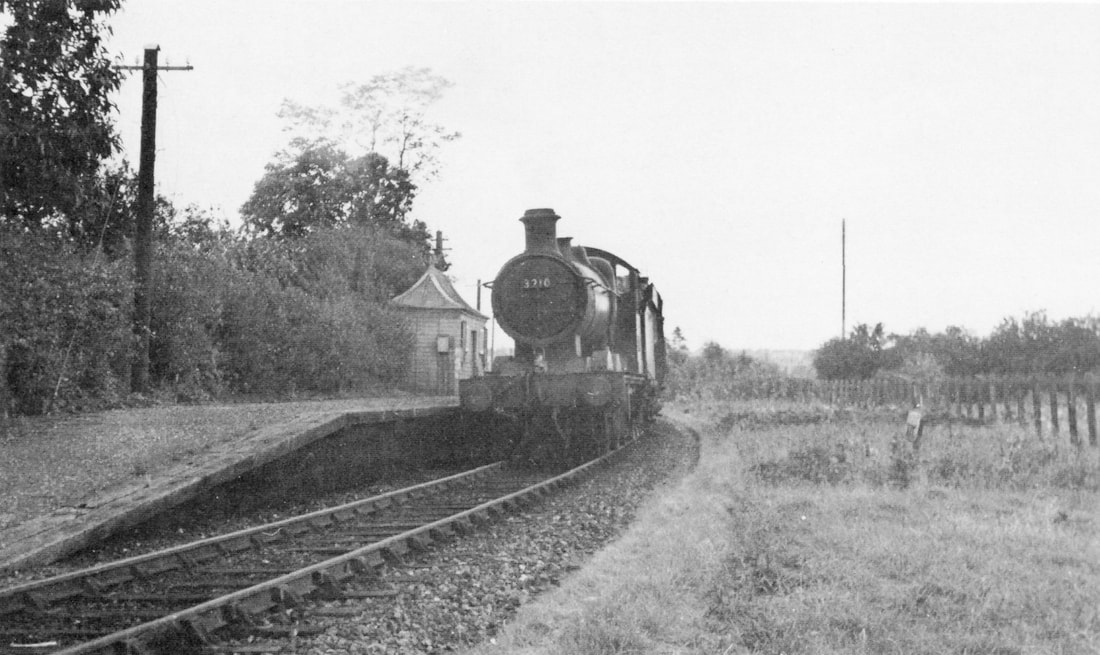 0-6-0 Collett class 2251 no. 3210 pauses at West Fields hauling a down passenger train. Photo: D. W. Winkworth
Access to the platform could be gained from either end, via a pathway leading from the ramp at the Lambourn end to a small gate, opening onto Gloucester Road (now Clifton Road). A standard GWR trespass notice was also erected by this gate.

At the Newbury end, a similar path led to a larger gate opening onto Craven Road. There was also a crossing point, which allowed tenants access to several garden allotments which were situated directly opposite the platform. Lighting of the standard-height platform was achieved by the use of gas lamps, the only ones on the line. These were fed from a supply pipe running through a meter on the far side of the shelter. 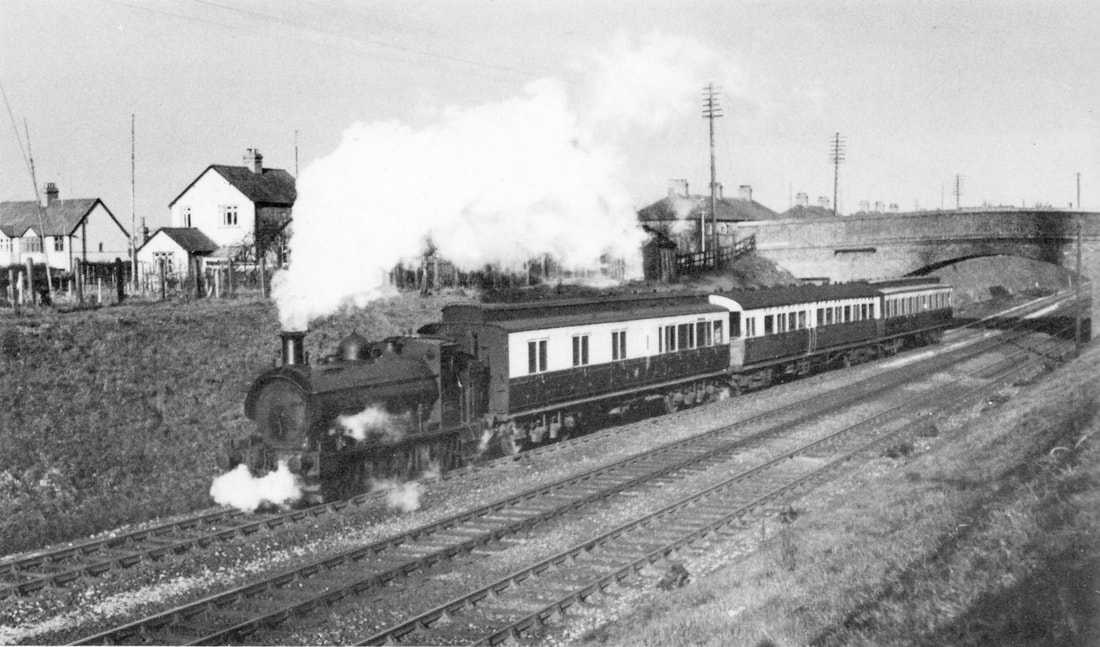 The stalwart 2007 saddle tank hauls a three-coach Lambourn train up the bank away from Newbury, next stop West Fields. Image taken in 1936 by J. G. Dewing 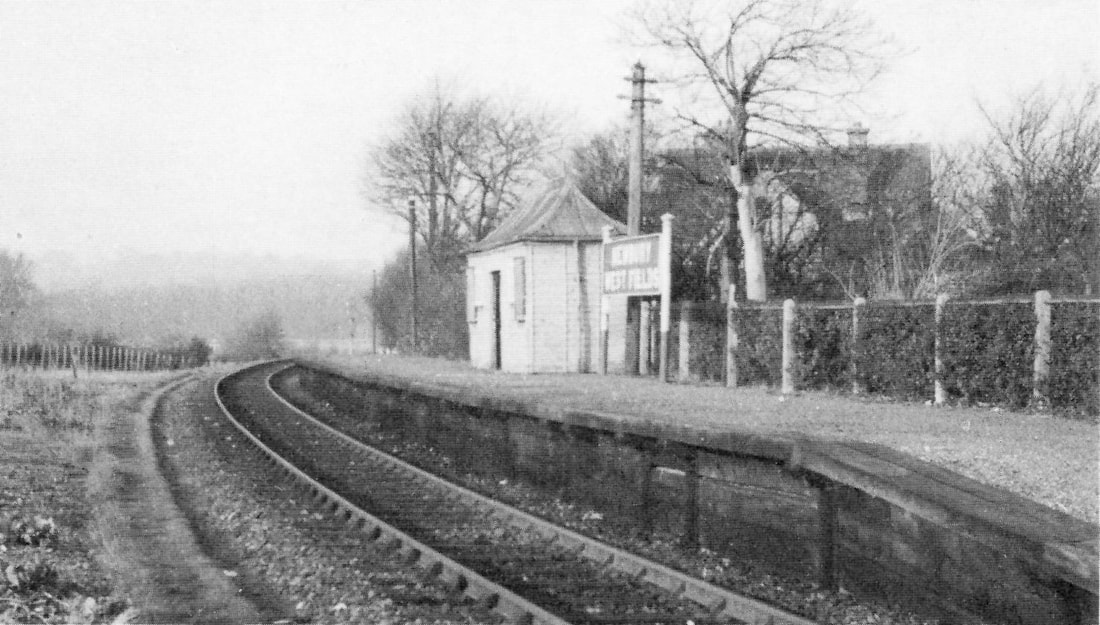 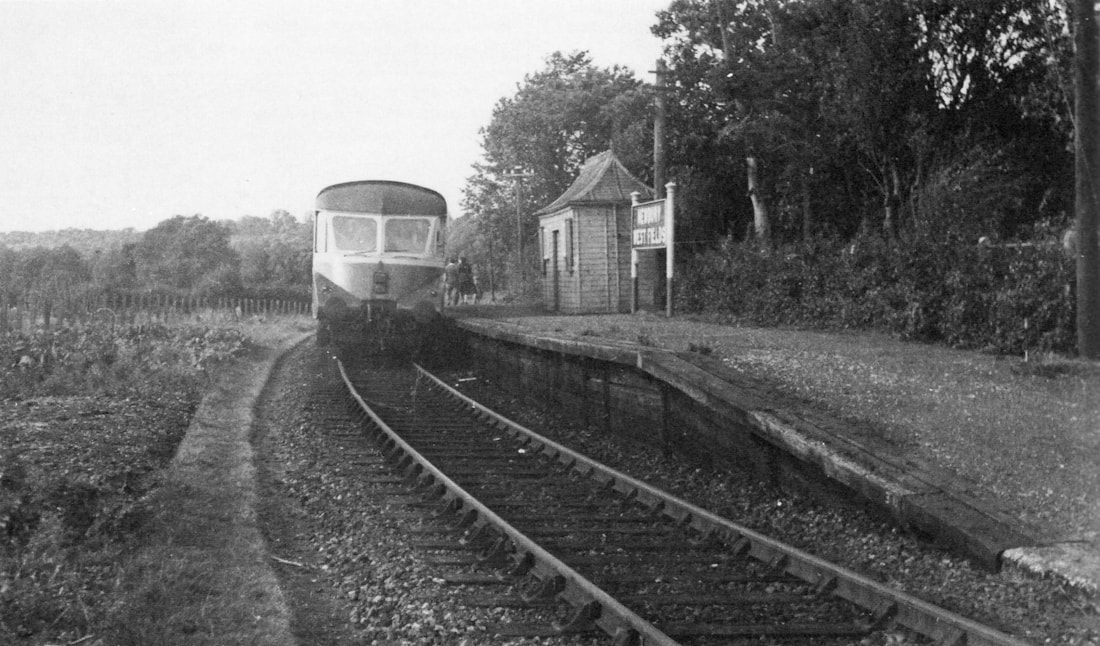 The halt in the 1950s, as a diesel railcar takes on a couple of passengers. When the GWR built up the platform here to standard height, it used sleepers topped with a cinder surface. Photo: D. W. Winkworth
A work study carried out at the station for the week ending 11th October 1952 revealed that just 33 passengers had used the halt that week, 16 boarding the train and 17 leaving it. Looking at it logically, it would be fairly safe to assume these were the same people going to work in the morning and returning home in the evening.

Total receipts from West Fields for the whole of 1952 amounted to £17. 5s. 7d (approx £17.28). The halt's estimated maintenance costs during a 12 month period was £30 so, in a effort to save revenue, it was suggested the station be kept open but given no maintenance until the shelter became due for renewal. At this point in time, the shelter was considered to have a further five years of life. Consequently, in February 1957, the halt was finally closed and, by June of that year, both nameboard and shelter had been removed.

A short distance north of West Fields, the line straightened out onto an embankment after traversing a fairly substantial, elongated girder bridge spanning the River Kennet, its tributaries, and the Kennet & Avon Canal.

The Newbury firm of Plenty & Co. supplied the ironwork, with all other bridging work carried out by Finch & Co. of Chepstow. 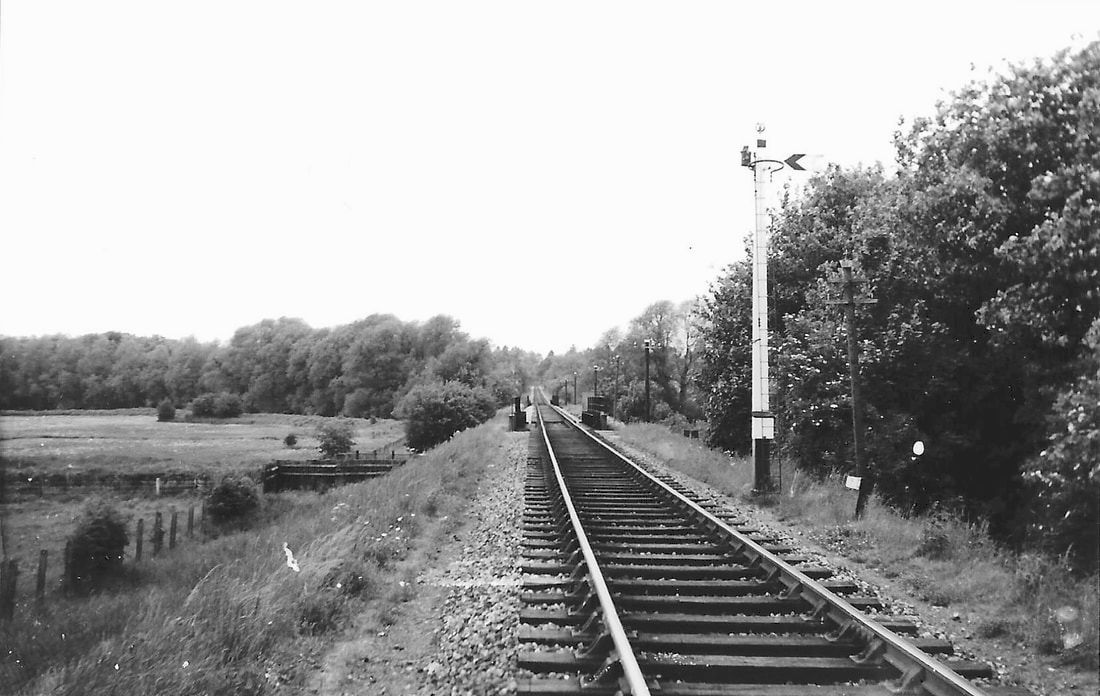 The embankment between Westfields and Speen. This view, taken in June 1957, looks back over the Kennet bridge towards Newbury. It was near this point that an unfortunate fatal accident occurred during the first week of the line opening, when two young boys were struck by a passing train and subsequently died in hospital.
The cutting was the site of two brick arches, or tunnel bridges, one carrying the Newbury-Speen road, and the other, the main A4 to the west. Even as early as 1898, there was serious concern regarding earth slips and drainage problems with the cutting sides. Soakaways were constructed to provide channels to carry rainwater down to the cess at track level. Much of the ballast used was extracted from a working at the nearby station of Boxford.

From here the line skirted Benham Park, offering the traveller glorious views from the carriage window. These views were short-lived as the line then entered Speen cutting, which became notorious for land slips over the years. It was a deep dark cutting made even gloomier by the tall conifer trees high above.

This cutting was the site for a tragedy. On Good Friday, 8th April 1898, two boys playing on the line lost their lives. The train from Speen had just passed under the road bridge and, because the cutting had been there, unused before the line formally opened and trains started to run, many local children had taken to using it as a playground. Despite the driver sounding his horn and braking, he was unable to avoid them. The coroner ruled that the deaths were accidental and that the safety procedures on the LVR were adequate, but did apparently say that enforcement could have been better. 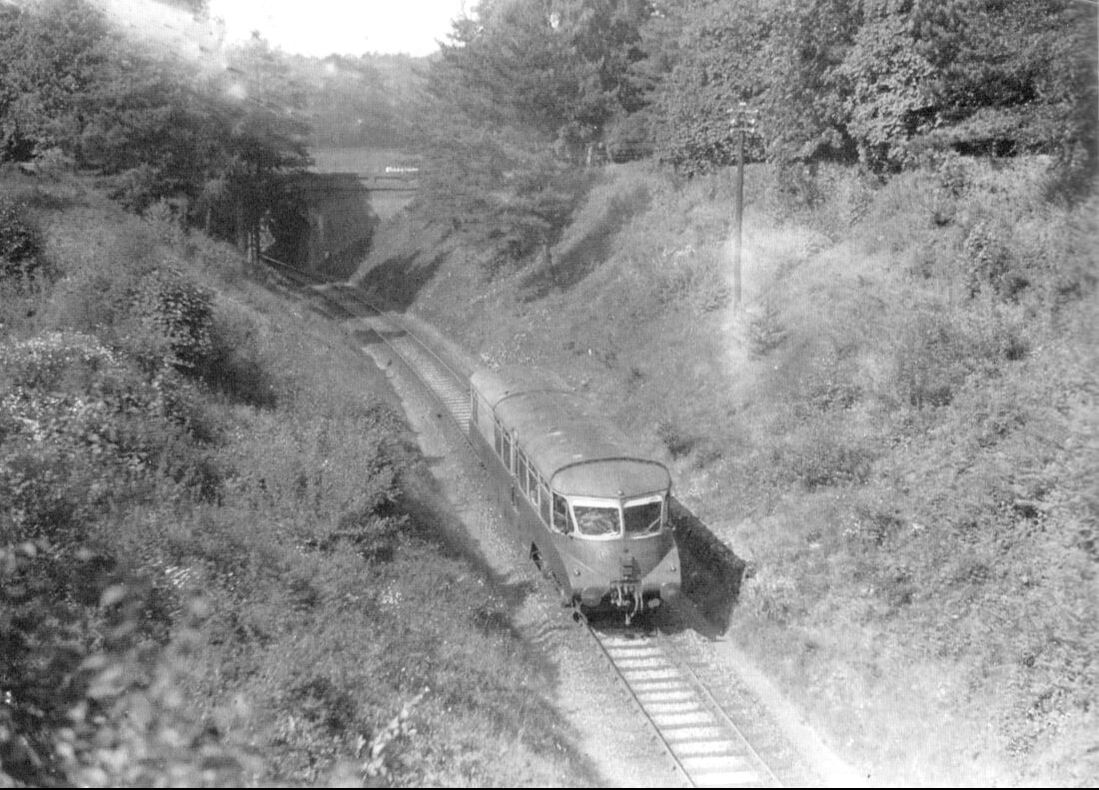 A bright sunny day as Railcar No, 18 trundles through the cutting on its way to Lambourn. 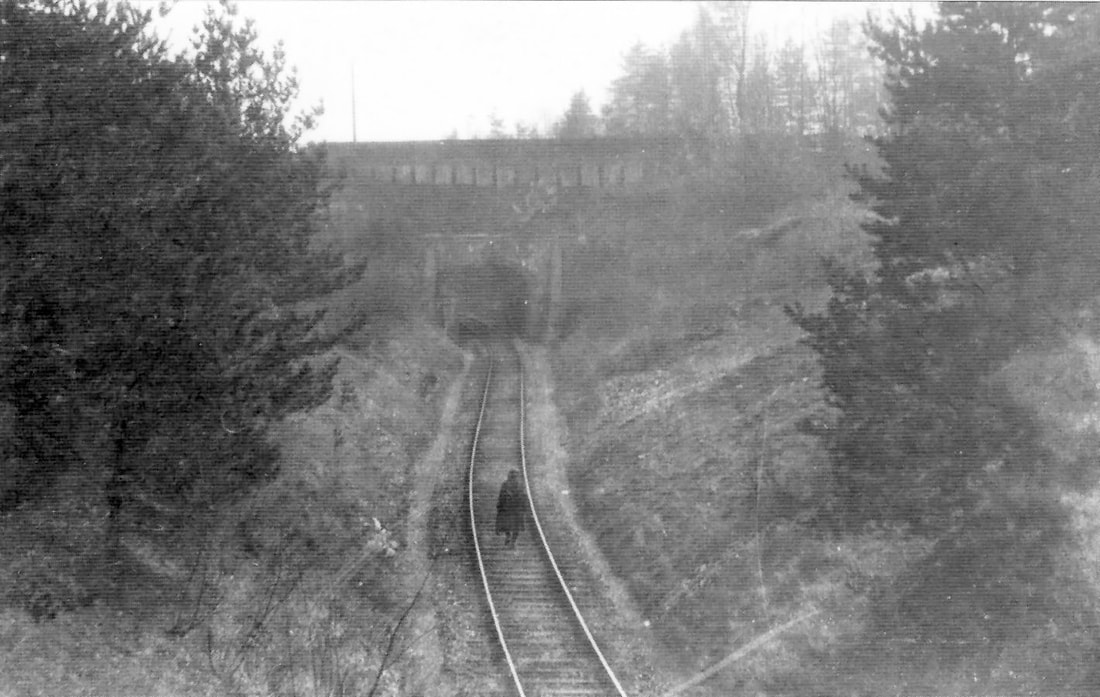 The bridge in the background carries the A4 Bath Road as a lonely figure walks the line towards Newbury. Ganger or trespasser? We simply don't know. Photo courtesy C. Marshall