The Great Western takes over

On 19th July 1905, the Lambourn Valley Railway ceased to exist, acquired by the mighty Great Western Railway. From then onwards, although it retained much of its character, it would - pretty much - be just another GWR branch line.

The GWR wasted little time in making its presence felt. Overall, the new owner spent £7,721 on improvement works, much of it on platforms, both raising them to a standard height, and lengthening them. Sidings were lengthened too and alignments adjusted accordingly. The bulk of the money - £5,579 – was spent at Lambourn station, with the rest distributed to Great Shefford (£2,316), Welford Park (£1,382), and Boxford (£431).

In addition to these large-scale improvements, the GWR also carried out a general upgrading of facilities, including the fitting of new station lamp posts and and name boards. A two-way telephone system was installed, linking all staff-attended stations with Newbury. During 1908, the GWR decided that facilities at Lambourn fell short of its requirements, so it decided to completely reconstruct the terminus, keeping only the goods and locomotive sheds. At Great Shefford, a horse loading platform and extended sidings were the order of the day.

Welford Park became a crossing place with a signal box an additional platform, and a passing loop. Boxford gained an extension to its loop siding. The line was equipped with a signalling system for the first time, and in June 1908 the electric tablet method of single-line operation was introduced. For this purpose, the line was divided into two segments: Newbury to Welford Park, and Welford Park to Lambourn.

The Board of Trade inspection of the completed works in 1910 reaffirmed both the 25mph speed limit introduced originally back in 1898, and the 8-ton axle weight. This is somewhat surprising as the Board had cleared the line for the use of 12-ton axle loading railcars in 1904. Equally surprising was the fact that the GWR didn't strengthen the underbridges during the revamp of the line, which would have facilitated increases in both speed and weight restriction.

In 1912, the GWR Board approved the introduction of a new Sunday service, consisting of two passenger runs each way and hauled by a Lambourn-based locomotive. The service became effective on 5th May that year and coincided with the new summer timetable, but was discontinued in October 1914, along with other service reductions made during the first world war. 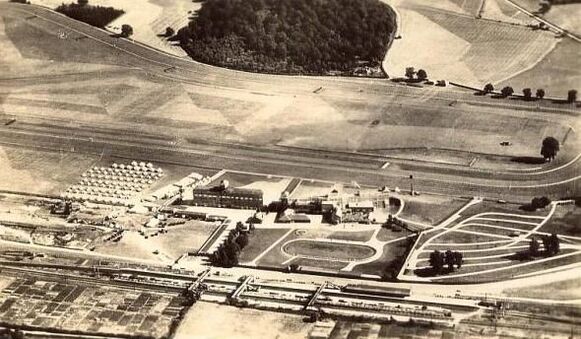 Newbury racecourse c. 1920
Newbury racecourse had opened in 1905, and the area was a well-established centre for training and stud purposes and for bloodstock sales. This brought a large volume of traffic to the line, in most cases special trains. The horse boxes were fitted with dual-brake systems for operating into territory where the Westinghouse air brake was operating.

So in spite of world events and all the associated hardships of the war years,post-war traffic on the line increased significantly and by 1923 receipts were practically double those of 1913. In November 1924, the GWR Board decided to re-introduce a Sunday train service, primarily for the collection and conveyance of milk from the farms along the valley. It would start from Didcot, using a Didcot-based locomotive and crew, the idea being that it would also provide for collections on the Didcot, Newbury and Southampton line. The new service became operational in January 1925.

Road transport was by this time starting to affect the railway companies quite noticeably and in an effort to compete with the private transport operators, the GWR acquired a large fleet of its own road vehicles. Great Western's very first local bus service was inaugurated on 17th August 1925 and ran from Swindon to Lambourn, travelling via Stratton Park, Wanborough and Aldbourne. A second Swindon service was introduced on 26th July 1926, passing through Ashbury, Wanborough and Coate.
This particular route lasted just three years, and was withdrawn on the 6th July 1929. The GWR started a bus route from Newbury to Lambourn on 27th May 1926, running on Saturdays and Sundays only. This venture proved to be unprofitable and in line with Great Western's unparalleled efficiency, it was withdrawn by the end of the year.

GWR's bus services had been run in an effort to discourage small private operators but the plan was unsuccessful. Midland Red, Bristol Tramways, The Newbury and District Bus Company and The Thames Valley Traction Co. were all up for a bite of the cherry. In 1932, Great Western ceased bus operations altogether.

Back to the railway and the year is 1926, the year of the General Strike. The Great Western was badly affected, as indeed were all companies. Even the tiny Lambourn branch line didn't escape, with only one erratically operated train per day, watched over by a skeleton staff. However, the strike lasted only nine days.

The winter of 1926/27 brought with it heavy snowfalls, causing further chaos to services. A snowplough was transhipped from Reading to work on both the D.N. & S. and the LVR lines. Unfortunately the plough itself became a victim of the weather and ended up firmly stuck at Eastbury for several hours resulting in the complete cancellation of all train services on the LVR.

Despite these unavoidable setbacks, the years from the early 1920s to the early 1930s were to be the most profitable and successful period the line would enjoy. During this period both passenger and goods traffic were at a premium. The GWR altered the timetable of the LVR line to improve connections with mainline trains at Newbury. Some trains even escaped from the branch and ran on to other destinations beyond Newbury, with Oxford and Didcot among the more popular destinations. 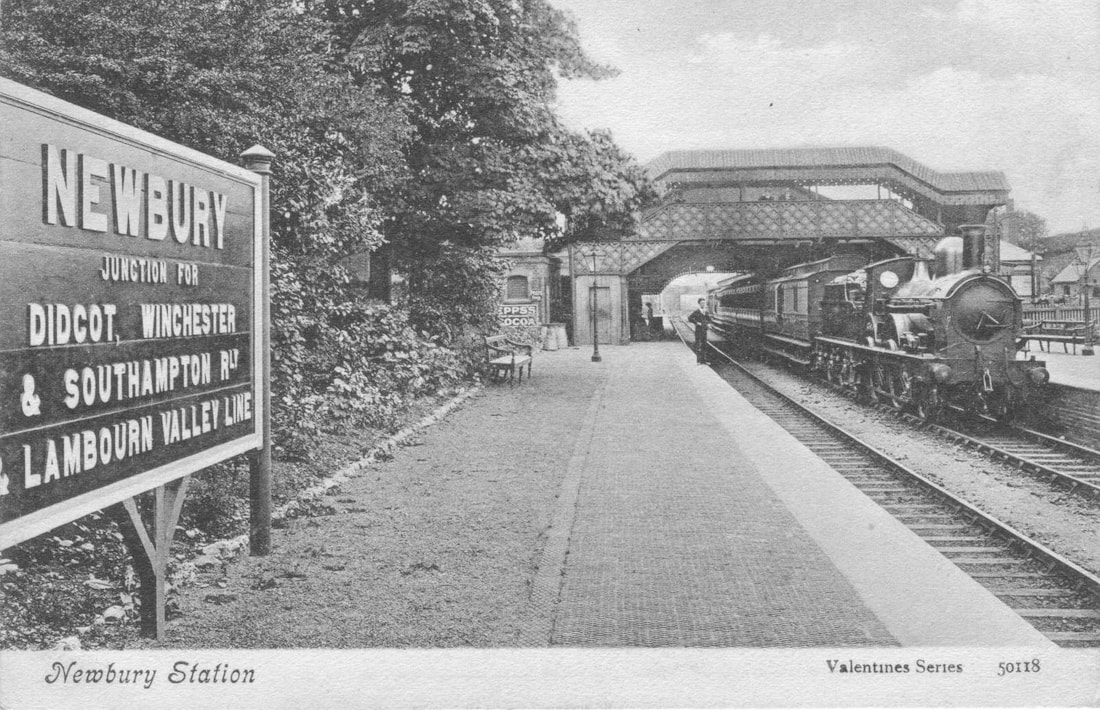 Trains from Lambourn went not just to Newbury but beyond! Image courtesy of Wikipedia
The transportation of horses reached its peak in 1927/28 with special trains running to race meetings all over the country, in addition to the local traffic already created by the opening of Newbury Racecourse in back in 1905. A number of trainers owned private boxes leased on a permanent basis, but overall responsibility for ensuring that enough horse boxes were available was that of the Clerk at Lambourn. It must have been a job that required a degree of clairvoyancy, as most trainers would delay giving the station notice of their box requirements until the very last minute. 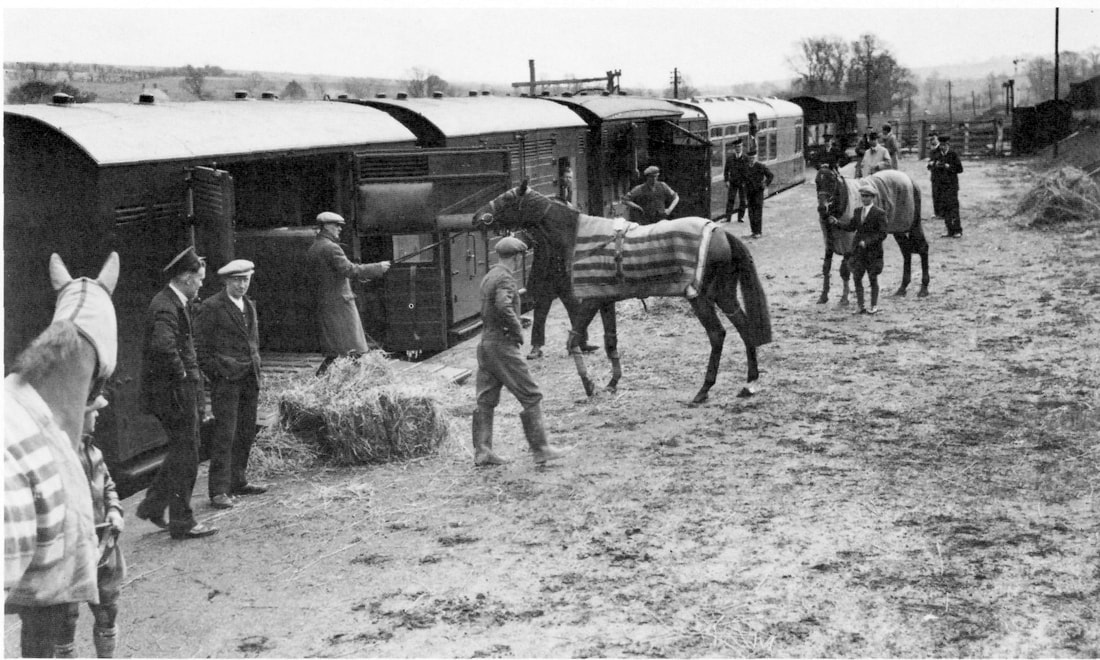 A lovely detailed view of the horse dock and a racehorse train, hauled by Railcar No.18 (as seen on the Motive Power page) from the 1930s.
Race specials achieved their peak during the years 1920 to 1935 when up to 35 horseboxes in a single day would be hauled into and out of Lambourn Station. 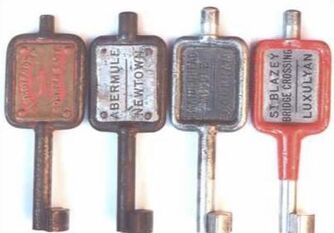 Examples of GWR electric key tokens. See http://www.trainweb.org/rcn_uk/slt.html for more info
In March 1929, the ATC ramps were removed and replaced by fixed distant semaphores. In July of that year,the electric train tablet instruments were replaced by electric token, affecting the signal boxes at Lambourn, Welford Park and Newbury West.

Mid-July 1932 saw the introduction of a late evening passenger service running on Saturdays only. The train left Newbury at 10.15pm and arrived in Lambourn at 11.00pm. This particular service was very well patronised in so much as it provided transport home for people from along the Lambourn Valley, after spending an enjoyable evening in town. The service was one-way only and the train would run back empty from Lambourn arriving in Newbury at 11.45pm. 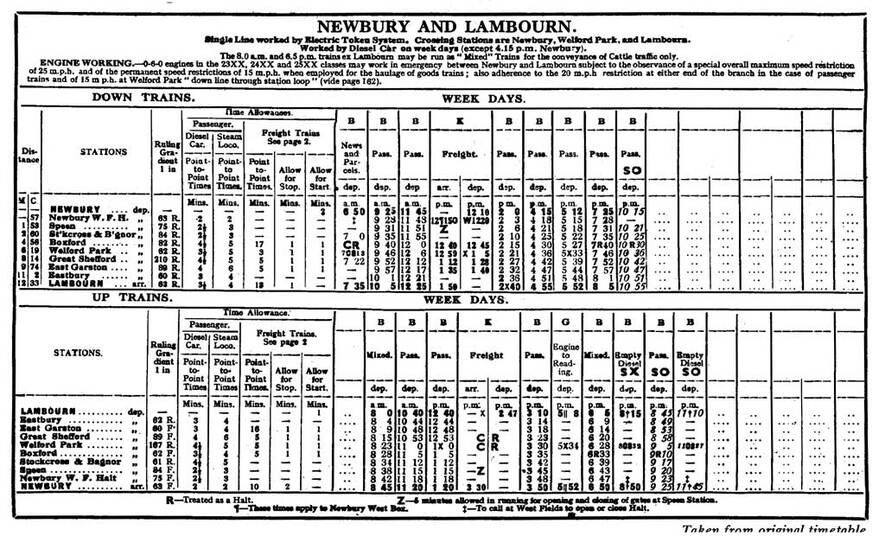 A working timetable from 1933. Passengers benefited from six weekday passenger services a day, and one on Sundays. The weekday schedule allocated time around midday for goods to be picked up and dropped off. 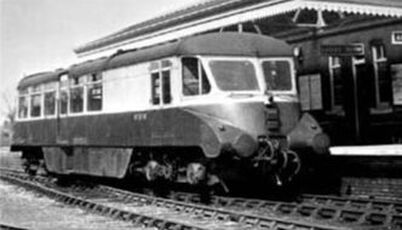 The financial decline of the Lambourn line started in 1934, a continuing situation that forced the GWR to look for operational economies. The halts at West Fields, Stockcross & Bagnor and Eastbury were left unstaffed and, two years later, the GWR decided to deploy diesel railcars on the line in preference to steam-hauled trains. So 1937 saw the new Diesel Railcar, No. 18, enter service.

The introduction and subsequent use of the new diesel in service had a positive effect on the line by restoring a small profit.

However, a few unforseen operating problems were encountered. The driver needed to stand up to see the couplings when shunting, which made control of the foot throttle somewhat difficult. Another early problem was that the electric token carrier hoop had to be modified, as the original was too big to fit through the cab window.

The railcar was based in Reading and would travel down in the mornings, bringing with it newspapers for Newbury and Lambourn. After the day's operations it would run back light to Reading. This helped reduce costs, and enabled the closure of the Lambourn station engine shed in 1936. All future workings, including the daily goods train, would now operate out of Reading.

Although parcel traffic had increased, passenger numbers were adversely affected by the introduction of a Lambourn valley bus service. In 1938, The Thames Valley Traction Co. started bus operations between Lambourn and Newbury, running on Thursdays and Saturdays. Specifically tailored to coincide with Newbury market days, this new bus service was instrumental in attracting many regular passengers away from the railway, leaving it reliant on the other, less profitable days of the week. Shades of the Titfield Thunderbolt!

Being a terminal branch, the Lambourn line escaped the strains of heavy second world war through traffic, but the war did affect the line in other ways. For instance, unlike the 1914-18 war, many of the railway staff chose to join the armed forces, making day-to-day running of the line somewhat difficult.

The GWR overcame this problem by employing women to replace the Porters, Signalmen and Clerks that had taken this option. Military bases were set up in and around Lambourn in anticipation of the arrival of troops from various divisions and countries, including the Americans and Canadians. Special military trains operated from 1940, bringing in troops and armaments for the air base at Membury. As the war progressed, the irregularity of train movements up and down the line necessitated the line remaining open 24 hours a day. However, only signalmen were required to work out-of-normal hours, not a difficult task for them as very few trains ran along the line at night.

In the months following the end of the war, goods traffic on the line was at an all-time low. Race specials had dwindled to the point of extinction and any goods that were carried would be those required locally such as coal and agricultural goods.

Passenger numbers however, remained constant, possibly due to the issue of low-cost day return tickets and the fact that petrol rationing was still in force. In the run-up to nationalisation, the overall condition of the line and its associated stock, was good. Passenger patronage still held firm and train services were better than those of the independent LVR days.

And then, of course, on 1st January 1948 the GWR in turn ceased to exist, and became the Western Region of British Railways. The final chapter of our story beckons.
<< The Independent Years | The BR Years >>