The images above show East Garston Station just after the line opened, and with only the standard LVR wooden office in situ. As was the case at Boxford, the station here in East Garston was in very close proximity to the village, providing convenient and easy access via a narrow lane named, surprisingly enough, Station Road. All Saint's Church and the Manor House lie just to the north of the station area.

The distance between the rails and the northern boundary fence would suggest that perhaps a crossing loop had been initially planned by the LVR management as a later addition, or possibly it was - to borrow modern railway parlance - just passive provision. However this didn't materialise and the area was ultimately used for the construction of a loading dock as part of the GWR's reconstruction of the station in the early 1900s.

Reconstruction also brought with it a loop siding sited at the Newbury end of the platform, controlled by two lockable ground frames. It also resulted in a higher, longer, wider platform and the removal of the chestnut paling, which was replaced with the GWR's standard post-and-wire fencing. The station did however retain its two original oil lamps. Traffic access to the siding and goods yard was by way of a gated road running parallel with, and to the rear of the new platform.The now familiar pagoda-style waiting room was added later, and the reconstruction project undertaken by the GWR ended in July 1919.

Porter Tom Liddiard (above right) spent his entire working life at East Garston station. He started work here in 1913 and continued through until his retirement in 1957. Tom was an avid gardener and was in the enviable position of being able to combine his love for horticulture with his daily work. In fact, Tom's gardening skills on and around the station area won him several awards in the GWR and BR (Western Region) station competitions.

The small wooden office was a somewhat cramped affair, with a door at each end. The facing door in which Tom is standing, was boarded up in later years and a small ticket window installed. This increased the amount of staff accommodation within and must have been a lot less draughty during the winter months. The cabinet on the side wall housed the batteries for the telephone system that had been installed by the Great Western Railway following takeover and general reconstruction in 1905. 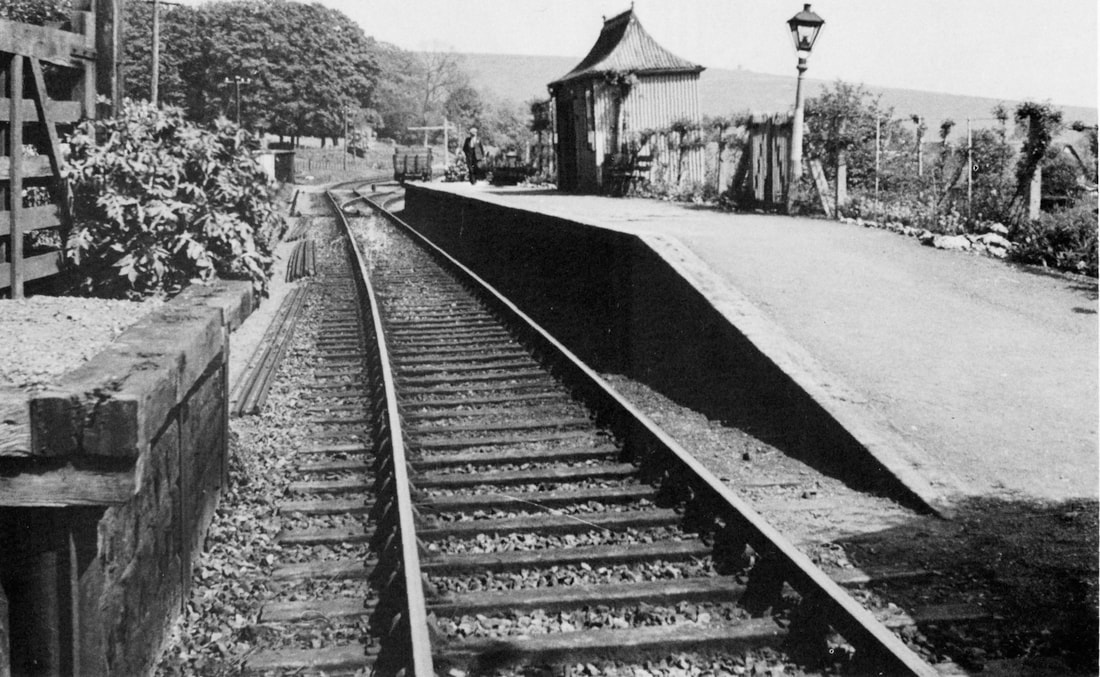 Above: The station circa 1950, looking towards Newbury. The loading dock is clearly visible (front left). It was used extensively in the early days for the loading and unloading of milk churns. Milk cartage provided a large percentage of the traffic handled at East Garston, but horse traffic from here was practically non-existent.

By the 1950s, the Great Western Railway's wooden fencing of 1919 had been replaced with concrete posts and wires. A double gate had also been added to allow for easier handling of small goods and milk churns, thus rendering the old loading dock virtually redundant.

The solitary figure on the far end of the platform is Tom Liddiard, probably returning from working in the goods yard or maybe from watering the many floral displays that bedecked the station every year, as seen above and below.

Photographed in the final years of its life, this view show the care and pride that went into the upkeep of this tiny station. The open air ground frame was one of two, appropriately named "North" and "South", that controlled access to the siding, while the concrete sleepers that ran the length of the platform were thought to be the first used on the line. The ground frames were both locked and released by the electric train token, and were type 'D' with frame pattern '6W'. 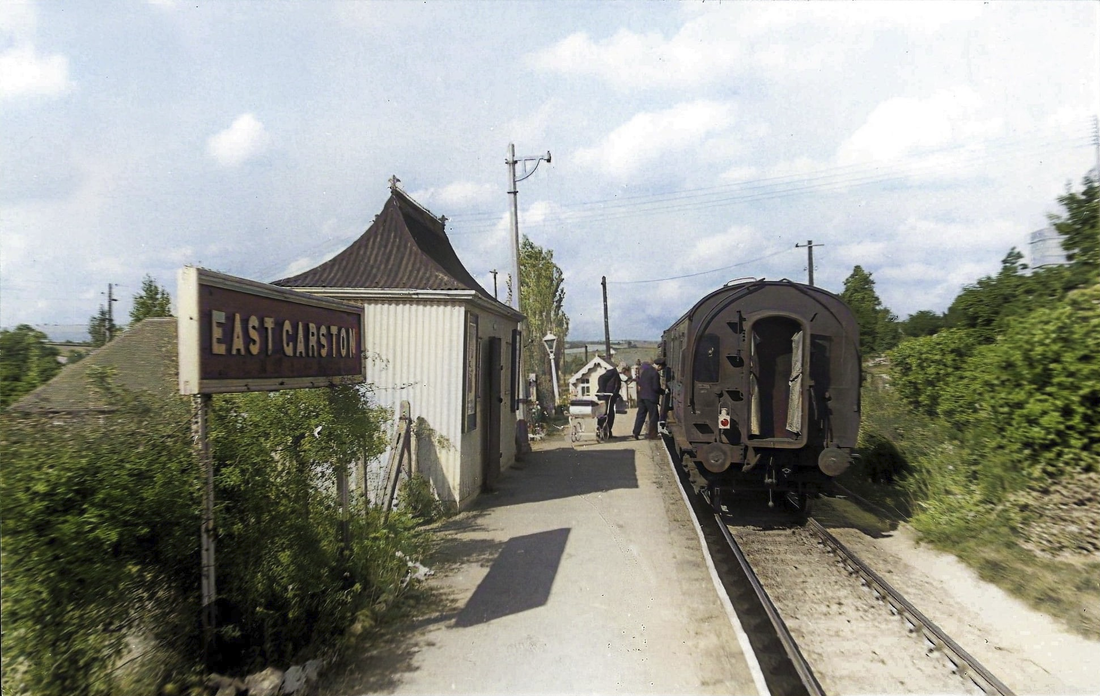 September 1959: Porter Tom Liddiard and the guard negotiate the off-loading of a pram from the luggage compartment of a Lambourn-bound train. Thanks are due to an individual on the Lambourn Facebook group who appears to have discovered and scanned this colour image, replacing what was a low-resolution monochrome image.
Above: Winter and summer at East Garston

The railway line had a major impact on East Garston. It formed the northern boundary of the village and was a key method of transporting in supplies, particularly coal. Four coal merchants from the area received supplies in the yard. They were Messrs. Bracey and Messrs. Flowers, Mr. Barnard of Eastbury and Mr. Bates. A small galvanised shed within the village passed as an office for the firm of Bates, while wagons belonging to 'Butler's of Swindon' and 'Toomer's & Co. of Reading' were used by Bracey's and Flowers for inward cartage.

The need to operate the level crossing gates ensured the station was permanently staffed from the very beginning. The GWR employed a Porter Class 1 from the outset, working a split shift from 7.30am to 1pm and 3.30pm to 8pm. Responsibility for the gates at all other times was that of the train guard, he was also required to oversee any necessary out-of-hours shunting operations. 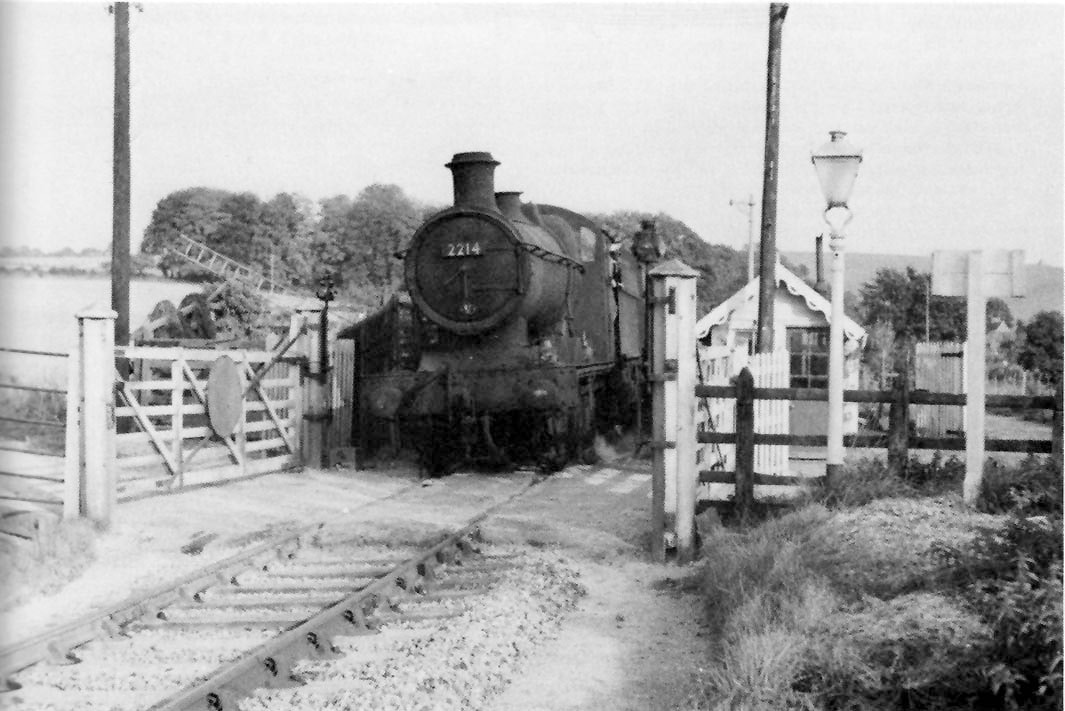 A Collett '2251' class engine No. 2214 departing with a Lambourn train in the late 1950s. The crossing gates were normally kept open to the road and across the running line. Red targets and lamps were the only protection for the road as fixed distant signals were not installed until 1957. Ultimately, they were positioned 550 yards in the up direction and 660 yards in the down direction. 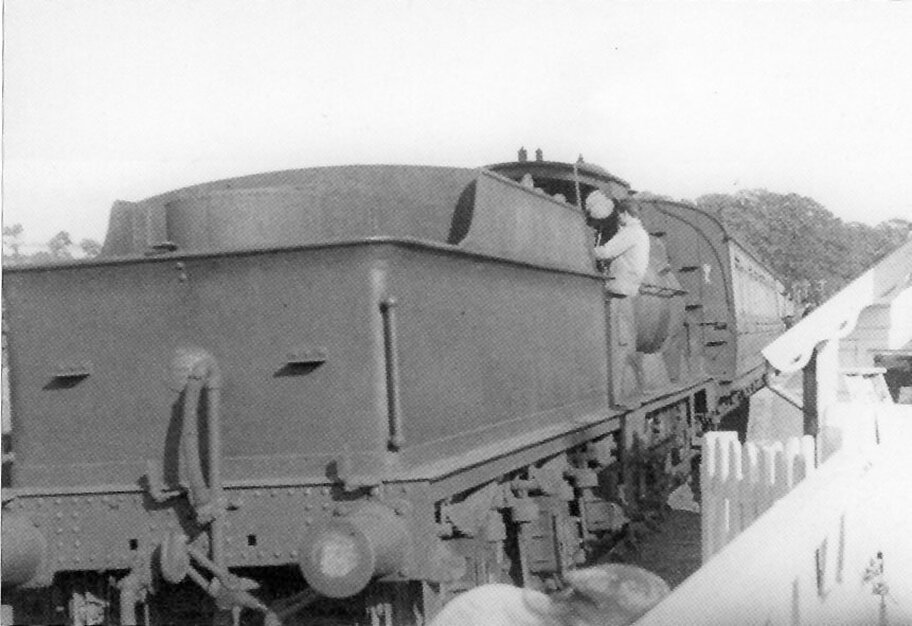 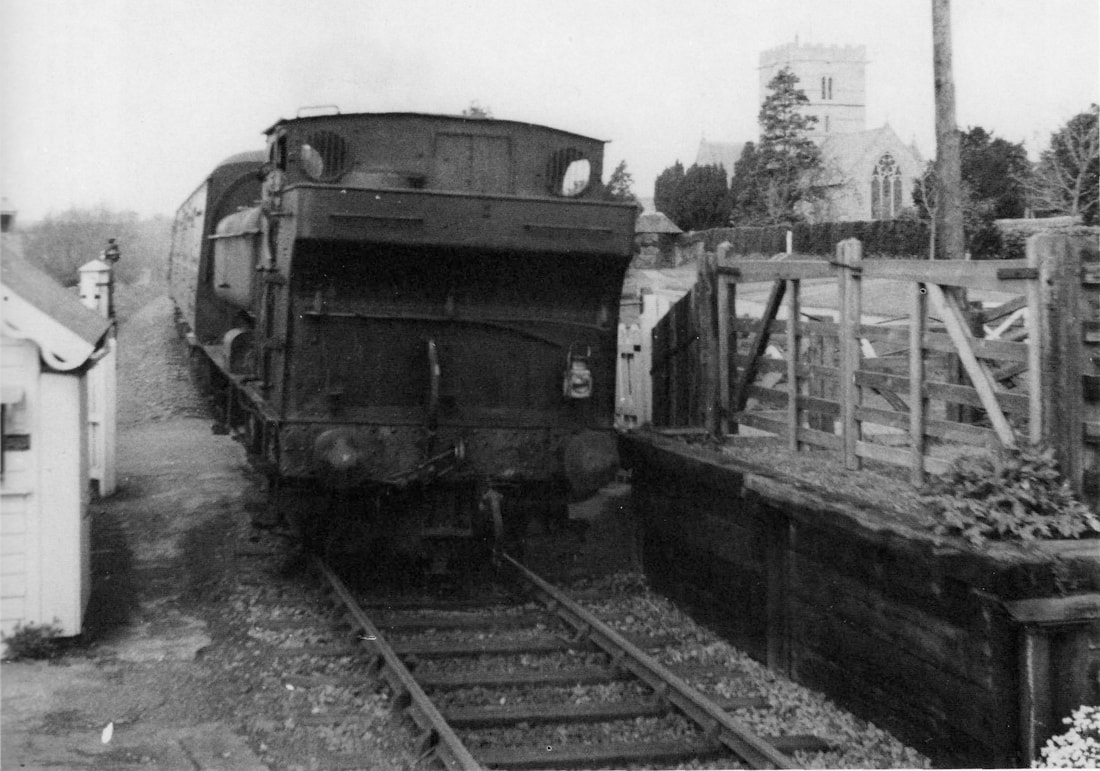 Destination Newbury: a pannier tank-hauled train passes the loading dock with All Saint's Church clearly visible from the station platform. 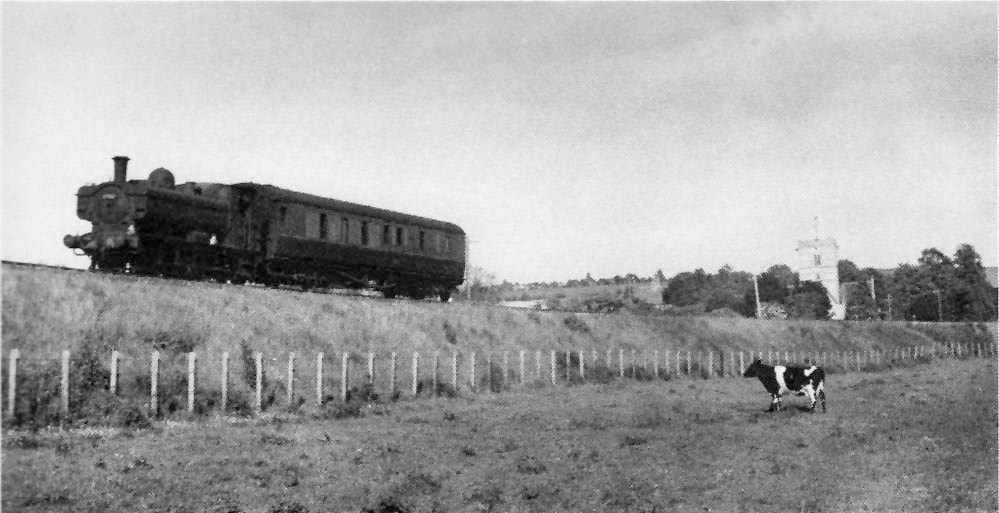 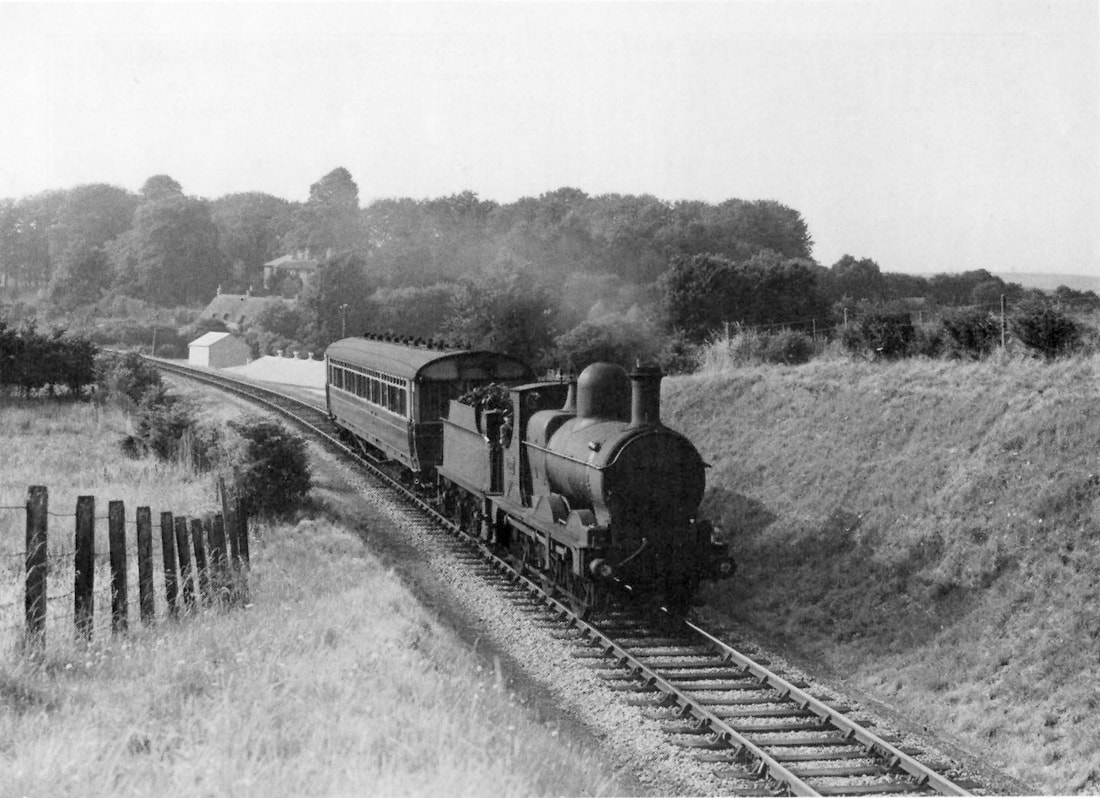 A Newbury-bound Dean Goods towing an auto-coach (which were never used as such on the Lambourn branch) enters the cutting after crossing the School Lane over bridge. In the background can be seen the row of thatched cottages that is now known as Trinity Cottage. To the rear of that lies The Old Rectory, while the farm buildings just below the embankment belonged to College Farm.

East Garston in context, as a Pannier Tank with its single coach is about to pass the landmark church