The railway had arrived in Newbury some 50 years before any notion of a branch line connecting it with Lambourn was raised. The opening of the Didcot-Newbury-Southampton route through from Didcot in 1882 and on to Winchester in 1885 brought many additional trains to the station.

December 1897 saw the completion of the Lambourn Valley line – as least far as the outskirts of Newbury, after which the GWR engaged Pearson's at a cost of £6,000 to continue the branch into the station, the track running parallel to the main line and into a bay at the western end of the main up platform. The GWR charged the LVR £50 per annum for the use of these facilities, plus interest at 3% per annum on the capital expenditure. 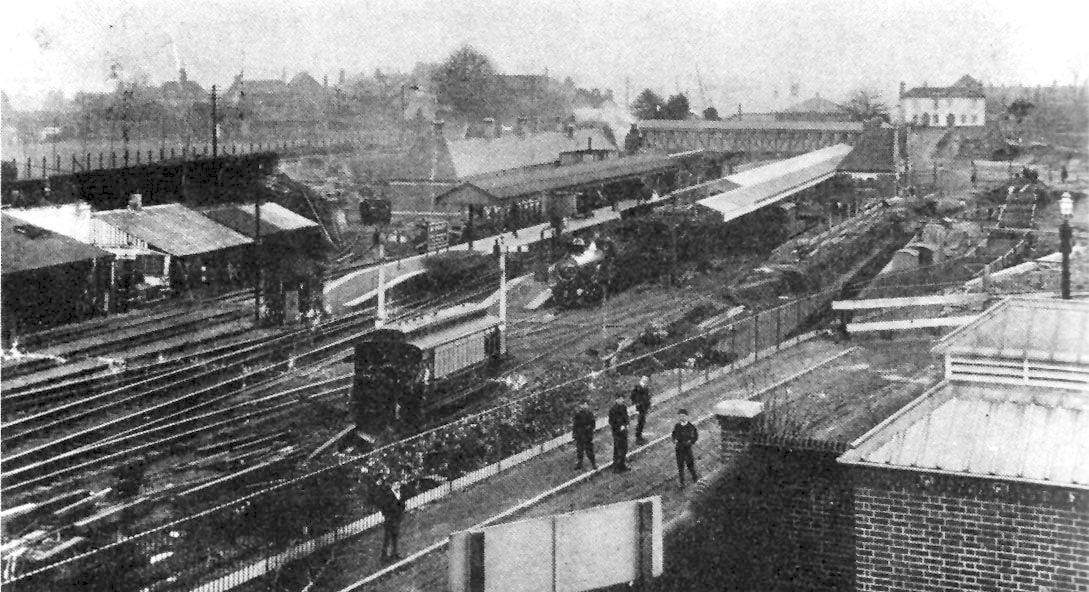 This shows rebuilding work ongoing from 1906-1909. This image shows how it looked after the work was completed.
The station had been designed for local needs but had grown to become a busy junction. All the additional traffic, plus the station's gloomy interior, brought about demands for change from passengers who disliked the dark and minimal space available.

So the green light for rebuilding the station was given in 1906, at an estimated cost of £60,000. It allowed for – among many other changes – two new platform loops either side of the main line, and bay platforms, with those on the up side to cater for Lambourn, Didcot & Reading services. The rebuilt station was furnished with new brick buildings and a covered footbridge, and was completed in the summer of 1909. Within two years of completion of this project, further additions were made, including an extension of the run-around alongside the Lambourn bay to form a van shoot and horse unloading facility. This new platform was 110 feet in length. 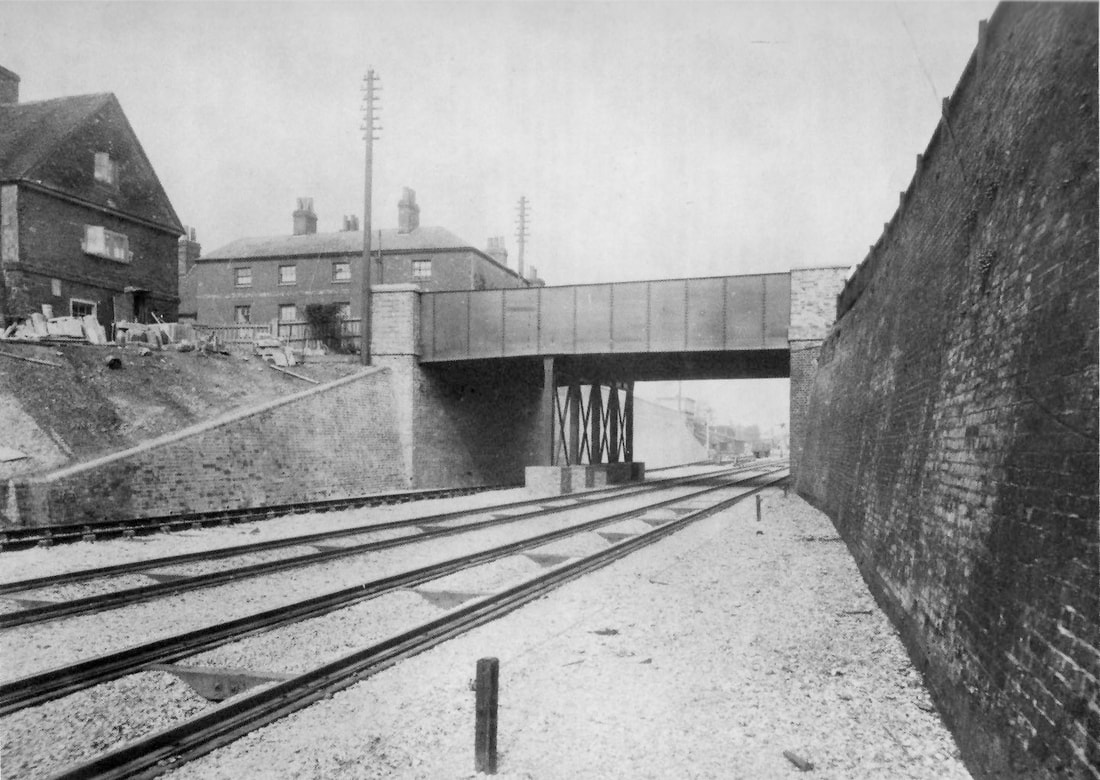 Looking back at Newbury from the west foregrounds the baulk road but standard gauge track portraying the GWR's heritage. On the far side on the left is the standard gauge, sleepered Lambourn Valley line. Under the Bartholemew Road bridge, the exit from the branch line bay is just visible in the background. 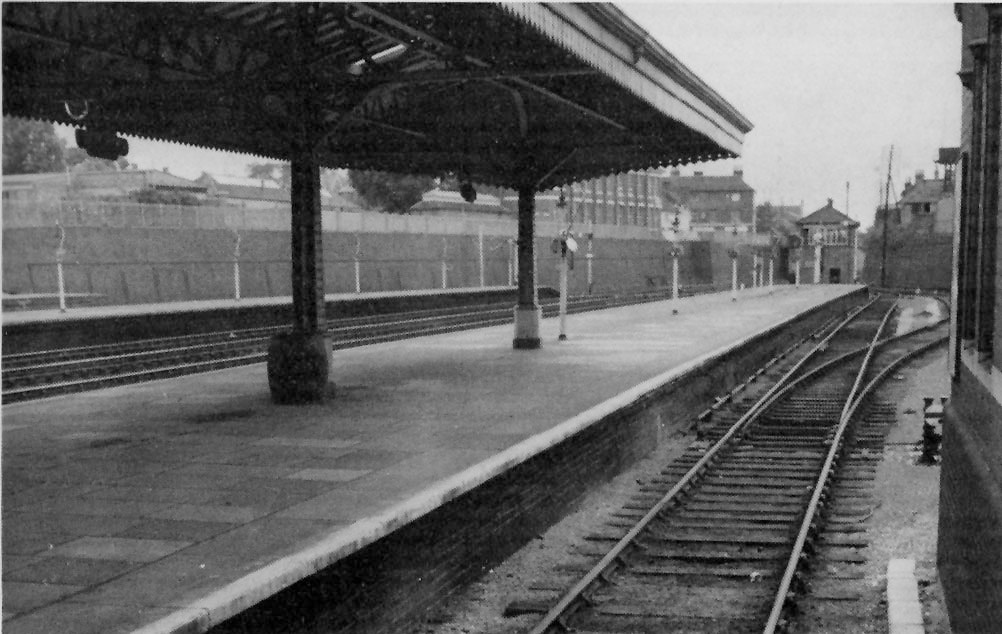 The Lambourn bay from the buffer stops, showing the short run-round loop. This end of the layout was under the control of the Newbury West signal box, seen at the end of the platform. Photo: Lens of Sutton 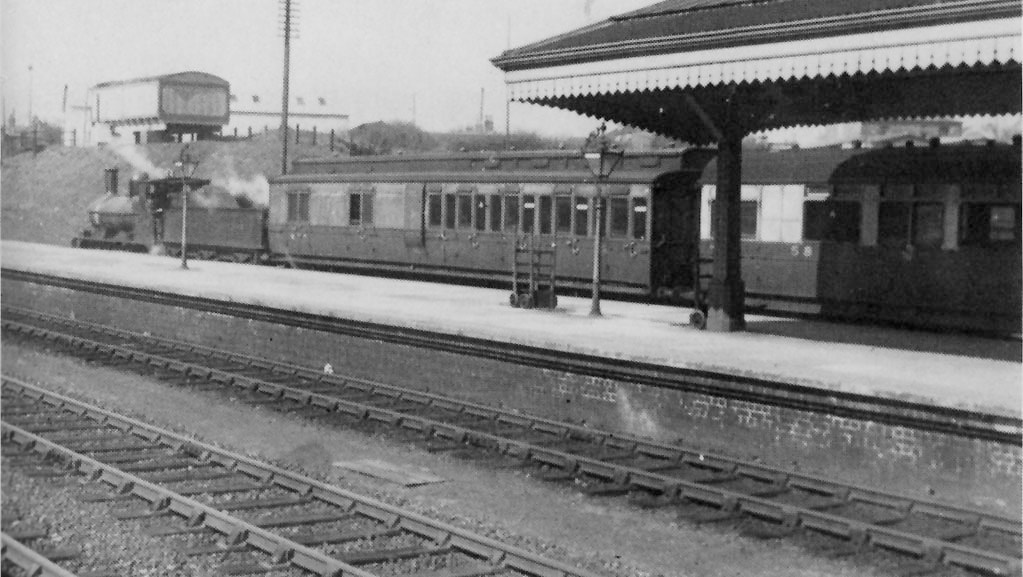 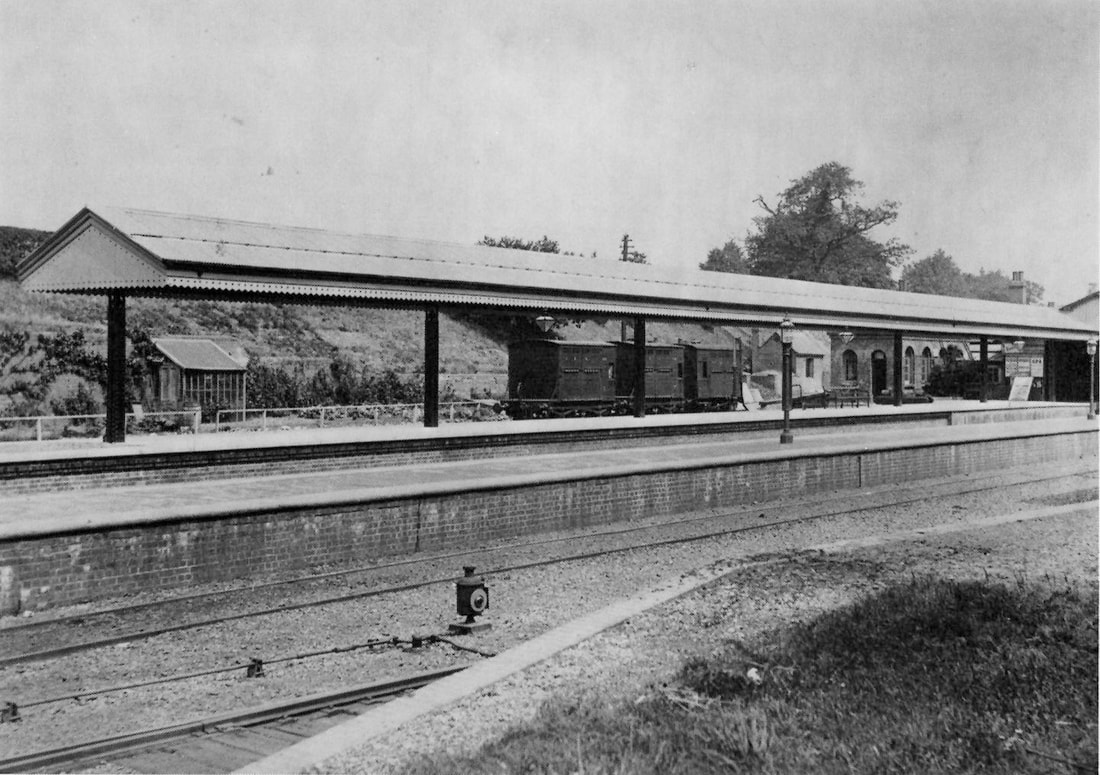 Looking across the station from the Lambourn bay. Photo: Pearson Collection 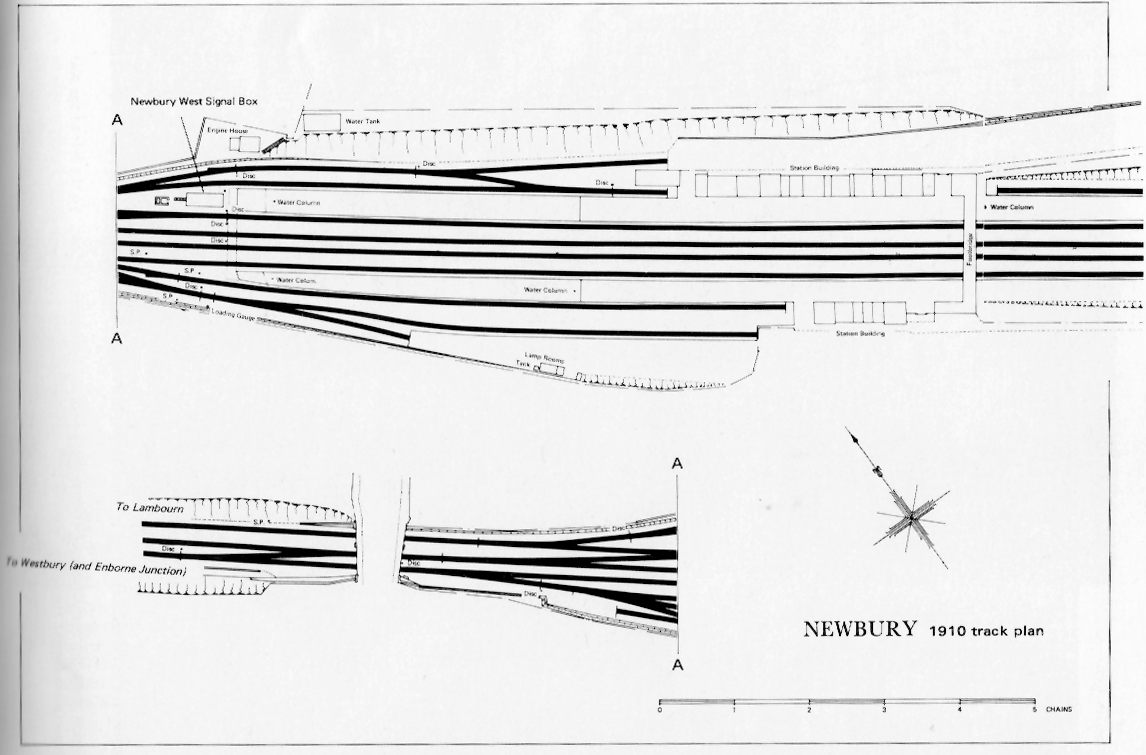 The station track plan from 1910 shows the Lambourn branch bay, run round and and water column towards the western end of the up platform 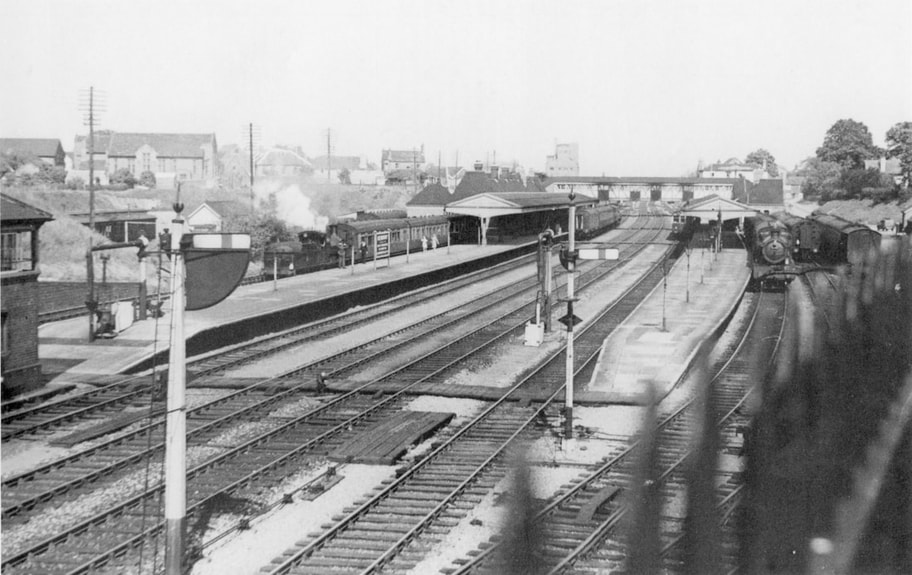 Looking east, a general view of Newbury station in 1950. The main lines continuing under the footbridge head for Newbury Racecourse. The Lambourn branch bay is on the left, with a two-coach train in the charge of a Dean Goods - which appears to be blowing off steam while awaiting departure. Newbury West signal box is just visible on the left. Photo: J. H. Russell
Most timetabled services off the branch terminated in the bay but they sometimes terminated on the up main platform for impending locomotive or stock movements. The LV line connection led directly to the up platform but a certain number of goods trains for the branch, for instance, ran wrong line from the yard. The bay included run round facilities and a water column, helping to ensure that branch line activities interfered as little as possible with main line traffic.

Newbury provided a number of services for the branch, including permanent way and signalling equipment maintenance. 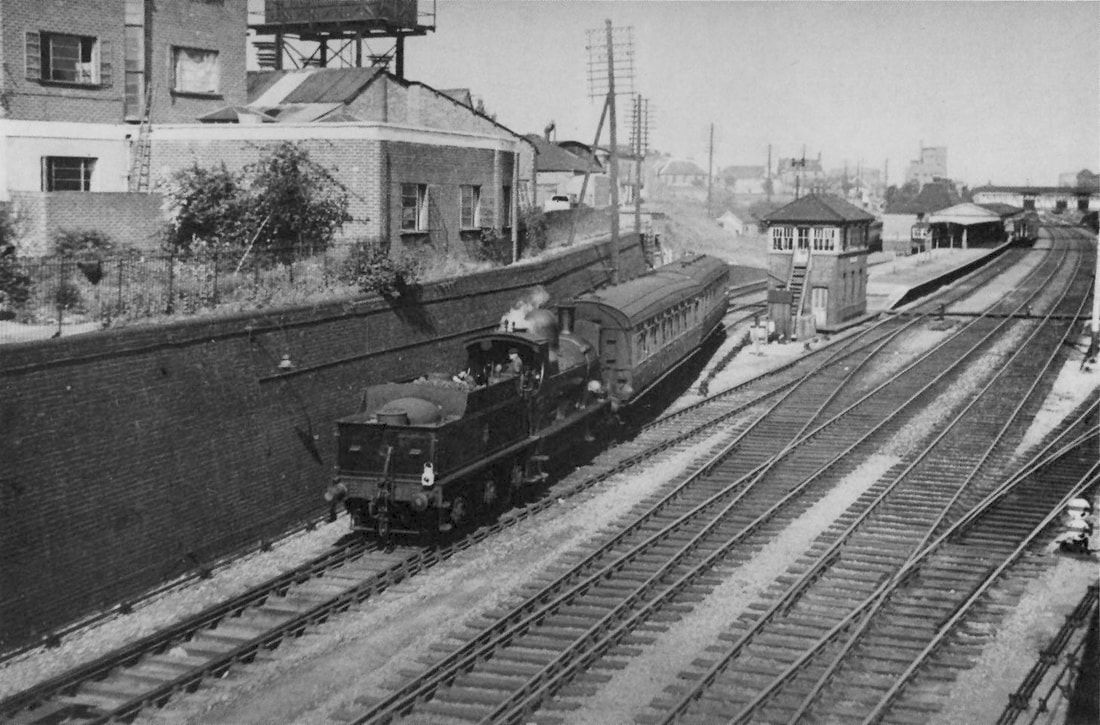 A lovely image of a branch line train, headed by a Dean Goods bringing its two-coach train bound for Lambourn past the signal box and onto the branch in 1950. Note the railcar in the bay, which will have brought the coaches off the branch. You can see the connection to the main line running into the up platform loop. To the right of the rear coach is one of the linesmens' huts. All the baulk road is, of course, a long time gone. Photo: P. J. Garland 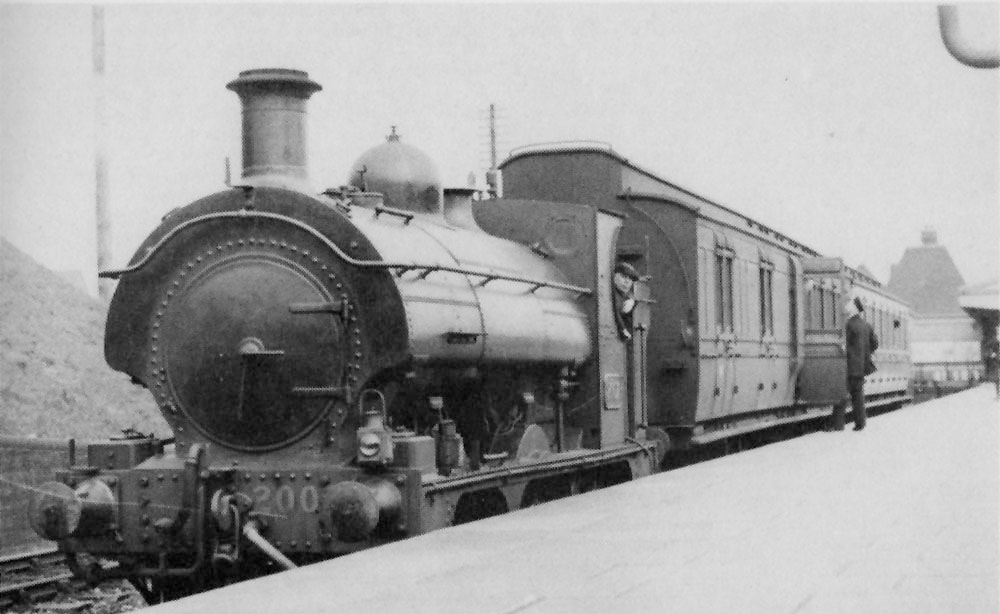 Saddle tank engine 2007 in 1937 awaits departure time before hauling its two clerestory coaches up to Lambourn. Withdrawn in 1949, this engine was one of the very few never to have been converted to a pannier tank. Photo: J. Smith 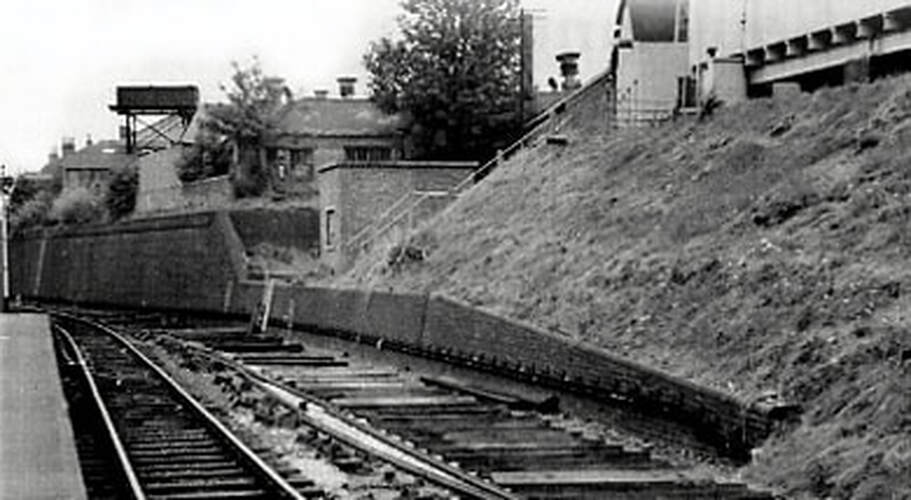 This image shows the bay in 1968 - some 30 years after the image above, and eight years after passenger services to Lambourn ended. The run round loop has already been lifted. This area eventually became the part of the station car park. Photo: D. Canning 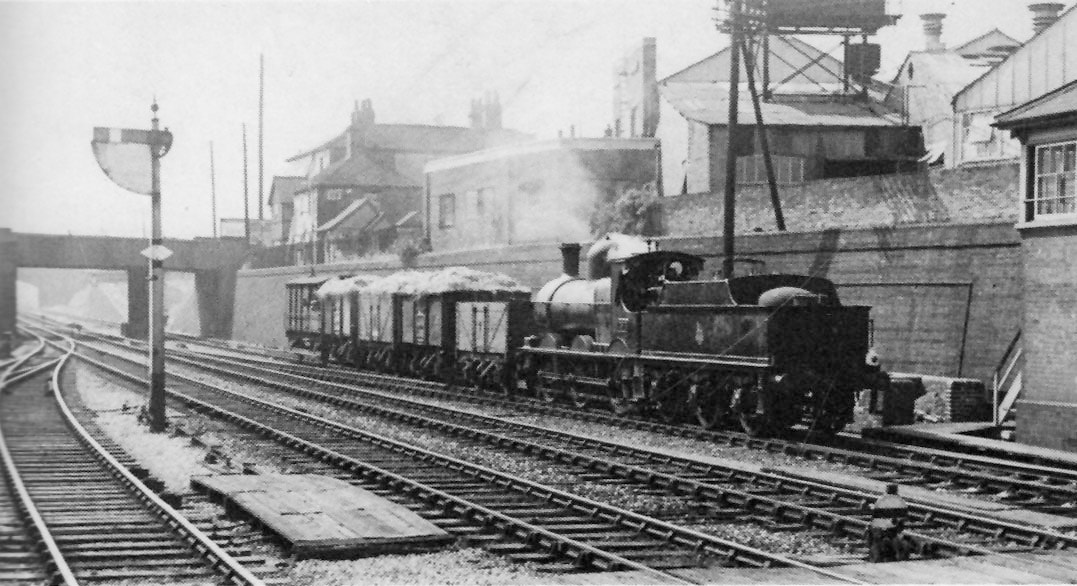 A Dean Goods brings the daily pickup goods train off the branch with what appears to be wagons of unsheeted - and thus highly flammable - straw - with only one distancing wagon between them and the engine. It would only have taken a stray spark! Photo: P. J. Garland 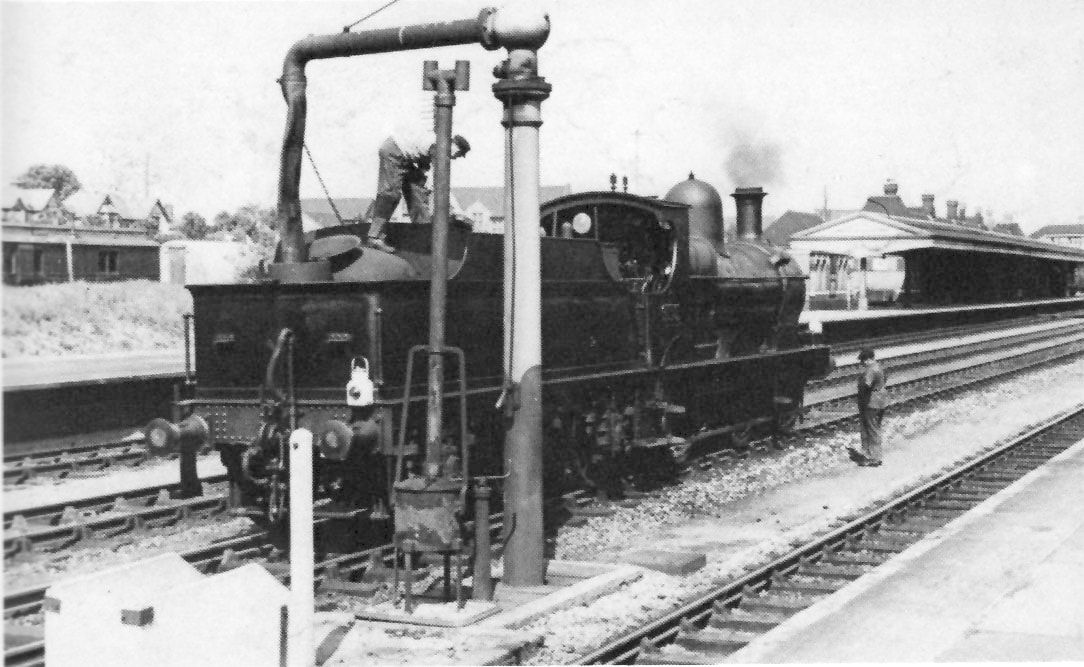 A Dean Goods takes water on the down main. Photo: J. H. Russell

The use of tender engines during the 1920s and 30s was mostly confined to Sundays. The crew would decide whether or not they turned their locomotive at Newbury Racecourse on the way to Lambourn or on the return journey. Photo: J. E. Kite

Dean Goods No. 2573 in the bay, with the railcar behind. Date unknown but probably late 1950s. Photo: R. M. Casserley 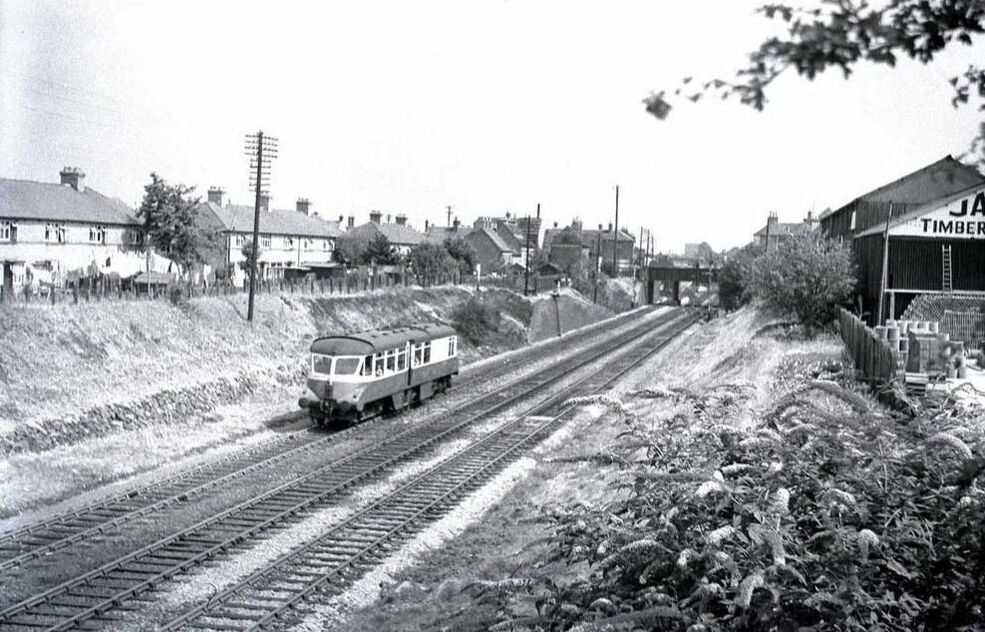 A diesel railcar heads west away from Newbury on the LVR branch. Photographer known, but dated precisely on 1 August 1955, said to have been a Bank Holiday Monday. 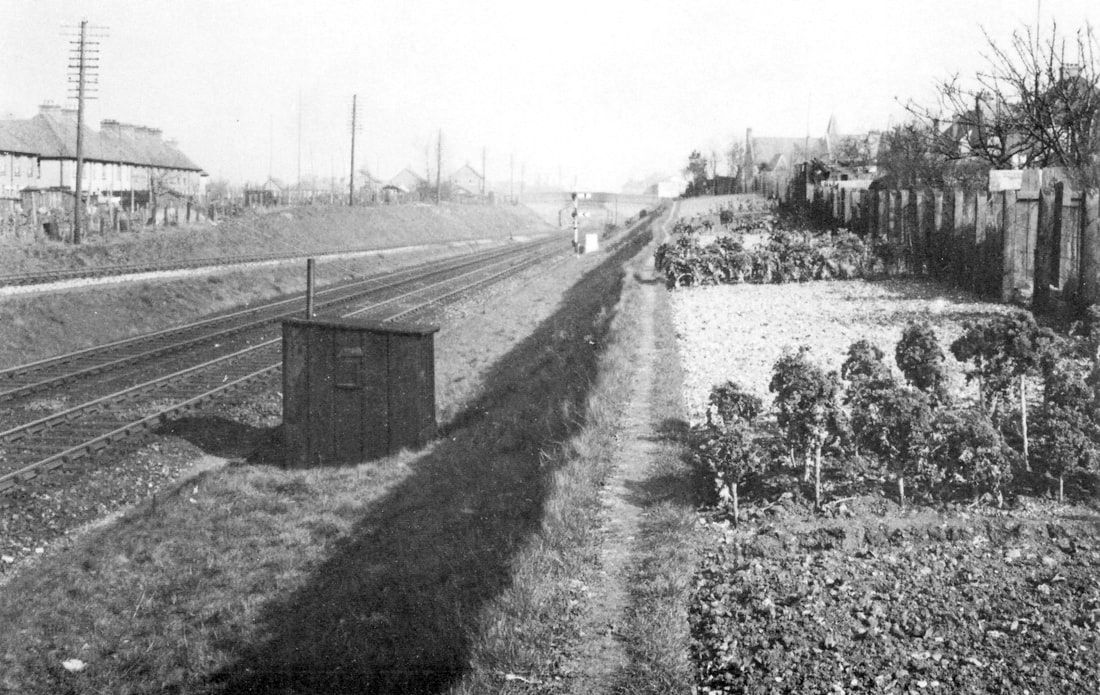 Looking east towards Newbury, the lack of a physical connection between the Berks & Hants and Lambourn lines beyond the station is evident. This view also vividly shows the branch line, left, climbing steeply away from the main line. Photo: British Railways 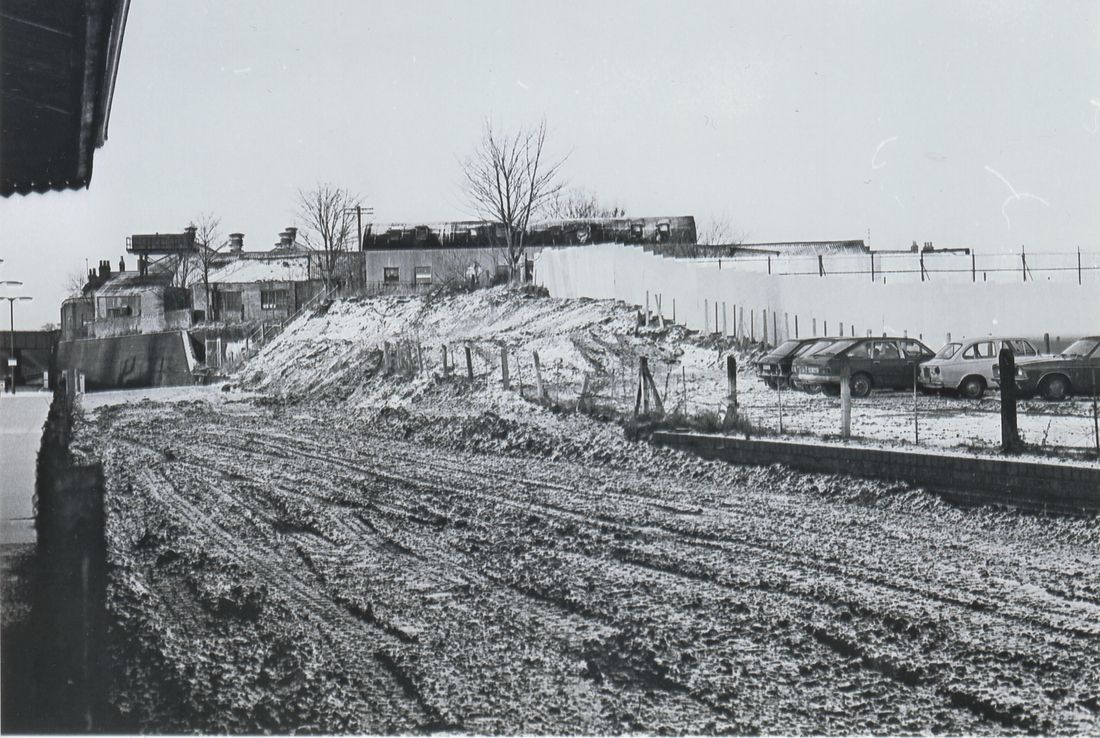 A sad sight. The Lambourn Valley branch line bay at Newbury in 1977, four years after the final closure of the branch. We're looking west, towards where the line used to be. This area is of course destined to become a car park. Photo: David Canning