Above: Post-1939 photo, looking north towards the village of Boxford. The requirements of wartime operation are clearly visible, such as blacked-out station lamps and blanked nameboard.

Just under three miles from Newbury, and barely three-quarters of a mile from Speen, the line descends gently into the Lambourn Valley on a 1 in 300 gradient. This isolated, out of the way stopping place was the station for Stockcross and Bagnor, sited almost exactly halfway between the two villages from which it took its name - and probably just as inconvenient from either place.

Even in Victorian times it was difficult to see the purpose of the station. Stockcross is about a mile away up a hill accessed by a narrow lane, while Bagnor is also about a mile away across the valley of the River Lambourn in the opposite direction and accessed only by a footpath, otherwise about two miles by road. Woodspeen is and was only a hamlet with a dozen or so residences. 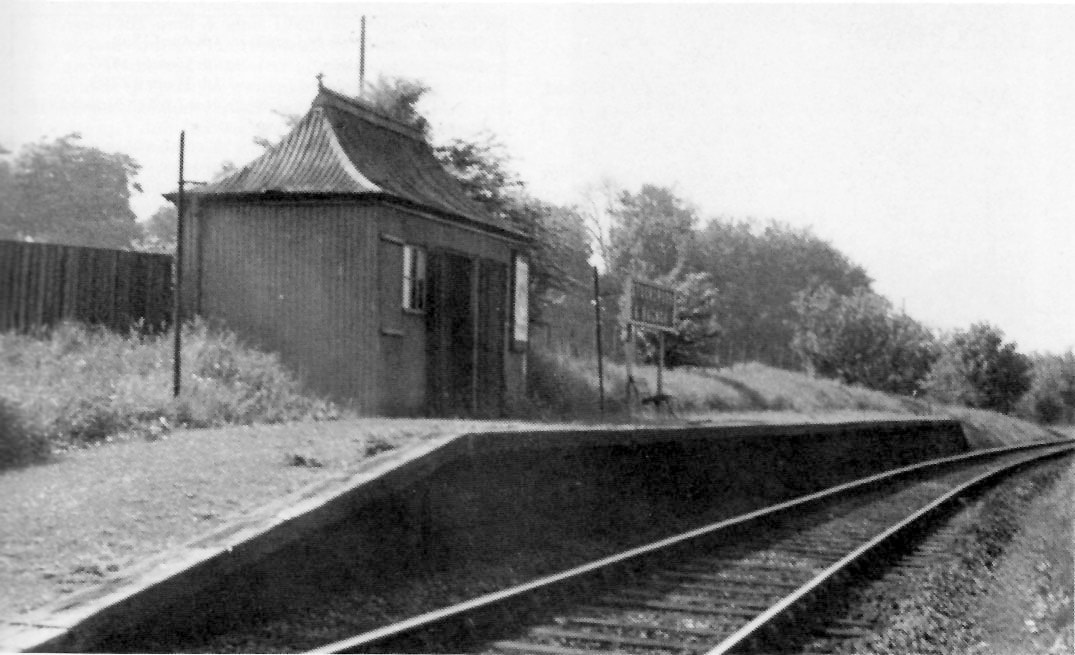 Referred to by the local residents simply as Stockcross, the station changed little over the years, but during the late 1940s, posts were erected either side of the shelter to allow the use of Tilley lamps, thus replacing the two outdated oil lamps.

The lamps themselves were kept at either Boxford or Lambourn and brought to Stockcross as and when required. The platform was topped with cinders and fine gravel while its leading edge was built of sleepers. Rails sunk vertically into the ground supported the entire structure throughout its length.

Travelling from Newbury, the line entered the station on an embankment, crossing a narrow lane by means of an iron bridge. Aptly called Snake Lane, the road twists and turns dramatically and if you have ever had the misfortune to actually drive along it, you will understand fully the reasoning behind the name. It runs from the Lambourn Road towards the village of Stockcross and is roughly a mile long. 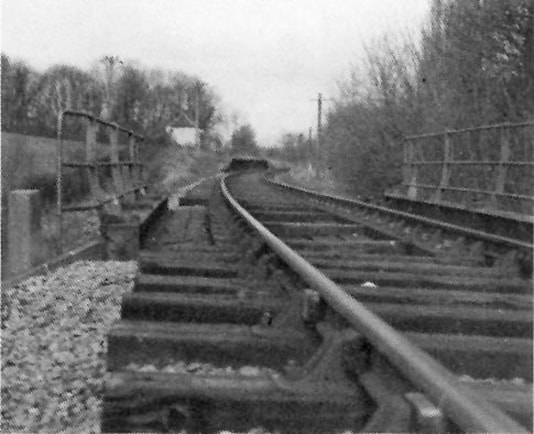 The line from Speen passed over Snake Lane below this bridge before reaching the quiet little station
Access to the station was marked by a single parking space, a gate and a small sign. From here a cinder and gravel path led up to the platform: a climb of 210ft to reach rail level.

During the independent LVR days, the station was staffed by a lad porter whose responsibities included the collection of tickets and parcel dispatch. From 1905, with the line now under the GWR, staff were no longer employed here, a lad being despatched from either Boxford or Speen stations to clean and maintain the site as required. Responsibility for the general upkeep of Stockcross would, in later years, ultimately fall on the Speen porter.
All passenger services were required to stop here with a time allowance of one minute for patrons to alight or board the train. This differed from the independent days of the LVR Company when trains would stop only if requested.

Goods traffic was very light consisting primarily of small quantities of milk and farm produce. Small parcels were delivered free by the porter to the area served by the station. Larger items would be left at Newbury to await delivery by carrier.

Interestingly, this tiny isolated station would, on occasions, play host to race horse traffic from nearby Marsh Benham stud. A horse-box would be ordered by Lambourn for attachment to the appropriate train. On arrival at the station, the horses were held on the cinder pathway until the train had stopped, before being led up to the horse box and loaded accordingly.
Stockcross and Bagnor Station opened for passenger and goods traffic on 4th April 1898 running through until the close of passenger services on 4th January 1960. From 5th January 1960 until 19th July 1965, goods traffic still moved along the line. Prior notice was required as special trains only were dealt with between these dates.