1898-1939
Above: A lovely panorama of Lambourn goods yard in 1898. Note the new engine and goods sheds, the LVR branded wagons, and the only view of what appears to be some sort of shed on the far right. With thanks to Kevin Robertson for the image.

On 31st March 1898, the Board of Trade inspection of The Lambourn Valley Railway took place. The inspecting officer Col Yorke declared that, subject to a speed limit of 25 miles an hour and axle loadings not exceeding 8 tons, opening of the railway was approved. The private opening was set for Saturday 2nd April 1898 and the full public opening for the following Monday 4th April.
Lambourn station on the day of opening showing the original timber water tank and the lightly laid trackwork. Track construction was used flat bottom rail spiked directly to the sleepers and then ballasted over. The first public service train into Lambourn hauled four Brown Marshall coaches that were purchased by the company chairman.
South Berkshire MP Mr. G Mount was aboard. His duty was to open the line officially on arrival at the terminus, and both he and Mr Gipps made the journey on the footplate along with the driver and fireman. Just 37 minutes after leaving Newbury, the train arrived in Lambourn, welcomed by a celebratory peal of bells from the parish church and music from a local brass band. Two further trips were made that day, each carrying around 80 fare-paying passengers. See the Independent years page for more images. 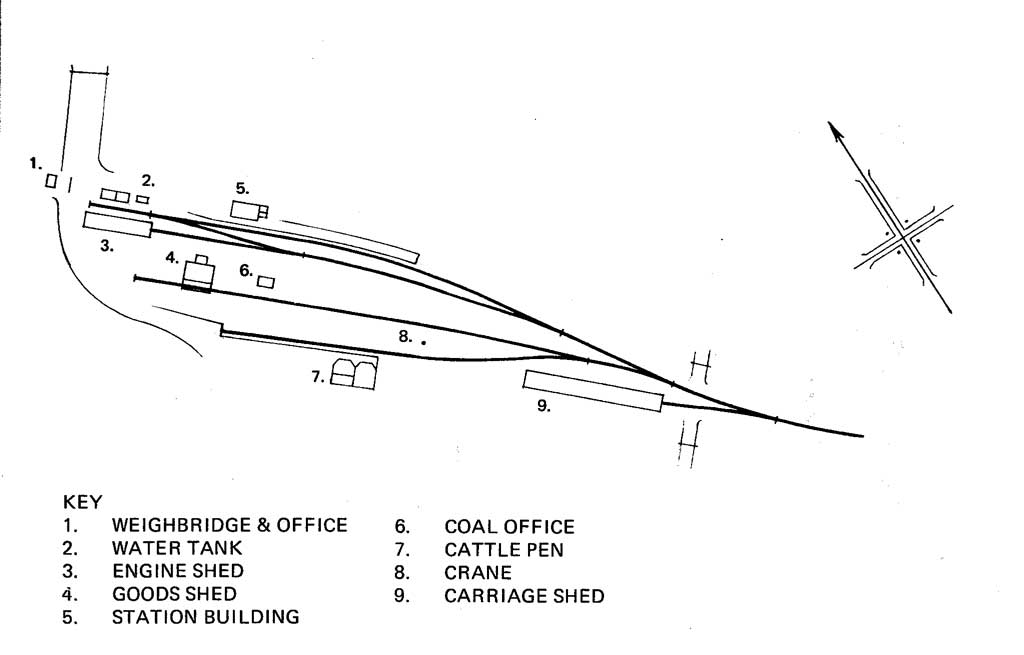 The original LVR Company track plan at Lambourn, which would change once the Great Western Railway took over... 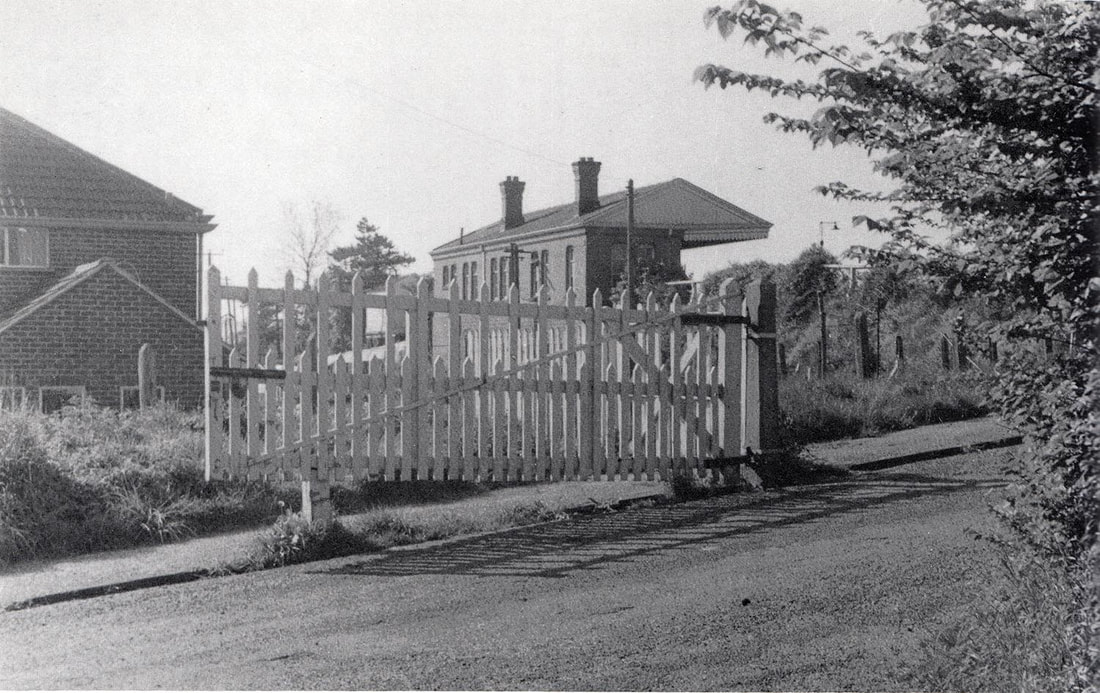 Access to the station was - appropriately enough - via Station Road through a 15' 6" single span gate. The rear of the station building was supported on brick arches while the steeply graded bank to the rear of the platform was inlaid with granite blocks for support.

The new owner now had control over 12¼ miles of cheaply built line, so the first job would be to bring it up to the GWR's exacting standards. Within two or three months, the line was relaid with pre-used material from GWR stock. The communication system was improved with the installation of two-way telephones linking Newbury to all the manned stations along the length of the line. Lambourn terminus also underwent a transformation during this extensive upgrading. 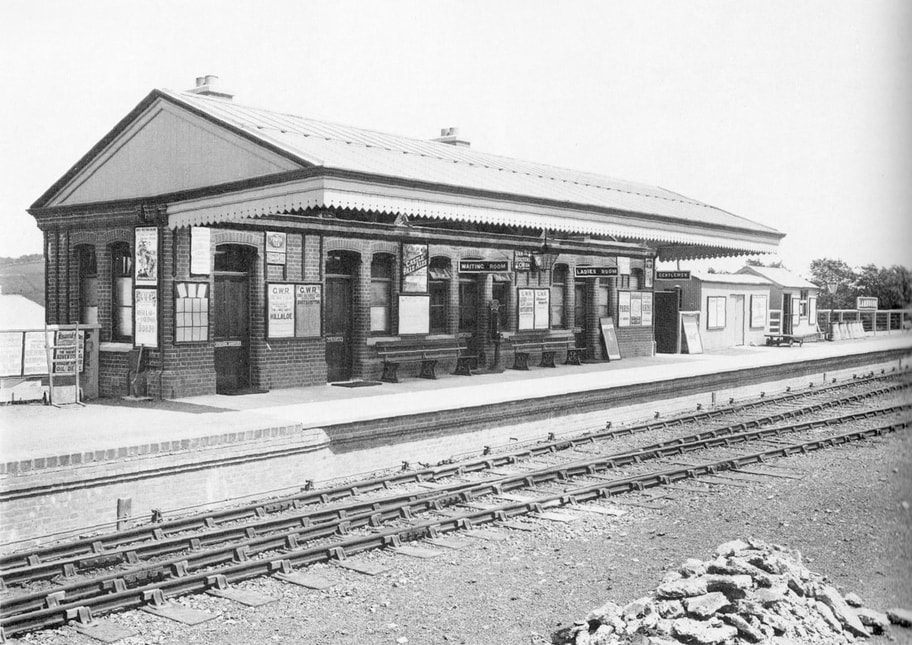 One of the first things the GWR did was to rebuild the station using a typical GWR template. This image is the official photograph of the new building, taken in 1910. The platform to the left of the building was visibly strengthened to take the weight of vehicles, because the only way lorries could load/unload directly onto passenger trains was via the platform ramp. 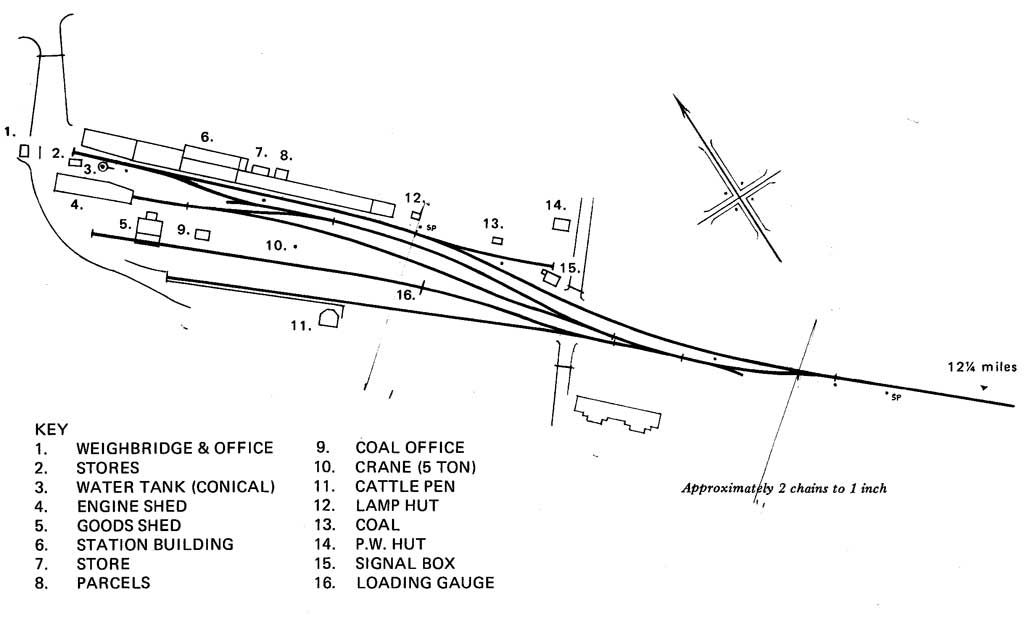 By 1911, the GWR had upgraded the track at Lambourn fairly substantially, adding a longer run-round loop, a longer headshunt beyond the platform, and an extra loop which allowed goods wagons to be parked without obstructing the loop. Compare this track plan with the one above...

By the 1920s, road transport was starting to affect the railway companies quite noticeably and in an effort to compete with the private transport operators, Great Western acquired a large fleet of its own road vehicles. Great Western's very first local bus service was inaugurated on 17th August 1925 and ran from Swindon to Lambourn, travelling via Stratton Park, Wanborough and Aldbourne. A second Swindon service was introduced on 26th July 1926 passing through Ashbury, Wanborough and Coate. This particular route lasted just three years, and was withdrawn on 6th July 1929.

Not much changed at Lambourn for the next decade or so, except for movement of the starting signal from the end of the platform further south near the signal box, in order to accommodate longer trains. That remained its location for the remainder of the line's life. And in 1936, the GWR closed the engine shed, with all engine maintenance and cleaning being transferred to Reading.

Lambourn's track layout and signal position changed in 1938: the signal box was lifted and the engine shed removed, but otherwise changes were few throughout the GWR's tenure.
Two almost identical views of 1901 saddle-tank loco class 2007 (above) as the crew prepares for a somewhat uncomfortably cold and draughty journey back to Newbury Station. The photos would have been taken in or around 1934. 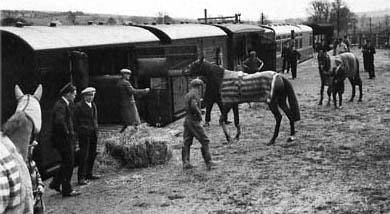 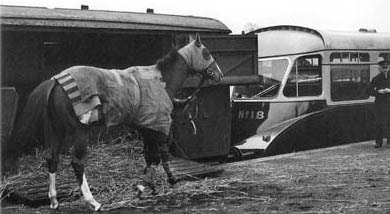 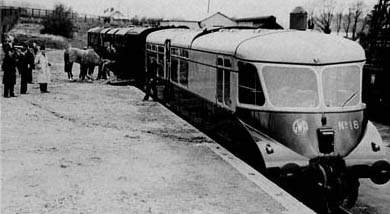 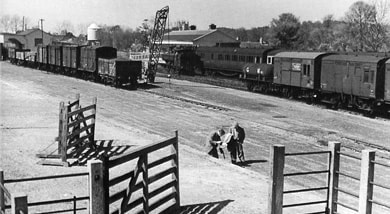 Lambourn has long been well-known for its connection with horse racing. Race specials were a common occurrence on the line especially throughout the 15 years between 1920 and 1935, a time when race traffic was at its pinnacle. Several of the Lambourn trainers had private horse boxes with their names sign-written on either side. These boxes were usually Paco 'A's which were dual-fitted for for working to Redcar or Newcastle over LNER tracks, where Westinghouse braking was a required commodity.

Railcar No. 18 (as seen in the images above) was ordered in February 1935, so this image dates at the earliest from that year. It was designed to haul a trailing load of 60 tons, the first of its kind to be uprated in this way in order to cope with additional loads, such as the horse boxes seen coupled up in this image. 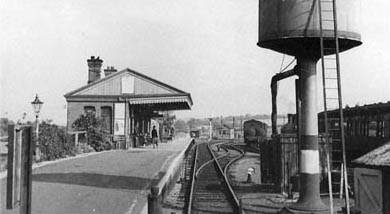 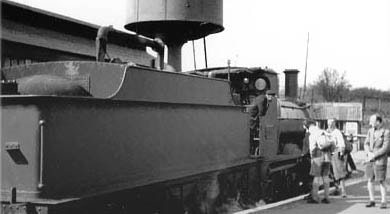 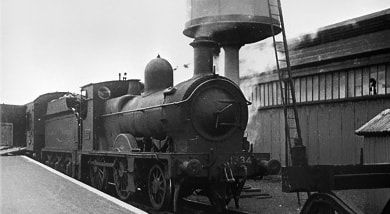 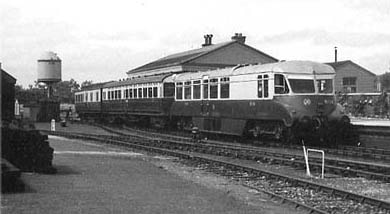 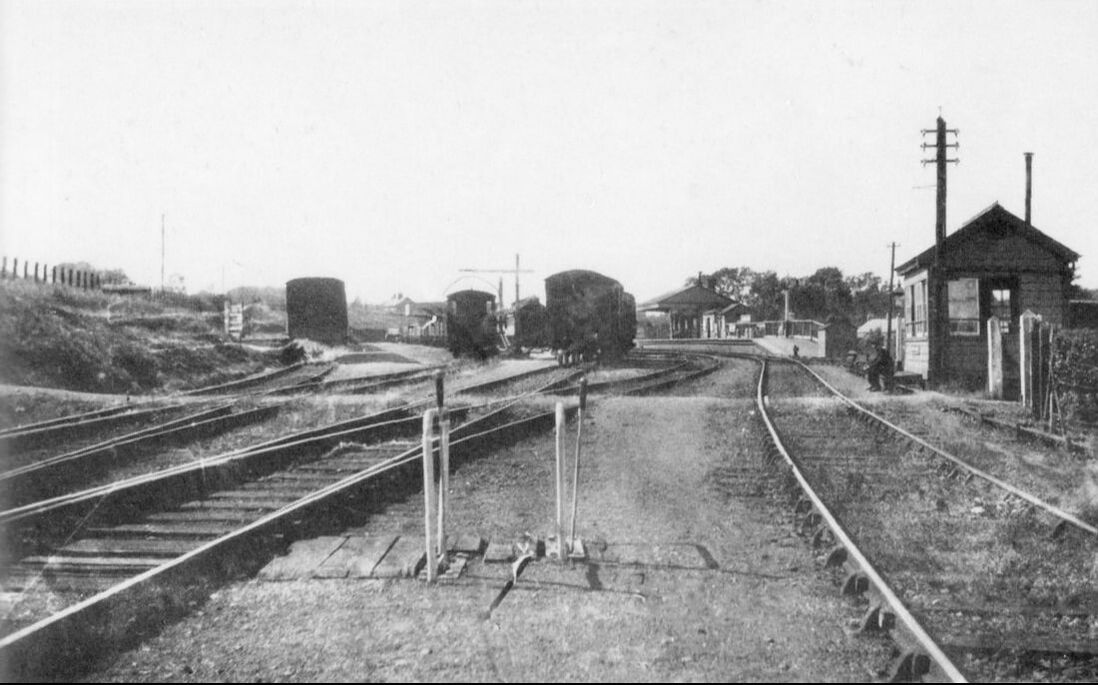 A glimpse of the station area looking towards the buffers, as the signalman enjoys the midday sun outside his box. We can tell that this photo was taken prior to 1938, as the siding behind the signalbox is still in situ, as is the engine shed. Photo: C. L. Mowat, courtesy Dr. R. Gulliver 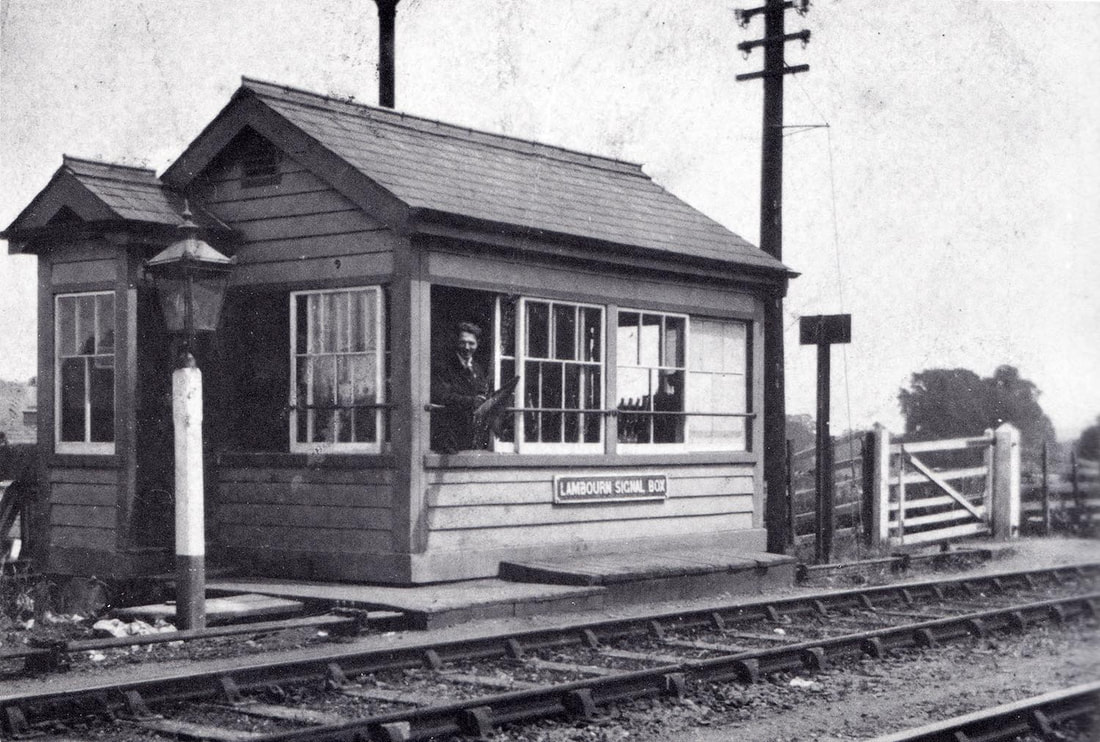 The Lambourn signal box dated from the new GWR station around 1910, to an 1890s design. It was 17-ft by 10-ft, excluding the porch. The gate provided access to a row of cottages on the other side of the line, access being gained via the occupation crossing just visible on the right of this image. The lamp, built to facilitate single-line token handovers, probably disappeared around 1938 when the GWR tweaked the track plan, and removed the siding behind the signal box. Photo: Geoffrey Allan Collection 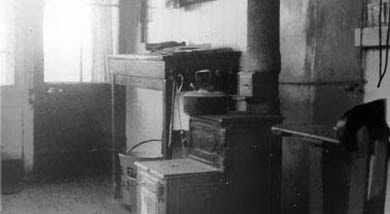 The signalman's comforts included a stove, cupboards, desk and chair. The business end of the box contained a stud locking frame with 20 levers at five-inch centres. This view (above right) taken in 1938 also shows nine spares (painted white). Other signalling equipment included a No. 9 token instrument for the section of line to Welford; it replaced the earlier tablet instrument. Such a simple box was for many years classified 6 in the GWR grading system, Class 1 being the highest. 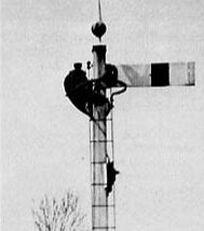